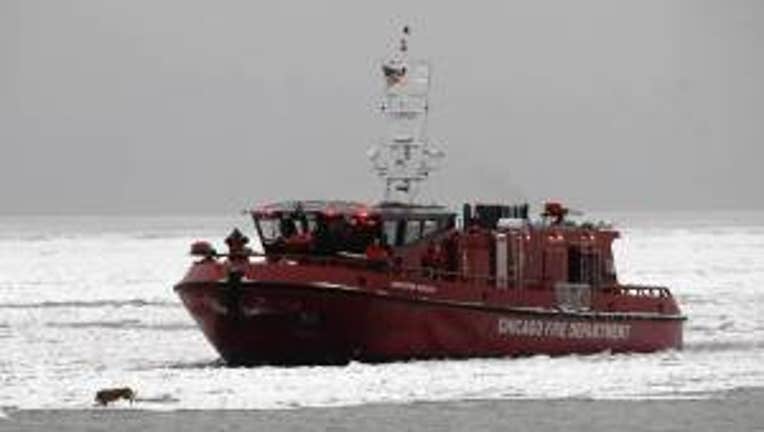 Chicago firefighters attempt to rescue a dog that had been running along the ice far into Lake Michigan around 7100 N. Sheridan Road. — (Brian Cassella, Chicago Tribune, Feb. 22, 2013)

CHICAGO -- It was a frightening dog day afternoon in Chicago Friday for one pooch that got stuck on an ice floe on Lake Michigan a half-mile off shore, kept falling through the ice into the freezing water, and then found itself being pursued by a helicopter, a huge fire boat and even a kayaker.

Divers were already on Chicago’s North Side pulling a woman in her 20s out of the lake when someone spotted the stricken dog about 3:20 p.m. off Pratt Avenue, according to a Chicago police Marine Unit officer.

The dog was almost a half-mile out and had likely gotten there because the ice was shifting after slightly warmer temperatures Friday afternoon, he said.

First, a helicopter was sent to the scene and hovered above to ensure it was a dog and not a coyote. Also, the air movement and sound from the helicopter's rotors sometimes spurs an animal to move, hopefully closer to shore, the officer said.

Chicago Fire Department crews were also sent to the scene, and a fire boat pursued the dog for a short time.

As rescuers were setting up a spool with a thick lifesaving line that can extend several hundred yards to enable a diver harnessed to it to crawl out on the ice, a man on a kayak pitched in. He paddled through the ice chunks toward the dog in an effort to rescue it.

The freaking dog had enough.

"I just kept encouraging him," said the kayaker, Dave Kehnast, in an interview with WGN-TV. "'Here boy, here boy,' and he wanted to bite me! So I kind of just kept on him," until the dog headed to shore.

The frightened dog jumped into the freezing water and then made its way through the ice and water, swimming safely to shore. The entire incident lasted about an hour.

Other city workers tried to help corral the frightened dog once it was on shore, but it ran off.

An animal control agent finally captured the dog with a long pole and noose.  Authorities said the dog was fine.