A video shows the AirCar completing a 35-minute flight on June 28, 2021, between international airports in Nitra and Bratislava, Slovakia. Credit - Provided via Klein Vision

BRATISLAVA, Slovakia - A prototype flying car completed a 35-minute flight this week between international airports in Slovakia, fulfilling what developers called "a key milestone" in moving toward production.

The dual-mode car-aircraft, called AirCar, flew on Monday between international airports in Nitra and Bratislava. It was AirCar’s first inter-city flight and 142nd successful landing, according to Klein Vision, the company behind its development.

It takes less than three minutes to transform from a road vehicle into an aircraft — and vice versa. Upon landing, a video shows the aircraft’s narrow wings fold down along the sides of the car and become ready for the roadway.

"The automated transition from road vehicle into an air vehicle and vice versa, deploying/retracting wings and tail is not only the result of pioneering enthusiasm, innovative spirit and courage; it is an outcome of excellent engineering and professional knowledge," Dr. Branko Sarh, Boeing Co. Senior Technical Fellow, said in a statement. 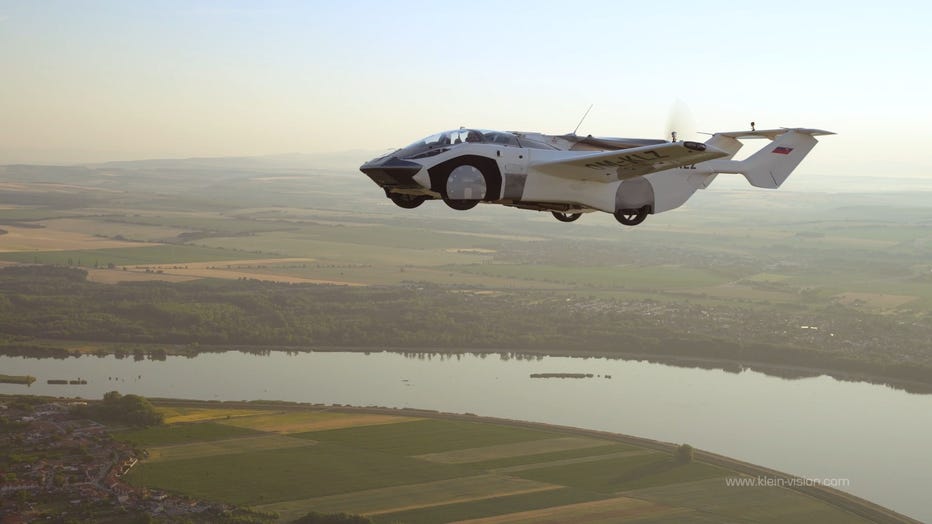 The hybrid car-aircraft, called AirCar, is pictured during a 35-minute flight on June 28, 2021, between international airports in Nitra and Bratislava, Slovakia. (Photo credit: Provided / Klein Vision)

The AirCar’s first prototype is equipped with a BMW engine with a fixed-propeller and ballistic parachute.

The hybrid car-aircraft has logged more than 40 hours of test flights, including steep 45 degree turns and stability and maneuverability testing, the company said.

The prototype was the decades-long dream of Professor Stefan Klein, who "devoted the last twenty years converting his flying-car dream into reality." The AirCar model took about two years to develop and cost "less than 2 million euros" to develop, the company told the BBC.

Klein Vision sees the flying car as having a "huge market," with a goal of attracting even a small percentage of the global airline and taxi sales.

"There are about 40,000 orders of aircraft in the United States alone," Anton Zajac, Klein Vision’s co-founder, investor and pilot, told the BBC. "And if we convert 5% of those, to change the aircraft for the flying car - we have a huge market."

Klein Vision said the second AirCar prototype, the pre-production model, would be equipped with a 300 horsepower engine and receive the EASA CS-23 aircraft certification with an M1 road permit.

The company said it aims to turn "science fiction into reality" and offer people a more convenient way to travel.

"With Aircar you will arrive at your destination without the hassle of getting a ride to airport and passing through commercial security, you can drive your AirCar to the golf course, the office, the mall or your hotel and park it in a normal parking space," Zajac said in November.

RELATED: Miami building to have sky port for residents to park their flying cars