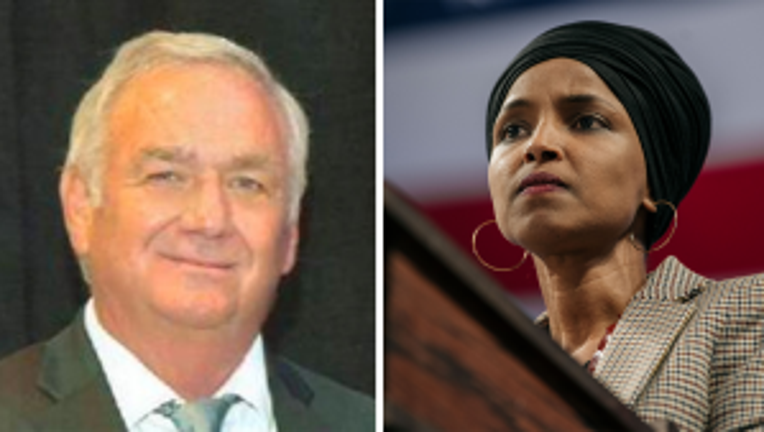 ST. PETERSBURG, Fla. (AP) — Local and national GOP leaders distanced themselves Wednesday from a Florida congressional candidate who sent a fundraising letter stating that “anti-American radical Democrats” should be hung for treason.

George Buck, one of six Republican primary candidates for Florida’s 13th Congressional District, referred to several Democrats but in particular to Congresswoman Ilhan Omar, D-Minnesota. Omar was born in Somalia and came to the U.S. as a child.

In the recent letter to potential donors, he said that “we should hang” Omar and other “traitors” for “abusing our system to destroy our country.” He mentioned “tinfoil hat accusations” against President Donald Trump, but didn’t elaborate.

Buck’s letter cited an unverified story that Omar is an asset of a foreign government who passed information to another foreign government. Omar has denied the report, calling it ”outlandishly absurd” in a statement.

“For all their false, tinfoil-hat accusations of President Trump, the Democrats have foreign assets among their most outspoken leadership!” the letter read. “We should hang these traitors where they stand. I have no tolerance for those who are abusing our system to destroy our country.”

Buck previously had been on the National Republican Congressional Committee’s “Young Guns” program, which mentors and supports candidates in races across the country. Chris Pack, the committee’s communications director, said in an email Wednesday that House Majority Leader Kevin McCarthy decided to remove Buck from the program with the support of NRCC Chairman Tom Emmer.

Todd Jennings, chairman of Republicans in Pinellas County, linked via Facebook to a Tampa Bay Times report on the letter, and wrote: “There is no room for this kind of rhetoric in either political party. No one should ever condone a candidate’s call for violence.”

The 13th Congressional District is in Pinellas County, on Florida’s Gulf Coast. It encompasses the city of St. Petersburg, which is also the hometown of the incumbent Democrat, Charlie Crist, a former Florida governor. Whoever wins the GOP primary in 2020 will face Crist again.

Buck did not respond to an email sent via his website or to a telephone message. Buck initially told the Times he didn’t write the email, though it was signed by him. “I would never talk like that,” he said.

In a follow-up statement, Buck appeared to stand by the campaign’s email. “Anyone who commits treason against the United States should be tried to the full extent of the law,” Buck said, adding that death is a possible punishment for treason. He declined to elaborate.

Buck was the GOP nominee in 2018, but lost the general election to Crist, a St. Petersburg Democrat who was a Republican when he was the state’s governor.

Tony Di Matteo, the former chairman of the Pinellas County Republican Party, said he didn’t think the negative rhetoric would help Republicans raise campaign funds for the race. But he said the eventual GOP winner will face a formidable opponent in Crist.

“Bashing someone that’s in the state of Minnesota, I don’t think that helps you in Florida,” he said. “And my opinion, even with Trump at the top of the ballot I don’t think anyone’s going to beat Charlie Crist. He’s a tremendous campaigner and raises a lot of money.”