SURFSIDE, Fla. - The bodies of six additional people were found in the rubble of a collapsed condo tower in Surfside, Florida, bringing the death toll to 18, officials said Wednesday.

Two of deaths reported on Wednesday afternoon were children.

Families were informed at a morning briefing that rescuers found the bodies on Tuesday night during the ongoing search at the site. Miami-Dade Assistant Fire Chief Raide Jadallah said relatives had not yet been notified.

In addition to the six bodies, crews also found other human remains. Rescuers were able to build a ramp for a crane to reach areas at the top of the pile they had not been able to access before, Jadallah said.

A wing of the 12-story Champlain Towers South came down around 1:30 a.m. on June 24 in the town of Surfside, located just north of Miami Beach. Nearly 145 people are still unaccounted for.

The discovery of the bodies came after Florida officials asked for an additional rescue team to help in the search for those unaccounted for amid the possibility of severe weather.

Kevin Guthrie of the Florida Division of Emergency Management said officials asked the federal government for the additional team, which would likely come from Virginia, amid two disorganized storm systems in the Atlantic.

The new team would be on hand if severe storms hit the area in the coming days and would allow crews that have been working feverishly to rotate out. Authorities said it’s still a search-and-rescue operation, but no one has been found alive since hours after the collapse.

A visibly emotional Rep. Debbie Wasserman Schultz asked for a moment of silence today on Capitol Hill to honor those affected by the Florida condo collapse.

The National Hurricane Center said the two storm systems in the Atlantic have a chance of becoming tropical systems in the coming days, but it is unclear at this point whether they would pose a threat to the U.S.

Regardless, officials are keeping an eye out for the area prone to tropical weather.

President Joe Biden and first lady Jill Biden will visit Surfside on Thursday, speaking with families and the teams combing through the mound of concrete, twisted steel and remnants of households. 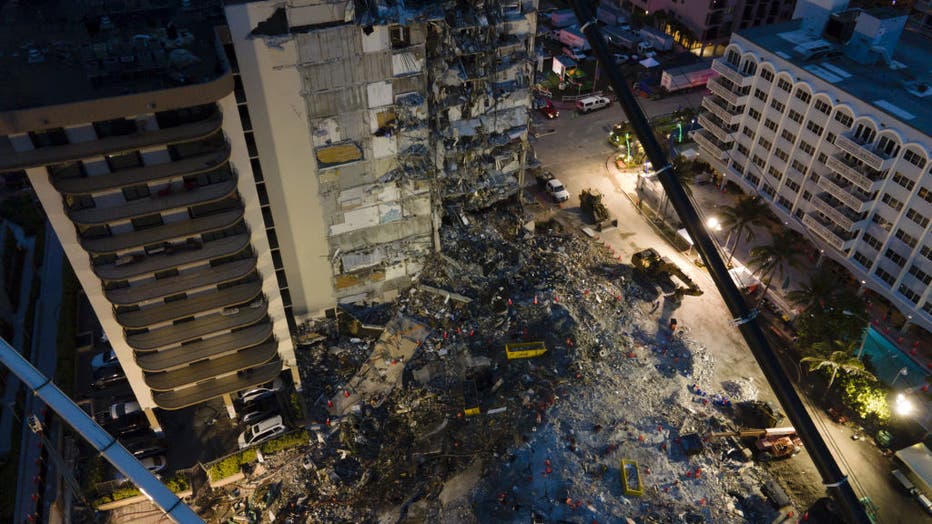 An aerial view of the site during a rescue operation of a 12-story Champlain Tower partially collapsed in Surfside, Florida, on June 29, 2021. (Photo by Tayfun Coskun/Anadolu Agency via Getty Images)

The rescuers, described as among the best and most experienced in the world, continued the slow work of sifting through the pile — a deliberate and treacherous effort that has now extended into the seventh day. The pancake collapse of the building left layer upon layer of intertwined debris, frustrating efforts to reach anyone who may have survived in a pocket of space.

Elected officials have pledged to conduct multiple investigations into the sudden collapse of the Champlain, which was built in 1981. Another victim was recovered Tuesday, bringing the confirmed death toll to 12.

Gov. Ron DeSantis evoked a well-known military commitment to leave no one behind on the battlefield and pledged to do the same for the people still missing in the rubble.

"The way I look at it, as an old Navy guy, is when somebody is missing in action, in the military, you’re missing until you’re found. We don’t stop the search," DeSantis said at a news conference Tuesday.

Miami-Dade County Mayor Daniella Levine Cava said that she and her staff will meet with engineering, construction and geology experts, among others, to review building safety issues and develop recommendations "to ensure a tragedy like this will never, ever happen again."

The cause remains unknown, but a letter sent months before the condo collapse warned owners that structural problems identified in a 2018 inspection had "gotten significantly worse." The letter from the condo board president also told owners they needed to pay a hefty price to get them fixed.

The 2018 engineering report had warned of "major structural damage" to the building.

State Attorney Katherine Fernandez Rundle said she will pursue a grand jury investigation to examine factors and decisions that led to the collapse.

Officials say prosecutors in Florida will pursue a grand jury investigation into the deadly collapse of an oceanfront condominium building.

Levine Cava also ordered a 30-day audit of whether such buildings under her jurisdiction are complying with the required recertification of structural integrity at 40 years. As part of the ongoing audit, a building in northeast Dade was told to close four balconies to residents due to safety conditions, she said.