She said 61 people are still unaccounted for.

"This is a staggering and heartbreaking number that affects all of us very deeply," Levine Cava said of Friday's new death toll.

A black cat named Binx, belonging to the Gonzalez family, was found alive in the rubble weeks after the Surfside condo collapse.

She was relieved to be able to share some good news during the evening news conference. A cat belonging to the Gonzalez family was found alive in the rubble. The family lived in unit 904 of the Champlain Towers South condominium with their black cat Binx.

Binx had been missing since the collapse but has now been reunited with its owners. Angela and Devin Gonzalez were seriously injured in the collapse, and Edgar Gonzalez is still missing," WSVN reported.

"I'm glad that this small miracle could bring some light into the eyes of a hurting family today and provide a bright spot for our whole community," Levine Cava said

Rescue crews, elected officials and members of the community came together to hold a moment of silence and prayer for the victims of the condo collapse in Surfside, Florida. So far 54 people have lost their lives in the tragedy.

Surfside crews had spent weeks coming through the Champlain Towers debris searching for survivors, but those rescue efforts turned into recovery efforts at midnight Wednesday. Authorities determined there was "no chance of life" in the rubble.

"When that happened, it took a little piece of the hearts of this community," said U.S. Rep. Debbie Wasserman Schultz, whose congressional district includes Surfside. 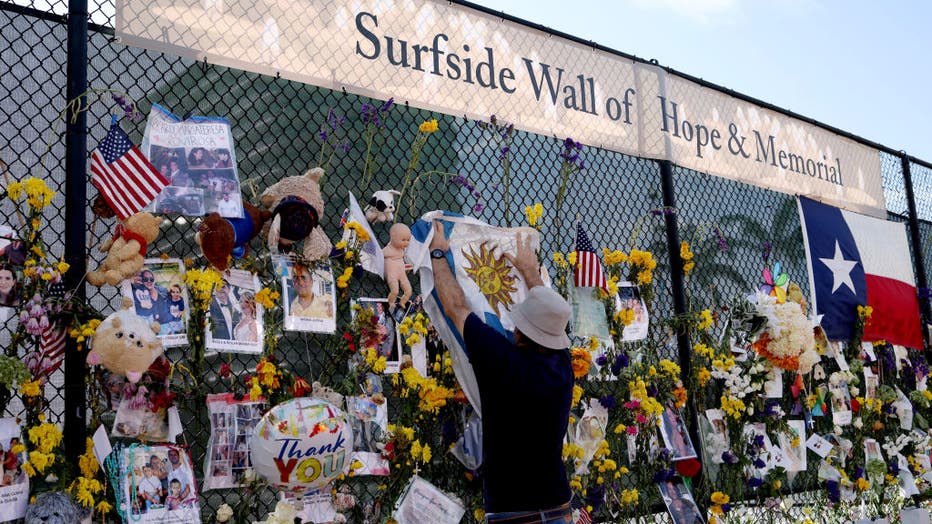 According to Surfside Mayor Charles Burkett, a fire official told the families of the victims that recovery crews will "will not stop working until they’ve gotten to the bottom of the pile and recovered every single of the families’ missing loved ones."

"This is exactly the message the families wanted to hear," Burkett said.

The collapse placed high-rise condominiums under intense scrutiny. Residents of Crestview Towers, which is roughly five miles from Champlain Towers, were ordered to evacuate the building last week after authorities deemed it unsafe for occupation.

City records show more than $500,000 in fines for illegal construction, 18 fire code violations and electrical issues. And an audit showed that Crestview Towers had been deemed unsafe in January.

So far, Crestview Towers is the only building to be evacuated since the Champlain Towers South collapse. Residents are getting a chance to return home Friday, but only briefly.

Police officers will escort residents inside Crestview Towers so they can retrieve necessary items. According to the Associated Press, they will only have 15 minutes to grab what they can.