SURFSIDE, Fla. - The death toll climbed to 64 people in a collapsed condo building in Florida Thursday as the painstaking search for survivors switched to a recovery effort, officials said.

10 additional victims were discovered in the rubble, officials said Thursday, bringing the death toll to 64 in the June 24 collapse of the Champlain Towers South building. Another 76 people were unaccounted for, although detectives were still working to verify that each of those listed as missing was actually in the building when it collapsed.

Rescuers had spent 15 days digging in the mound of concrete and twisted steel in Surfside, located just north of Miami Beach, searching in vain for any survivors. But the rescue turned into a recovery effort late Wednesday after authorities concluded there was "no chance of life" in the rubble.

Miami Dade Mayor Daniella Levine Cava said Thursday that crews were dedicated to the task of recovering as many victims as possible.

Detectives are still working to verify that each of those listed as missing was actually in the building when it collapsed. Meanwhile, rescue workers who have been at the site for two weeks are dedicated to the task of recovering as many victims as possible, Levine Cava said.

"The work continues with all speed and urgency," she said. "We are working around the clock to recover victims and to bring closure to the families as fast as we possibly can."

The Rev. Juan Sosa of St. Joseph Catholic Church met with other spiritual leaders at the collapse site, where heavy machinery picked through the rubble and mourners left flowers and photos.

"I’m hoping that they have some closure as we continue to pray for them," he said.

The change from search and rescue to recovery was somber. Hours before the transition Wednesday, rescue workers stood at solemn attention, and clergy members hugged a line of local officials while many of them sobbed. An accordion player unseen on a nearby tennis court played Aaron Copland’s "Fanfare for the Common Man," which was followed by a piccolo playing "The Battle Hymn of the Republic."

Michael Stratton, whose wife, Cassie, has not officially been confirmed dead, said friends and family had accepted "the loss of a bright and kind soul with an adventurous spirit." He was talking on the phone with his wife right when the building collapsed, and she described that it was shaking before the phone went dead, he has told Denver’s KDVR-TV.

"This wasn’t the miracle we prayed for, but it was not for lack of trying by rescue crews whose tireless bravery will never be forgotten," he said in a statement Thursday. 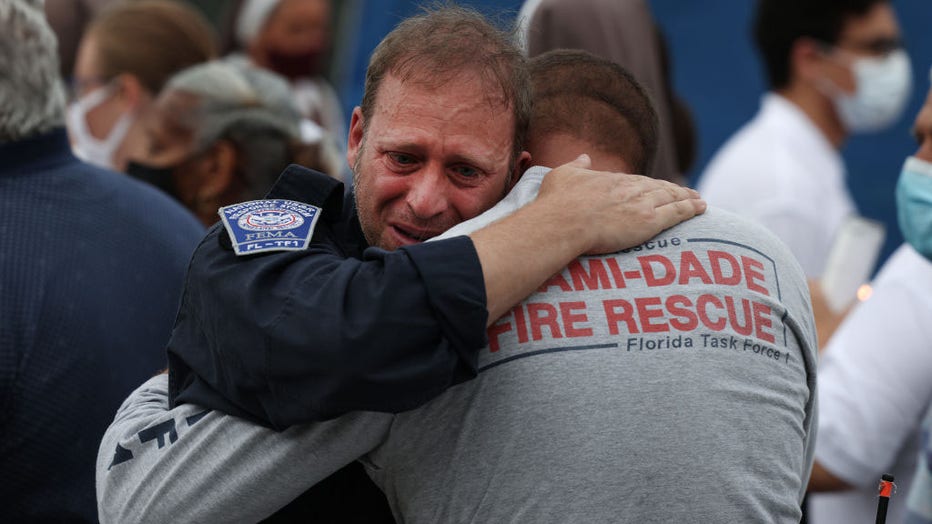 Rescue workers with the Miami Dade Fire Rescue embrace after a moment of silence near the memorial site for victims of the collapsed 12-story Champlain Towers South condo building on July 7, 2021, in Surfside, Florida. (Photo by Anna Moneymaker/Getty

U.S. Rep. Debbie Wasserman Schultz, whose congressional district includes Surfside, and Florida Gov. Ron DeSantis pledged financial assistance to families of the victims, as well as to residents of the building who survived but lost all their possessions. They also acknowledged the devastating toll the tragedy has taken on them over the past two weeks.

"Is there hope? Will we be able to have a miracle? I know it’s weighed a lot on the families," DeSantis said.

The unstable portion of the building that was still standing after the collapse was demolished on Sunday, allowing rescuers to access new areas of the scene and briefly rekindling the hope of finding survivors.

Teams found voids, mostly in the basement and the parking garage, but no survivors emerged. Instead, teams recovered more than a dozen additional victims. Because the building fell in the early morning hours, many were found dead in their beds.

No one has been pulled out alive since the first hours after the 12-story building fell.

Rescue crews, elected officials and members of the community came together to hold a moment of silence and prayer for the victims of the condo collapse in Surfside, Florida. So far 54 people have lost their lives in the tragedy.

The cause of the collapse of the Champlain, which was built in 1981, remains under investigation. Crews have removed 124 tons of debris from the site, which was being sorted and stored in a warehouse as potential evidence, officials said.

Authorities are launching a grand jury investigation into the collapse and at least six lawsuits have been filed by Champlain Towers families.