SURFSIDE, Fla. - President Joe Biden on Thursday offered sought to comfort those grieving and offered federal support for the ongoing search efforts at the site of a partially collapsed condo tower in Florida which left at least 18 people dead and dozens missing.

Biden, joined by first lady Jill Biden, thanked first responders and search and rescue teams, who have been combing through the mound of concrete and twisted steel in Surfside, located just north of Miami Beach. They also planned to meet with the families of victims.

The president, whose remarks were translated into Spanish, urged the families to "never give up hope," even as the search and rescue operation paused early due to structural concerns with the remaining portion of the building.

Addressing some of the families touched by the tragedy, Biden spoke in deeply personal terms as he offered his prayers and support in the private meeting.

"I just wish there was something I could do to ease the pain," he said in a video posted on Instagram by Jacqueline Patoka, a woman who was close to a couple and their daughter who are still missing.

Biden told the families that it can be "harder to grieve in public than it is in private, so I know there's an extra burden on you all."

Miami-Dade County Mayor Daniella Cava announced that rescue operations at the site of the condominium building collapse in Surfside, Florida, have been paused due to concerns over the structural integrity of the remaining building. This development comes as President Joe Biden arrives in the Miami Beach area to get an update on recovery efforts and meet with victims' families.

"But I promise you: I still believe in prayer," he said. "You’re in my prayers."

Attendees could be seen with tears in their eyes as Biden closed out his remarks, and he and wife, Jill, spent the next few hours visiting privately with the families.

"This is life and death," Biden said a briefing about the collapse. "We can do it, just the simple act of everyone doing what needs to be done makes a difference."

The president said he believed the federal government has "the power to pick up 100% of the cost" of the search and cleanup and urged the local officials to turn to Washington for assistance.

"You all know it, because a lot of you have been through it as well," Biden said. "There’s gonna be a lot of pain and anxiety and suffering and even the need for psychological help in the days and months that follow. And so, we’re not going anywhere."

Biden was briefed on the situation with Florida Gov. Ron DeSantis and Miami-Dade County Mayor Daniella Levine Cava. The mayor saluted the efforts to cross party lines in a time of "an unprecedented devastating disaster" and added that the unified government and community response "is what gives us hope." 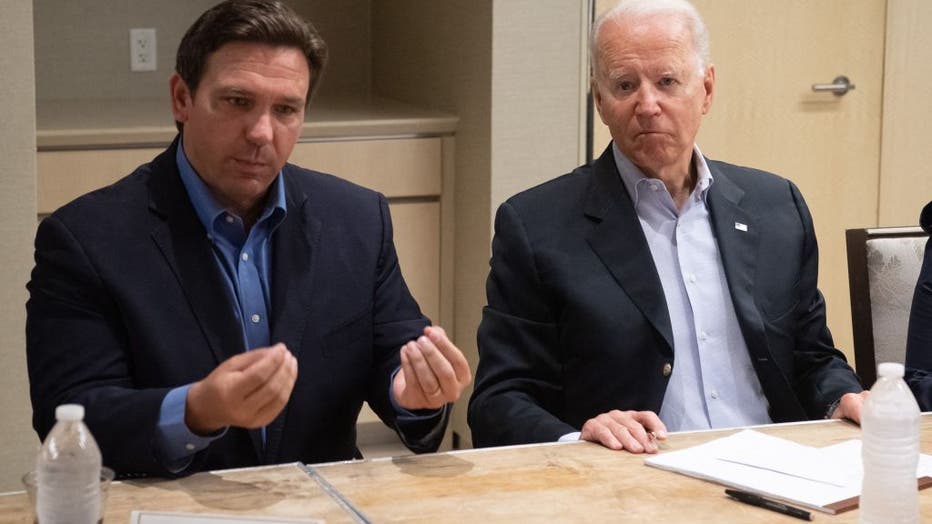 President Joe Biden alongside Florida Gov. Ron DeSantis (L) speaking about the collapse of the 12-story Champlain Towers South condo building in Surfside, during a briefing in Miami Beach, on July 1, 2021. (Photo by SAUL LOEB/AFP via Getty Images)

Earlier this week, Biden sent FEMA Administrator Deanne Criswell to the area for a tour of the site earlier with DeSantis.

DeSantis, a rumored Republican 2024 presidential candidate, said to Biden that the "cooperation has been great," declaring that the administration has "not only been supportive at the federal level, but we’ve had no bureaucracy."

As Biden pledged federal help, he touched DeSantis' hand to underscore the point.

"What you’re doing here is incredible, having to deal with the uncertainty," said Biden, as he offered profuse thanks to those who have been working at the site.

White House spokeswoman Karine Jean-Pierre said Biden aimed to "offer up comfort and show unity" with his visit to the site.

President Joe Biden spoke to search-and-rescue teams who have been working around the clock at the site of a deadly condo collapse in Surfside, Florida, in an effort to find any survivors, on July 1, 2021.

The White House emphasized that it was being careful to coordinate with officials on the ground to ensure that Biden’s visit didn't do anything to distract from the search and rescue effort. "They wanted us to come today," Jean-Pierre said.

Miami-Dade Police Director Freddy Ramirez said he hoped Biden’s visit could serve as a morale booster for the entire community.

"We’ve had several challenges from weather, sorrow, pain. And I think that the president coming will bring some unity here for our community, support, like our governor, our mayor, all of us together," Ramirez said.

Among the remains found Wednesday were those of a mother and her two daughters, ages 4 and 10, a loss that Cava called "too great to bear."

Miami-Dade police identified the children found Wednesday as 10-year-old Lucia Guara and 4-year-old Emma Guara, and their mother as 42-year-old Anaely Rodriguez. The remains of their father, Marcus Guara, 52, were pulled from the rubble Saturday and identified Monday.

Meanwhile, work at the rubble was halted early Thursday morning due to concerns about the stability of the section still standing at the 12-story Champlain Towers South, which came down around 1:30 a.m. on June 24. 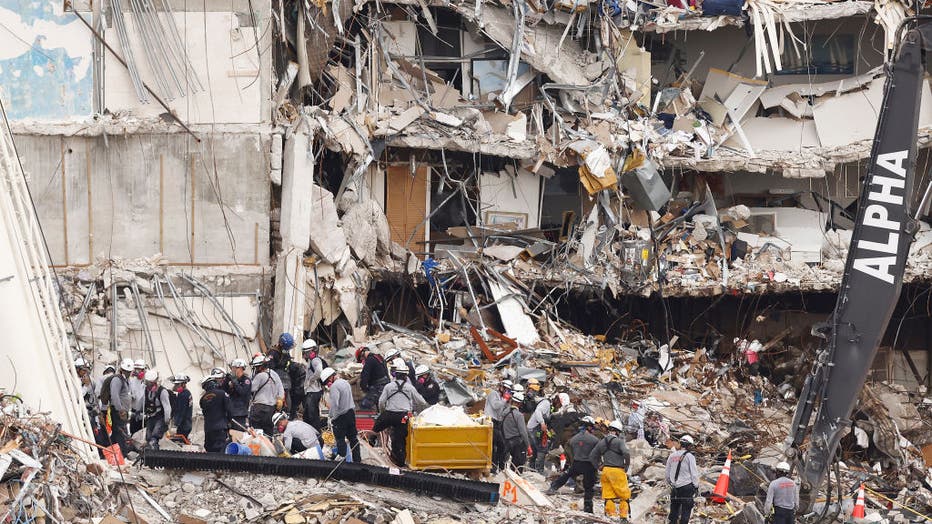 Search crews going through the rubble found the remains of six people on Wednesday, including those of two children, bringing the number of confirmed dead to 18. The number of residents unaccounted for stands at 145.

No one has been rescued since the first hours after the collapse. But still, hundreds of search-and-rescue personnel have been painstakingly searching the pancaked rubble for any potential signs of life.

The search and rescue teams, described as among the best and most experienced in the world, had continued the slow work of sifting through the pile for days. The collapse of the building left layer upon layer of intertwined debris, frustrating efforts to reach anyone who may have survived in a pocket of space.

Just two months before the building came down, the president of its board wrote a letter to residents saying that structural problems identified in the 2018 inspection had "gotten significantly worse" and that major repairs would cost at least $15.5 million. With bids for the work still pending, the building suddenly collapsed last Thursday.

State Attorney Katherine Fernandez Rundle said she will pursue a grand jury investigation to examine all factors and decisions that led to the collapse.