SURFSIDE, Fla. - The remains of 12 people have been recovered at the site of a partially collapsed condo building in Florida, while search and rescue teams continued to search urgently for dozens of people still missing.

She explained that the death toll remains fluid and could be updated at any moment.

The rescuers, described as among the best and most experienced in the world, continued the slow work of sifting through the pile — a deliberate and treacherous effort that has extended into a sixth day. A total of 149 people remained unaccounted for in the town of Surfside, located just north of Miami Beach. 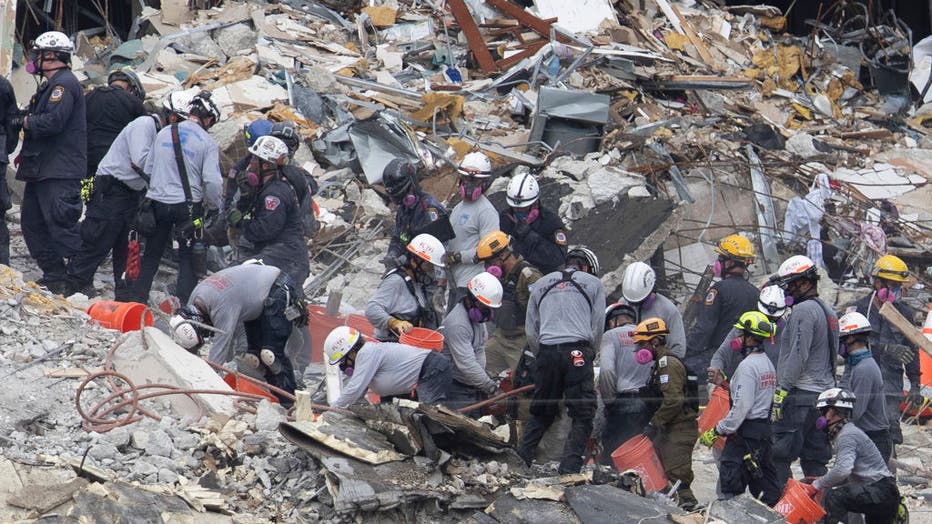 Just two additional bodies were found Monday, raising the count of confirmed dead to 11. The families of the 11 victims had all been notified, according to officials. The 12th fatality was confirmed Tuesday evening.

Crews from across Florida and from Mexico and Israel have descended on Surfside to join the effort. More than 400 rescue workers are at the scene, rotating in and out from the rubble every 45 minutes during 12-hour shifts. At any given time, six or seven squads — each with six members — tromp over the mountain of debris or tunnel into it.

At a previous press conference Tuesday morning, Levine Cava said those working at the mound of concrete, twisted steel and remnants of households are doing "painstaking, grueling work."

"They live to save lives and that is what we are witnessing," she told reporters. "They’re bravery under extreme circumstances, continuing and continuing."

A wing of the 12-story Champlain Towers came down around 1:30 a.m. on June 24. Authorities said their efforts were still a search-and-rescue operation, but no one has been found alive since hours after the collapse.

Still, families of the missing have waited as teams search, desperate for progress and news. Officials have been meeting regularly with loved ones to explain what they’re doing in the search and answer questions.

They have discussed with families everything from how DNA matches are made to help identify the dead, to how will next of kin be contacted, to going into "extreme detail" about how they are searching the mound, the mayor said.

Armed with that knowledge, Levine Cava said families are coming to their own conclusions.

"Some are feeling more hopeful, some less hopeful, because we do not have definitive answers. We give them the facts. We take them to the site," she said. "They have seen the operation. They understand now how it works, and they are preparing themselves for news, one way or the other."

The pancake collapse of the building left layer upon layer of intertwined debris, frustrating efforts to reach anyone who may have survived in a pocket of space.

"Every time there’s an action, there’s a reaction," Miami-Dade Assistant Fire Chief Raide Jadallah said Monday. "It’s not an issue of we could just attach a couple of cords to a concrete boulder and lift it and call it a day." Some of the concrete pieces are smaller, the size of basketballs or baseballs. 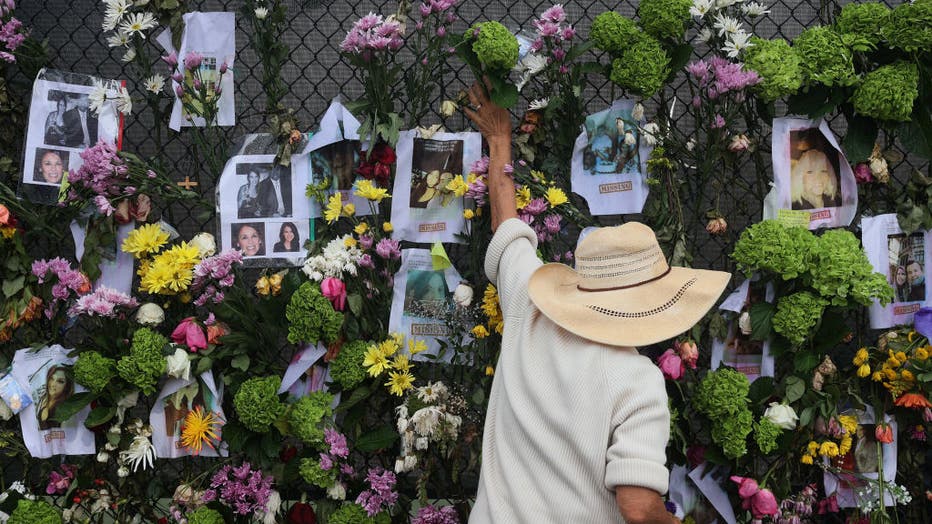 A person adds flowers to a memorial that has pictures of some of the missing from the partially collapsed 12-story Champlain Towers South condo building on June 28, 2021, in Surfside, Florida. (Photo by Joe Raedle/Getty Images)

Among the tools rescuers used was a microwave radar device developed by NASA’s Jet Propulsion Lab and the Department of Homeland Security that "sees" through up to 8 inches of solid concrete, according to Adrian Garulay, CEO of Spec Ops Group, which sells them.

Surfside Mayor Charles Burkett on Monday shared about a tragic meeting with a young girl, about "11 or 12 years old," at the collapse site on Sunday night that "really brought it home to me." Burkett said one of her parents was in the building at the time of the collapse.

"She was sitting in a chair by herself with nobody around her, looking at her phone," Burkett told reporters. "She was reading a Jewish prayer to herself, sitting at the site by where one of her parents presumably is."

"And she wasn’t crying. She was just lost. She didn’t know what to do, what to say, who to talk to," he continued. "We’re going to do the best we can to bring out that parent."

Officials in the Miami Beach area are searching for dozens of people who are unaccounted for after a condominium building collapsed in Surfside, Florida. A nearby surveillance camera captured the devastation, which has left at least one person dead and 10 injured. The cause of the collapse has not been determined.

Personal belongings were evidence of shattered lives amid the wreckage of the Champlain, which was built in 1981. Many were moved by a children's bunk bed perched precariously on a top floor, bent but intact and apparently inches from falling into the rubble.

"Somebody was probably sleeping in it," Jimmy Patronis, the state’s fire marshal, told reporters on Friday. "There’s all those what-ifs."

Authorities insisted they are not losing hope.

Deciding to transition from search-and-rescue work to a recovery operation is agonizing, said Dr. Joseph A. Barbera, a professor at George Washington University. That decision is fraught with considerations, he said, that only those on the ground can make.

Barbera coauthored a study examining disasters where some people survived under rubble for prolonged periods of time. He has also advised teams on where to look for potential survivors and when to conclude "that the probability of continued survival is very, very small."

"It’s an incredibly difficult decision, and I’ve never had to make that decision," Barbera said.

The building collapsed just days before a deadline for condo owners to start making steep payments toward more than $9 million in repairs that had been recommended nearly three years earlier. A 2018 engineering report warned of "major structural damage" to the Champlain Towers South building.

The report did not warn of imminent danger from the damage, and it still remained unclear if any of the damage observed was responsible for the collapse.

Prosecutors in Florida plan to pursue a grand jury investigation into the deadly collapse. Levine Cava said at the Tuesday news conference that she fully supports such an investigation.

The collapse has also drawn attention to older high-rise buildings throughout South Florida and prompted Levine Cava to order a 30-day audit of whether such buildings under her jurisdiction are complying with the required recertification of structural integrity at 40 years.

Levine Cava on Tuesday noted that as part of the ongoing audit, a building in northeast Dade was told to close four balconies to residents due to safety conditions.