HOUSTON (AP) — Harvey's floodwaters started dropping across much of the Houston area and the sun came out Wednesday in a glimmer of hope for the stricken city, even as the storm doubled back toward land and pounded communities farther east, near the Texas-Louisiana line.

The scope of the devastation caused by the hurricane came into sharper focus, meanwhile, and the murky green floodwaters from the record-breaking, 4-foot deluge of rain began yielding up bodies as predicted.

The confirmed death toll climbed to 31, including six family members — four of them children — whose bodies were pulled Wednesday from a van that had been swept off a Houston bridge into a bayou. 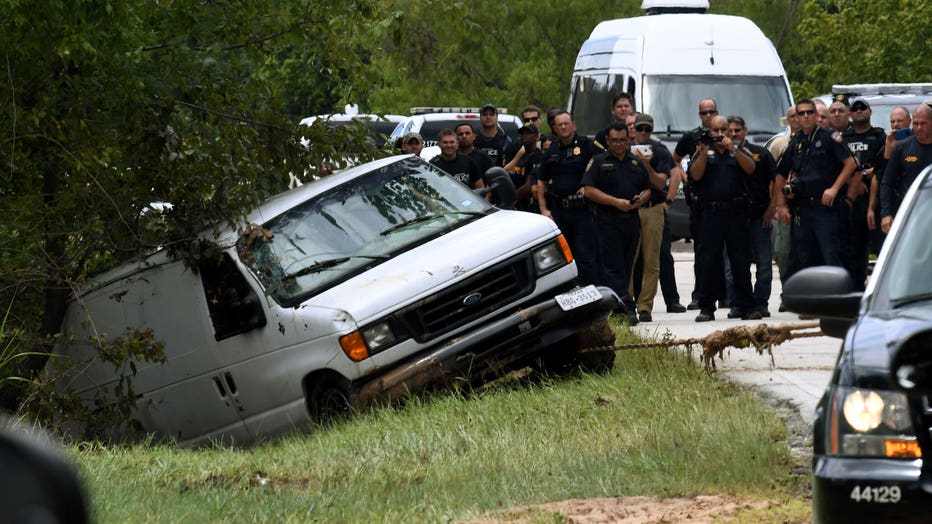 Police investigators watch as the van containing the six members of the the Saldivar family who died is towed to the road after they crashed their van into Greens Bayou as they tried to flee Hurricane Harvey during heavy flooding in Houston, Texas on

Authorities are investigating more deaths to determine whether they were storm-related.

"Unfortunately, it seems that our worst thoughts are being realized," Harris County Sheriff Ed Gonzalez said after the van that disappeared over the weekend was found in 10 feet of muddy water.

While conditions in the nation's fourth-largest city appeared to improve, authorities warned that the crisis in Houston and across the region is far from over. The storm, in fact, took a turn for the worse east of the city, close to the Louisiana line.

Beaumont and Port Arthur, Texas, struggled with rising floodwaters and worked to evacuate residents after Harvey completed a U-turn in the Gulf of Mexico and rolled ashore early Wednesday for the second time in six days. It hit southwestern Louisiana as a tropical storm with heavy rain and winds of 45 mph.

Forecasters predicted that a wobbling and weakening Harvey will be downgraded to a tropical depression late Wednesday or early Thursday and completely dissipate within three to four days.

But it still has lots of rain and potential damage to spread, with 4 to 8 inches forecast from the Louisiana-Texas line into Tennessee and Kentucky through Friday. Some spots may get as much as a foot, raising the risk of more flooding.

For much of the Houston area, forecasters said the rain is pretty much over.

"We have good news," said Jeff Lindner, a meteorologist with the Harris County Flood Control District. "The water levels are going down."

Houston Mayor Sylvester Turner said the city's two major airports would be up and running again in the afternoon.

At Hermann Park, south of downtown, children glided by in strollers and wagons, joggers took in midday runs and couples walked beside cascading fountains and beneath a sparkling sun. People pulled into drive-thru restaurants and emerged from a store with groceries.

At the same time, many thousands of Houston-area homes are under water and could stay that way for days or weeks. And Lindner cautioned that homes near at least one swollen bayou could still get flooded.

Officials said 911 centers in the Houston area are getting more than 1,000 calls an hour from people seeking help.

In Houston's flooded Meyerland neighborhood, hundreds of families emptied their homes of sodden possessions under a baking sun as the temperature climbed into the 90s. They piled up couches, soggy drywall and carpets ripped out of foul-smelling homes where the floodwaters had lingered for more than 24 hours.

The curbs were lined with the pickup trucks of cleanup contractors and friends.

For Harry Duffey, a 48-year-old computer security specialist, this was flood No. 3 in as many years. Just before the flood, he got a notice that his flood insurance premium had nearly doubled to $5,300 a year.

"Everywhere we look this water has cost me money after money after money. It just does not end," he said. But he said he has no intention of moving: "This is in my blood. This is where I'm from."

Altogether, more than 1,000 homes in Texas were destroyed and close to 50,000 damaged, and over 32,000 people were in shelters across the state, emergency officials reported. About 10,000 more National Guard troops are being deployed to Texas, bringing the total to 24,000, Gov. Greg Abbot said.

"This is going to be an incredibly large disaster," Brock Long, chief of the Federal Emergency Management Agency, said in Washington. "We're not going to know the true cost for years to come. ... But it's going to be huge."

Confirmed deaths from the storm include a married couple who drowned after their pickup truck was swept away while they were on the phone with a 911 dispatcher asking for help, officials said.

Others among the dead include a woman whose body was discovered floating in Beaumont, a man who tried to swim across a flooded road, and a woman who died after she and her young daughter were swept into a drainage canal in Beaumont. The child was rescued clinging to her dead mother, authorities said.

A top county official says Tropical Depression Harvey took two lives in Orange, Texas. Orange County Judge Stephen Carlton would only say the two died Monday night in the city of Orange and that the deaths were storm related. He provided no other details.

When Harvey paid its return visit to land overnight, it hit near Cameron, Louisiana, about 45 miles from Port Arthur.

Port Arthur found itself increasingly isolated as floodwaters swamped most major roads out of the city and spilled into a storm shelter with about 100 people inside. Motiva Enterprises closed its Port Arthur refinery, the largest in the nation, because of flooding.

Port Arthur Mayor Derrick Freeman posted on his Facebook page: "city is underwater right now but we are coming!" He urged residents to move to higher ground and avoid getting trapped in attics.

More than 500 people — along with dozens of dogs, cats, a lizard and a monkey — took shelter at the Max Bowl bowling alley in Port Arthur after firefighters popped the lock in the middle of the night, said the establishment's general manager, Jeff Tolliver.

"The monkey was a little surprising, but we're trying to help," he said.

In Orange, Texas, about 30 miles east of Beaumont, residents of a retirement home surrounded by thigh-deep water were rescued by National Guardsmen and wildlife officers, who carried them from the second floor and put them aboard an airboat.

Harvey initially came ashore as a Category 4 hurricane in Texas on Friday, then went back out to sea and lingered off the coast as a tropical storm for days, inundating flood-prone Houston.

Harvey's five straight days of rain totaled close to 52 inches, the heaviest tropical downpour ever recorded in the continental U.S.