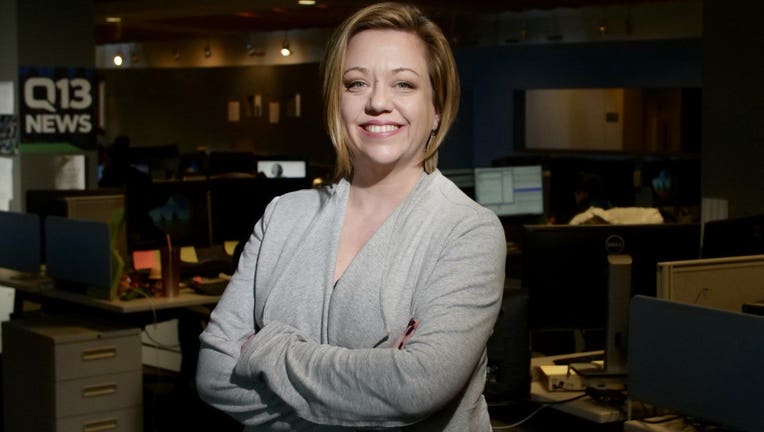 SEATTLE -- In 2003, Erica Hill was working the night shift as an assignment editor at Q13 News. It was her job to answer calls that came into the newsroom, listen to police scanners, and send crews out to breaking news.

People who worked with her then, some of whom are still at Q13 today, saw the beginnings of a truly special career.

“Right off the bat I knew that she was not just any assignment editor,” said Erika Wutherich, who in 2004, due to pregnancy complications, moved from her position as a photographer to the assignment desk.

Hill was assigned to train her.

“She wasn't happy unless she had at least three phone calls going,” Wutherich recalled of Hill, “usually one on hold and two different phones to her ears – the phone cord literally stretching from the desk to a rack of video controls where she dialed in and recorded live feeds while also letting producers know exactly what was going on.”

Wutherich was overwhelmed. The job looked miserable. And stressful. She told Hill as much – and got an unexpected response.

“I am not happy unless my hair is on fire and there are at least three breakers going on at the same time,” Hill told her.

It was then that Wutherich realized what many at Q13 would come to know – Hill had the makings of a great leader.

Fifteen years later, Erica Hill will depart Q13 this week after serving as our news director since 2013. On December 9 she will start in her new role as news director for KTTV in Los Angeles.

Her decision is a personal one – one that puts family first, and we couldn’t be more thrilled for her.

At the same time, it’s hard not to be a little selfish.

There are few bosses who are as universally beloved as ours. It’s a difficult balance to earn both the respect and friendship of the people who work for you, something she has achieved over years of proven leadership.

As she departs, we wanted to reflect on the lessons our boss taught us about what makes a good leader – lessons we hope you will find useful as well.

A good boss has your back – as long as you’re acting in good faith.

We joke in our newsroom about Erica Hill’s signature phrase: “It’s going to be great!” We can laugh about it now, but it often came at some of our lowest and most stressful points. It was a phrase that sometimes came at the end of tough conversations – but it signaled that the hard part was behind us.

“She just wants to make sure that everyone knows that we’re going to be okay,” said Tessa LaVergne, a former producer at Q13. “With all the ups and the downs, she’s just kind of been that rock for us.”

When I made my first big mistake as a reporter, I was devastated. I had incorrectly attributed a curse word to a respected reverend when it was actually the person next to her who said it. The backlash was immediate – and it came in like a tsunami.

I knew the mistake reflected poorly on our company. When my boss called, I braced for the worst.

But instead of adding to the criticism, she reassured me that everything would be fine, that it would pass, and that she would help me deal with the blow-back. She offered to give me a day off to regroup.

Honest mistakes happen. But a good leader will have your back to face what comes next.

Good leaders want to make your job easier – with one caveat

Q13 General Manager Pam Pearson, the person who hired Erica Hill to lead our newsroom, said she was not only focused on what was happening below her, but above her as well.

It was not uncommon for Erica to ask her boss how she could make her job easier.

The same was true in the newsroom. Having come up through the ranks, Erica had an intimate knowledge of the challenges her employees were dealing with day-to-day. She wanted to make sure that everyone – from the very top to entry-level hires – was set up to achieve.

But often, that meant letting them make judgments for themselves.

“As a manager or as an employee, we often go to our bosses for solutions, but that’s not always what’s best for us in the end,” said Steve Fedoriska, Q13’s chief photographer. “What we need is for someone to help us find the solution, to push us toward the answers we seek without providing us those answers.  Short-term this is frustrating, but long-term we are better for the experience.”

Good leaders want to make your job easier – but not at the expense of helping you grow into a better leader yourself.

Good leaders try to put your well-being before their business

A good boss knows that life comes first. Every day in every workplace in America, someone is struggling in silence with burdens others cannot imagine: addiction, loss, divorce, abuse, depression.

Good leaders foster an environment where employees feel comfortable confiding in them, and good leaders will help you take steps toward feeling whole.

When my dad passed away earlier this year, Erica encouraged me to drop everything. She didn’t inform me how many days of leave I would be able to take or ask how long I’d be gone.

More than that, she knew how I could be. It’s always been hard for me to let work go undone, and she gave me the reassurance she knew I needed to drop everything and walk away.

“Please take time to focus on you and your family,” she wrote me in a message. “Don’t worry about work and let me know when you’re ready to return – no pressure. I’m so sorry.”

“I’ve had numerous issues with my family and she just says, ‘Go! Go take care of that situation,’” he said.

When our anchor Travis Mayfield’s dad, a Bremerton police officer, was injured in the line of duty in 2017, Erica had a to strike a difficult balance. On one hand, the shooting was a big news story. On the other, her employee was hurting. To make matters more complicated, a deadly train derailment the following day meant all hands of deck. Erica needed her employees at work – Travis, too. But while it was the best thing for the business, it would never have occurred to her to suggest it.

“Erica never once asked me to consider returning from my time off early,” Mayfield said. “Instead, she supported my family’s need for me to be away while we tended to my dad.”

Good leaders know that life comes first, even when it competes with your company’s needs. Signaling to your employees that their well-being is a priority is one of the quickest ways to earn their respect.

Good leaders value you – and not just with words

Words of support a go a long way toward making sure employees feel respected and valued. But ultimately, it isn’t the only thing that keeps good workers around.

Of course, we all have our own idea of what we’re “worth” to our employers. What you think you’re worth to a company might be dramatically different than what the marketplace dictates you get paid.

Good bosses don’t lowball you. But they also know the limit of what they can realistically pay you for your job. When you’ve reached that point, a good boss will tell you straight up. From there, you can work together to make informed decisions about your future. Are there opportunities to promote? Can your boss offer more benefits in lieu of a raise? Is it time to move on?

Negotiating for pay should not be treated like a game of winners or losers – where one side leaves feeling defeated or disrespected. A good leader won’t tear you down to avoid paying you more, but will instead suggest ways you can work toward your goals.

Let’s be honest, employees won’t respect you unless they’re just a little scared of you. But that fear shouldn’t come from a bad place.

When you’re a good leader, employees are simply scared of letting you down.

The email I dreaded most from Erica had no text in the body, just a subject line that read “come see me.” Lord knows I got a few of those over years. I’d get up from my desk, take a deep breath, and go to her office to face the music. Because here’s the thing – if I got one of those emails, I knew that I deserved whatever talking to I had coming.

A good boss embodies the saying “tough, but fair.” They don’t let things slide, but they also don’t make problems bigger than they need to be. Most importantly, a good leader is willing to leave the bad stuff in the past and chart a positive path forward.

Finally, a message to Erica Hill’s new team: You just hit the jackpot. Those of us in this business know how valuable a truly great leader can be. Take every opportunity to learn from her example. Oh – and make sure she wears sunscreen. It’s very cloudy here.