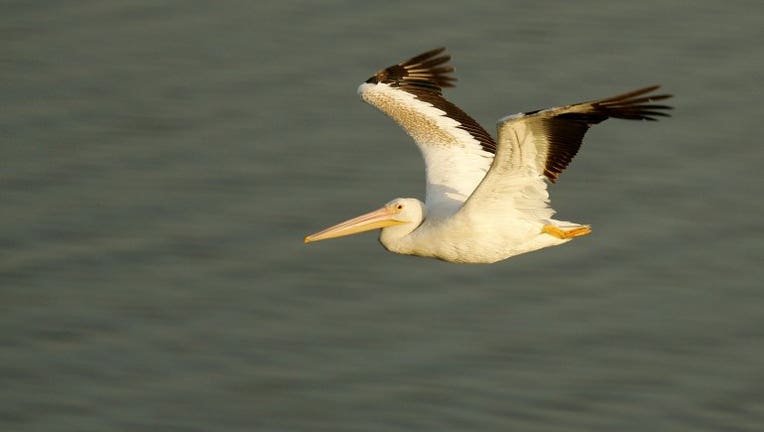 An American white pelican flies over the Sonny Bono Salton Sea National Wildlife Refuge, a major stop for birds on the Pacific Flyway, on June 23, 2006 near Calipatria, California.

TEXAS -- Fishermen and pelicans on the Texas Gulf Coast have been angling at the same spot lately, and somebody is getting hurt awfully ugly: the pelicans.

So many have impaled themselves on fishhooks, that for wildlife activist Sharon Schmalz it's a record. "I've been here 30 years and never seen this many in such a short time."

The birds have been punctured by multiple hooks. "Every one had two to four to five hooks in them," she said.

Wildlife veterinarians in Houston have extracted the barbs out of eyes, bills, midsections and untangled fishing line from 38 birds in the last three days. And five more are on their way to treatment at the Wildlife Center of Texas.

"There are going to be some we have to do surgery on. It's pretty intense; it's a lot like a MASH unit," Schmalz said.

And there are many more birds flailing near Galveston's Pier 14, Schmalz said.

Wildlife officials and police are investigating to find out why so many of them are impaling themselves on so many hooks.

For one, their numbers on land are on a seasonal rise. When winter sets in, hunger drives young birds ashore. "It's colder and hard to find food," Schmalz says.

They also gravitate toward fishing boats in search of an easy meal: caught fish and fishing bait.

But the gouging spate is not the norm. Winters are usually slow for the center's medical unit, where seven veterinarians work, but the fishhooks have them busy around the clock, the center said on its Facebook page.

Wildlife educators are working to inform fishermen about the problem.

Many of the pelicans are already weakened before getting stabbed by the hooks; they are emaciated and have parasites. Many are unable to eat for extended periods and are dehydrated