A woman kept an aggressive coyote at bay with a stick for about 10 minutes.

PROVINCETOWN, Mass - A pair of fishermen rescued a woman from a Massachusetts beach after she kept an aggressive coyote at bay with a stick for 10 minutes on July 29, according to local media.

Marcy Sterlis was on Race Point Beach in Provincetown, Massachusetts when she saw the coyote just before noon.

"I sat down to put my sneakers back on and as I was getting up, I look over and this coyote was four or five feet from me," Sterlis told Boston 25.

Just offshore, Captain William Kelley and fisherman Andrew DeCarton heard Sterlis crying "help me" and "he won’t leave me alone" as the animal circled her in the footage recorded by DeCarton.

The coyote circled Sterlis for about 10 minutes, unresponsive to her yells and swinging stick.

DeCarton used binoculars to see the incident from afar as the boat approached the beach’s shore. 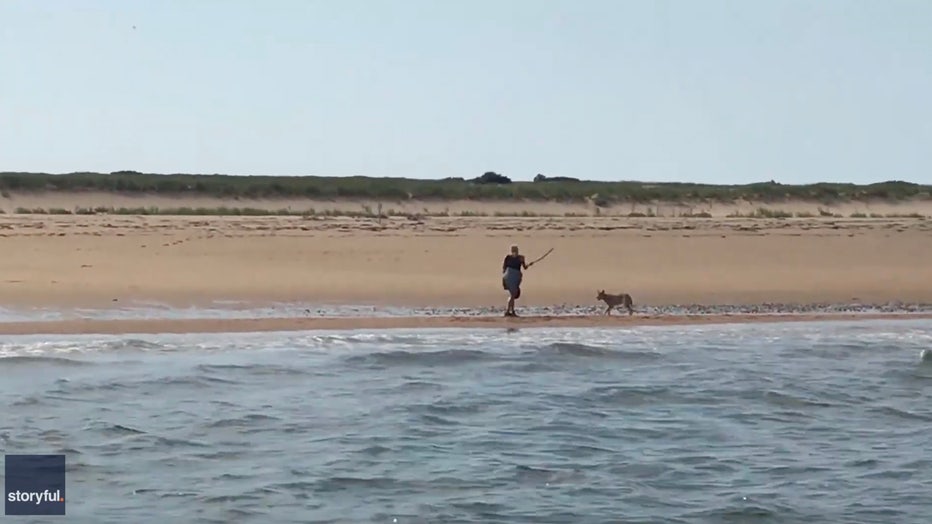 The coyote circled Marcy Sterlis for about 10 minutes, unresponsive to her yells and swinging stick.

As the fishermen neared the shore, Kelley used a paddle to hit the side of the boat to make a loud noise and scare the coyote away. He also shouted to Sterlis, asking if the coyote bit her.

DeCarton said the "coyote was scared off by the sound of a paddle being hit against the boat," before Sterlis was brought aboard to safety.

The fishermen took Sterlis back to her car safely, according to the local news station.

She later posted about the incident on Facebook, saying, "Major props to these guys for hearing my screams and responding – this coyote was relentless, and I don’t know what I would have done without them."

The coyote didn’t scare Sterlis, a New York native, away from Cape Cod’s gorgeous beaches. She told Boston 25 that she went to Meadow Beach after the incident.