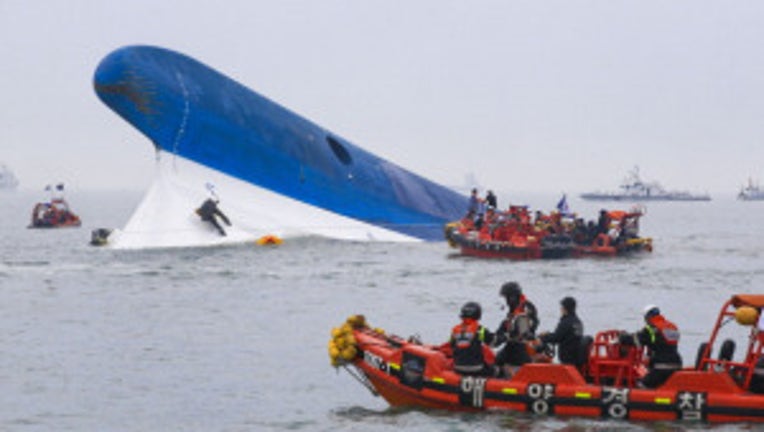 Jindo, South Korea (CNN) -- Fisherman Kim Hyun-ho finds no peace when he lies down at night. The hundreds of dead or missing passengers from the Sewol ferry disaster haunt his sleep.

Their screams ring in his head. He has vivid memories of his rush to save them in his modest fishing boat off South Korea's coast 10 days ago.

Kim thinks he may have pulled 25 people from the frigid waters of the Yellow Sea, said Saturday. But the man from a nearby tiny island of just 100 people feels no pride, only torment.

"It was hell. Agonizing. There were a lot of people and not enough boats, people in the water yelling for help. The ferry was sinking fast," he said.

He watched people trapped inside go under with the vessel yards in front of him. Then he heard on television how many people were sealed up in the ship.

The father of two grown children is heartbroken for the hundreds of parents who have lost theirs, those he could not save.

He's trying to fish again, but he's a changed man, he says.

Divers recovering bodies from inside the upended ferry, inundated with murky water, got a brief reprieve Saturday from the horrors they've seen in its dark, cavernous entrails.

On Friday, they found the bodies of 48 girls -- wearing their life jackets -- pressed into a room too small for so many people.

Divers believe that they will face the same scene again. There may be a second, similar room, where 50 more girls are believed to have been trapped when the ferry rolled over.

South Korean Coast Guard diver Kim Dong-soo said he had tears in his eyes when he heard about the accident.

"Even now, I'm searching as if I'm looking for my own children -- and other Coast Guards feel the same way," he told CNN. "I have two medical patches on me, have difficulty breathing and my head hurts. But it hurts the most in my heart, knowing those children are still in the cold water."

When they plunge into the water again later Saturday, five U.S. Navy rescue specialists will assist their search in a supporting role from outside the search zone.

The divers will face a search that is getting harder and slower.

There may be fewer bodies to retrieve, but divers have already searched the easily accessible places, said South Korean navy Capt. Kim Jin-hwang, commander of the rescue operation.

"But the navy will not stop until the last body is found," he said.

Now they will head down deep for cabins near the seabed.

In the cramped spaces, divers have been battling a forest of floating objects and doors forced shut by enormous water pressure. Currents tug at the breathing tubes that keep them alive as they look for the dead.

Civilian diver Chun Kwan-geung, one of the many rescuers working in the murky waters, spoke of breaking out windows to get to the lower decks of the ship, which now lies on its right side on the seafloor some 240 feet below the surface.

As the effort inside the ship continues, South Korean authorities are pressing a criminal investigation into the sinking.

It's resulted in the arrests of the ship's captain and 14 other members. Prosecutors in Mokpo, South Korea, who are leading the ferry investigation tell CNN that all the 15 crew members in charge of sailing and the engine room have been indicted and are being held in the Mokpo Prison.

Yang Joong-Jin, the senior prosecutor for the investigation task force, said they all face charges of "causing death by abandoning (ship), and violation of the country's marine law, the Rescue and Aid at Sea and in the River Act.

Investigators also searched the company that owned the ferry and the home of the man whose family controls it, and conducted a wide-ranging probe into the country's marine industry.

Prosecutors have said that authorities have yet to determine what caused the sinking.

Leading theories include changes made to increase the ferry's passenger capacity and shifting cargo.

On Friday, investigators checked out the Sewol's sister ship, the Ohamana, and said they found 40 of its life rafts weren't working, emergency slides to help evacuate passengers were inoperable, and equipment to tie down cars and cargo either was nonexistent or didn't work very well.

Like the Sewol, the Ohamana had been modified to add more passengers, the prosecutor's office said.

Investigators are looking into whether those modifications could have contributed to the Sewol's fate.

Kim Yong-rok, an opposition lawmaker who represents Jindo, an island near where the ship sank, told CNN that modifications to add 117 more passenger cabins to the ship raised the ferry's center of gravity.

On Friday, the South Korean Ministry of Oceans and Fisheries announced it would ask lawmakers to consider legislation prohibiting modifications to ships to increase passenger capacity