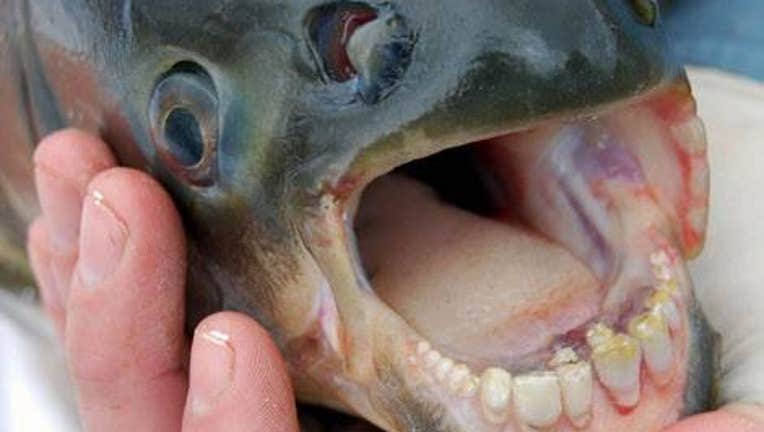 The red-bellied pacu has human-like teeth suited for the nuts and seeds of the Amazon. (Wikipedia)

Although some may find the teeth disconcerting, they are not the mutant result of some genetic experiment, just a fish called the red-bellied pacu, far from its native South American waters.

"The red-bellied pacu, Piaractus brachypomus, is a popular aquarium fish imported from South America," according to the Michigan Department of Natural Resources. "The U.S. leads the world in importing ornamental fish, supporting a worldwide aquarium industry that tops $1 billion annually."

The pacus' "human-like teeth" are used for eating nuts and seeds, according to the Michigan DNR. The powerful jaws, broad teeth and taste for tree nuts are likely behind the pacu's mythical reputation as the 'testicle-eating fish.'

The DNR confirms that two pacus have been pulled from Lake St. Clair and one from the Port Huron area in July alone.

The fish can grow aggressively, and officials think pet owners, believing they are doing the right thing, may have set them free.

“Pet release is almost never humane. Pets released from confined, artificial environments are poorly equipped to fend off predators and may be unable to successfully forage for food or find shelter,” said Nick Popoff, manager of the DNR's Aquatic Species and Regulatory Affairs Unit. “Those that do succeed in the wild can spread exotic diseases to native animals. In the worst-case scenario, released animals can thrive and reproduce, upsetting natural ecosystems to the degree that these former pets become invasive species.”

The pacu isn't considered an invasive species in Michigan because they aren't expected to survive the harsh winters.

Pet owners who can no longer care for their fish are asked to donate them to an environmental learning center, aquarium or zoo.  Giving the fish to another person or trying to return it to the pet store are also options.