Washington Department of Fish and Wildlife said it is the first time that vertebrae have been found ashore with debris from the 2011 Japanese tsunami. 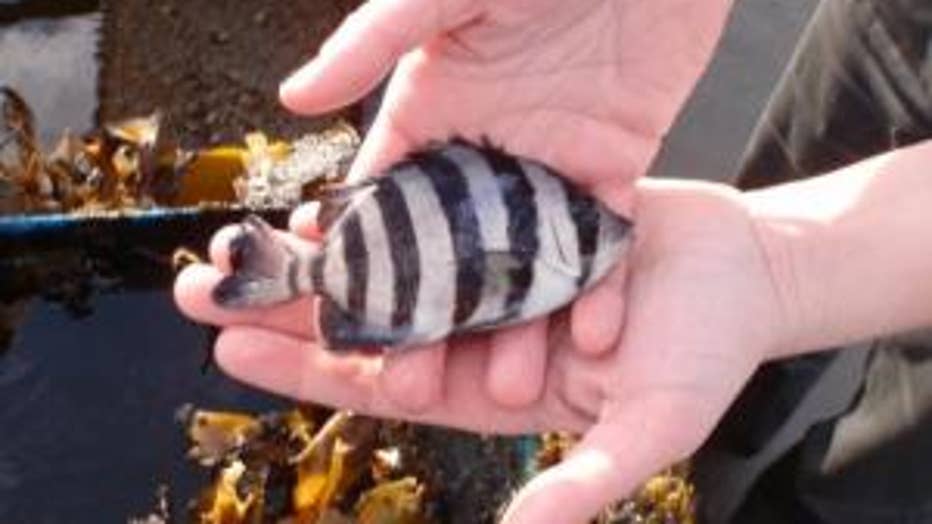 One of the knifejaw or striped beak fish native to Japan that was found in tsunami wreckage on the Washington Coast March 22. (Photo: Washington Dept. of Fish and Wildlife

Five of the fish, commonly called a knifejaw or striped beakfish, were found on board the wreckage  of the boat that washed ashore in Washington March 22.

The fish are native to warmer waters near Japan, China and the Korean Peninsula.

The five stowaways, roughly the size of your palm, lived in a cozy spot at the back of the boat.

A 20- to 30-gallon containment hold in the boat's stern lost its cover, and that part of the boat was submerged as the vessel drifted in the ocean, said Allen Pleus, a scientist with the Washington Department of Fish and Wildlife. That "created like a cave they could go in and out of," Pleus said.

Pleus said most debris out in the ocean attracts fish, so it's not surprising these fish found a home in the debris. But it is surprising they survived the nearly 5,000-mile journey.

"It's very rare that you'd see something like this," Pleus said. "Obviously, fish are very robust and we are learning this on all of the species that come across."

When researchers first explored the boat, they saw just one of the fish in the holding tank. They collected it in a bucket and took it to Long Beach City Hall.

Someone at City Hall called the Seaside Aquarium in Seaside, Ore., to come and get it. Fish and Wildlife personnel found three more in the tank's murky water. Finally the boat was towed to a state yard, where the fifth fish came swimming up to Pleus.

The one that went to the aquarium will live out its life there. General Manager Keith Chandler says it'll go on display Saturday.

"He is a pretty cool fish, and I just wonder if there are more out there," he said.

The other four had the honor of contributing to research at Oregon State University, where researchers will dissect them, learn their ages and what they've been eating.

Sea anemones, scallops, crabs, worms and sea cucumbers that hitched a ride on the same boat also will be studied.

The surviving beakfish has been dubbed the "Tsunami Fish" and will be on display starting Saturday at the Seaside Aquarium.