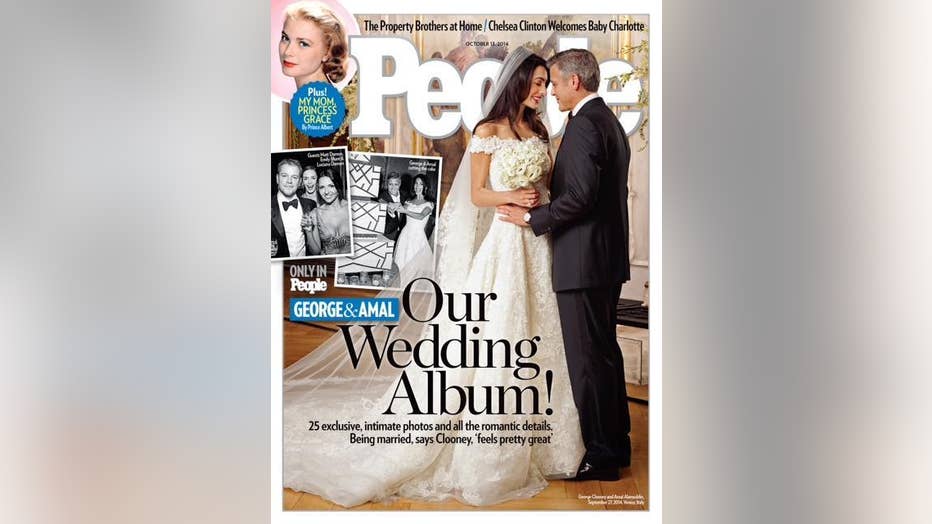 (CNN) -- It may have taken him awhile, but it looks like waiting to get married was more than worth it for George Clooney.

The couple are featured in their wedding finery on the cover of People magazine in an issue that hits newsstands Friday. The magazine features 25 exclusive images from the ceremony, which was one of Hollywood's most anticipated events.

The bride wore a custom Oscar de la Renta gown that featured French lace, hand-embroidered pearls and diamanté accents, an off-the-shoulder neckline and a full circular train. The groom was dressed in a Giorgio Armani tuxedo with a white shirt, black bow tie and customized cuff links from his bride, with his name inscribed in Arabic.

About 100 guests, including stars such as Bono and Matt Damon, attended the ceremony. The bride's mother told People, "George and Amal radiated love all night."

"The wedding was so unbelievably special, it was legendary," said Alamuddin's mother, Baria. "These three days -- the friends, the families, the atmosphere, everything -- will stay with me all the rest of my life."

It appears the couple, who share a passion for travel and humanitarianism, couldn't be happier.