SEATTLE -- Firefighters are still on watch 24 hours after a huge blaze in the International District. That fire caused so much damage the structure could come crumbling down.

An entire block of King Street is still closed. Officials worry the fire and all the water they dumped on it Tuesday has weakened the fragile infrastructure.

Even Christmas morning couldn’t keep the crowds away from building on the 660 block of King Street. People had to stop and see the damage for themselves. 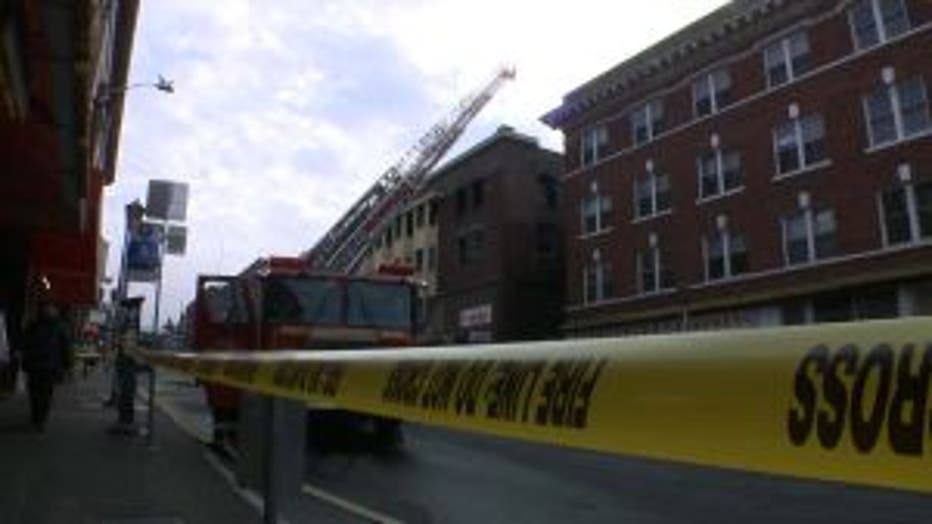 Around 4pm on Christmas Eve ladder trucks pumped water into the building from above.

“We had to go defensive and with that situation it took quite a while to get the fire out,” said Lt. Sue Stangl with the Seattle Fire Department. “They did a great job and the fire is out. The reason we know that is because we have thermal imaging cameras in place that’s allowing us to detect if there’s any increase in the heat.

Around a half-dozen businesses were operating on the street level, but the remaining upper floors have been condemned for years.

Years of neglect, and yesterday’s fire, are why officials are keeping the block on King Street closed.

“Our concern is the over all structure of the building. We do not want to have any catastrophic collapses,” said Stangl.

Bricks have been falling off the building since last night and the owners of those cars haven’t been able to move them until today.

The fire forced nearly 50 people out of nearby homes last night but now that power has been restored everyone can go back to their homes.

The building was the site of Washington State’s worst mass killing. The infamous Wah Mee massacre happened back in the 1980’s. But the family who owns the property says the building is more than it’s dark past.

“It defines Chinatown,” said Timothy Woo. “The bakery, the restaurants, the bulletin board is on the wall. This is a historical building not just because of the Wah Mee club.”

Fire officials don’t yet know what caused the blaze and they can’t start their investigation until they get some structural engineers to shore up the walls.

City officials hope to get that work started on Thursday.