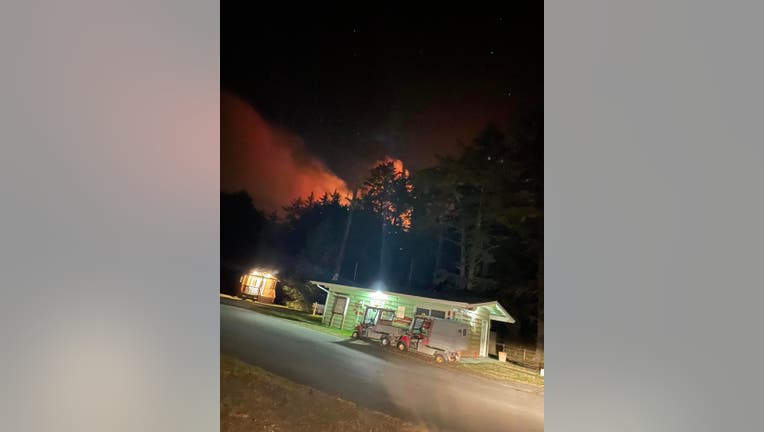 NEAH BAY, Wash. - A wildfire at the far northwestern tip of the Olympic Peninsula prompted more than 100 people to evacuate neighborhoods in Neah Bay on Thursday, and nearby schools have closed.

The fire is burning on the remote Makah Indian reservation near Hobuck Lake, Makah Tribal Chairman T.J. Greene confirmed to FOX 13 News. He said residents reported the blaze to emergency dispatchers in the morning when embers began falling near the lake. Greene said the cause was not known.

Evacuation was recommended for area residents and the Makah Community Gym was opened as a shelter. Greene said no one has been injured.

"We made it through the day without injury, loss of life or property damage. One fire is 50% contained the other is 60% contained," Greene told FOX 13.

The Cape Flattery Trail and the Hobuck Campground were closed. Greene said campers were evacuated.

The state Department of Natural Resources said the Hobuck Fire is made up of three active wildland fires: Hobuck Lake, The Cape and Johnny’s Junction.

"It fully engulfed the hillside. The flames could be seen for miles," Greene said.

The state Department of Natural Resources has about 60 personnel on-site plus two helicopters for water drops, although winds Thursday had kept them grounded, Greene said.

Wildfire fighting strategy: Why some fires are left to burn, and what it means for air quality

Air quality has improved in Puget Sound, but air quality alerts remain in play as wildfires around the state continue to spew smoke into the air.