PHNOM PENH, Cambodia - A massive fire at a Cambodian hotel casino Thursday injured over 60 people and killed at least 19 — a number that officials warned would rise after the search for bodies resumes Friday.

The blaze, which started around midnight Wednesday, was put out over 12 hours later at 2 p.m. Thursday, said Sek Sokhom, head of Banteay Meanchey province’s information department. He said more than 60 people were injured and the death toll was expected to rise once rescuers are able to access victims who were believed to still be under debris or in locked rooms.

Videos posted on social media showed people falling from a roof after they were trapped by the fire at the Grand Diamond City casino and hotel in the town of Poipet.

In a video posted by Cambodia’s firefighting agency, a crowd could be heard shouting pleas to rescue people trapped on the roof of the hotel complex, which is more than a dozen stories tall at its highest point. The video showed at least one person falling as the flames reached the roof. 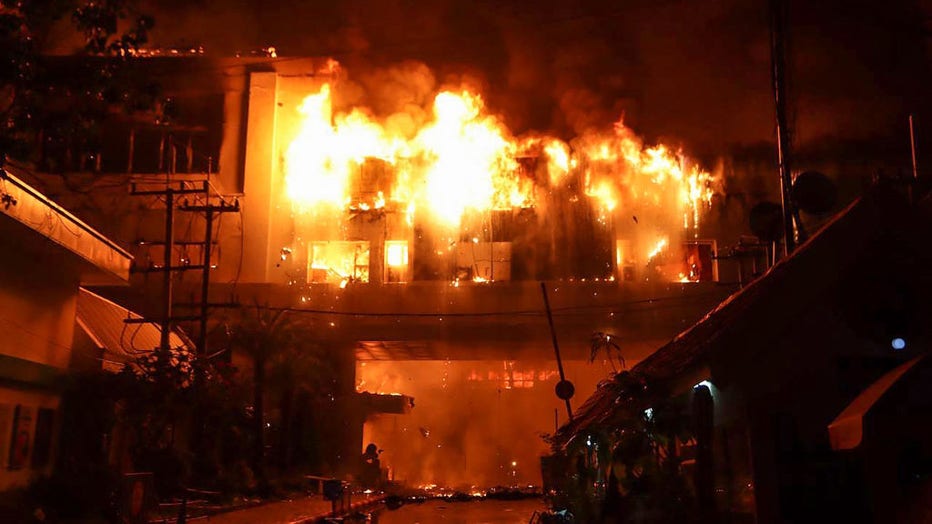 A major fire burns through the Grand Diamond City hotel-casino in Poipet on Dec. 29, 2022. (Photo by AFP) (Photo by STR/AFP via Getty Images)

The Department of Fire Prevention, Extinguishing and Rescue said it heard calls for help at 4 a.m. emanating from rooms on the 13th, 14th and 15th floors. Hands and even a mobile phone's flashlight were seen waving from windows inside the complex.

"The fire was massive, and was inside the casino, so it was difficult for our water cannons to reach it," said a firefighter in the video posted online by the fire department.

Many of those inside, both customers and staff, were from neighboring Thailand, which sent firetrucks and emergency workers Thursday to help cope with the crisis in the bustling border town.

An initial investigation found that the fire may have been caused New Year’s holiday decorations drawing too much electricity, causing wires to overheat and burn, Sek Sokhom said. The dead and injured comprised people of several nationalities, including Thai, Chinese, Malaysian, Vietnamese and Cambodian, he said.

A local Buddhist temple was being used to receive their bodies. 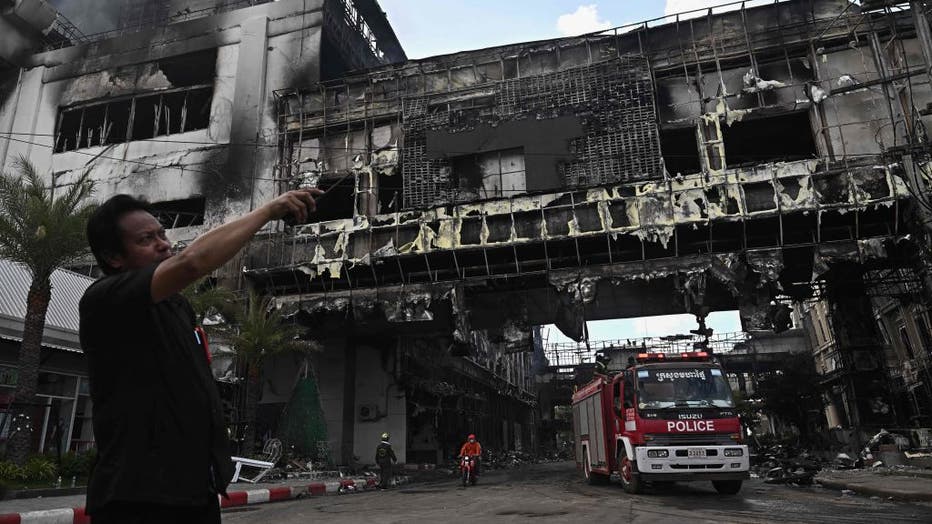 A man points next to a destroyed part of the Grand Diamond City hotel-casino following a major fire in Poipet on Dec. 29, 2022. (Photo by LILLIAN SUWANRUMPHA/AFP via Getty Images)

The Grand Diamond City casino complex has 500 employees, and had 1,000 customers Wednesday, according to a report from Soth Kimkolmony, a spokesperson for Cambodia’s National Committee for Disaster Management. It was unclear how many were present when the fire broke out.

"Right now, we are trying to bring the dead bodies from the building down. I don’t think there will be any survivors because of very thick smoke. Even we all (the rescue staff) have to wear proper gear when we go inside the building, otherwise we cannot breathe at all," said Montri Khaosa-ard, a staff member of Thailand Ruamkatanyu Foundation, a social welfare organization that sends volunteers to disaster scenes.

Thai and Cambodian rescue teams worked side by side in Thursday's search of the premises, but paused efforts their searched efforts at the dangerously damaged site as night fell.

Thailand’s public television network, Thai PBS, reported that 50 Thais, both staff and customers, had been trapped inside the casino complex. It cited reports that the emergency ward in Aranyaprathet Hospital on the Thai side of the border was full and some victims had to be sent to other hospitals.

Poipet in western Cambodia is a site of busy cross-border trade and tourism opposite the city of Aranyaprathet in more affluent Thailand.

Casinos are illegal in Thailand. Many Thais visit neighboring countries such as Cambodia — a popular tourist destination with convenient international connections — to gamble. Poipet has a cluster of more than a dozen casinos.

The Grand Diamond City casino is just a short walk from the border checkpoint with Thailand and popular with customers who make the four-hour drive from the Thai capital, Bangkok.