Murray’s resignation will go into effect Wednesday afternoon, at which time City Council President Bruce Harrell will take over in the interim.

“I am announcing my resignation as mayor, effective at 5 p.m. tomorrow," Murray said in a statement Tuesday. "While the allegations against me are not true, it is important that my personal issues do not affect the ability of our City government to conduct the public’s business."

Ed Murray announces he will resign as Seattle mayor

Ed Murray announces he will resign as Seattle mayor

Harrell has five days to decide whether he wants to complete the term, which technically ends on New Year's Eve, although the city has raised the possibility that the winner of the Nov. 7 mayoral election could take office on Nov. 28 when the vote results are certified by King County Elections. 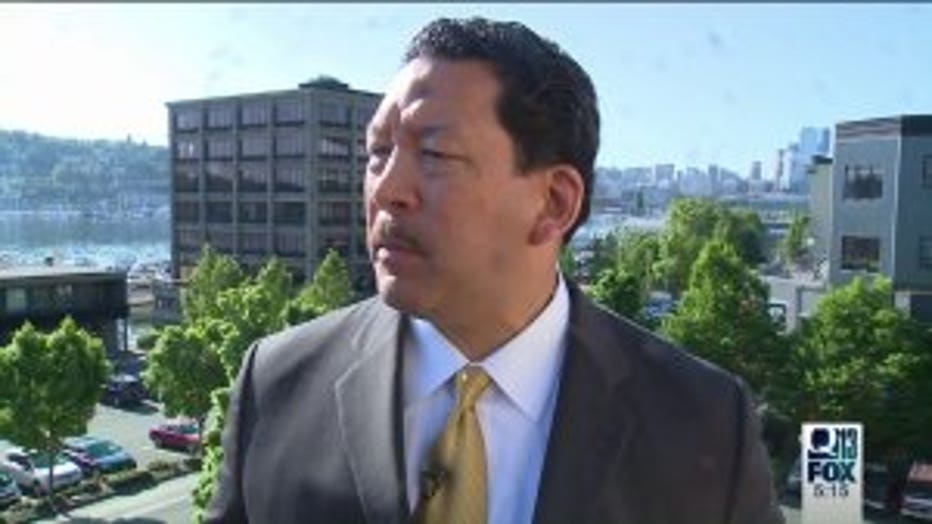 “First and foremost, my heart goes out to survivors and their families who have been affected by sexual abuse and the re-traumatization these allegations have caused," Harrell wrote. "These accusations are unspeakable and require the utmost attention from our legal and social service system no matter how long ago they might have occurred.

“The City must focus on governance and day-to-day business without distraction. I have a plan in place for a seamless transition in order for City operations to continue at the highest standard. Seattleites deserve a government that holds their full confidence and trust."

Mayor Murray talks about his legacy

Mayor Murray talks about his legacy

Murray’s cousin, 54-year-old Joseph Dyer, told the Seattle Times on Tuesday morning that Murray had repeatedly abused him when they shared a bedroom at Dyer’s mother’s house beginning when Dyer was 13. Dyer is the fifth man to accuse Murray of sexual abuse.

Born in Aberdeen and a graduate of Lacey’s Timberline High School, Murray climbed through the political ranks after he was appointed to fill a vacant state House seat in 1995.

Before being elected mayor in 2013, Murray, 62, was a long-time state lawmaker who led the campaign to legalize same-sex marriage in Washington state. As mayor he pushed to raise the city's minimum hourly wage to $15.

Murray grew up in working class neighborhoods in and around Seattle as one of seven children in an Irish Catholic family and became one of the state's most prominent political figures.

As a young man, he considered joining the priesthood and spent a year at a seminary in 1976 before studying sociology at the University of Portland, a private Catholic institution.

Murray ended up working as a paralegal with public defender lawyers in Portland before returning to Seattle and joining the vanguard of the gay rights movement in the 1980s, serving as campaign manager for Cal Anderson, a Seattle state senator who was the state's first openly gay member.

Murray, now 62, succeeded Mike McGinn as Mayor in 2014 and was expected to run for re-election this year, but an April lawsuit claiming he raped and molested a teenager in 1986 touched off a domino effect of allegations. One previous allegation, from a former foster child, led to the state of Oregon finding Murray had likely abused the boy and prohibiting him from fostering more children.

Murray announced in May that he wouldn’t be running for re-election, but continued to maintain that he intended to serve out his term.

But Tuesday’s allegations, first reported by the Seattle Times, proved to be the final straw.

“But it has also become clear to me that in light of the latest news reports it is best for the city if I step aside," Murray said in his statement. “To the people of this special city and to my dedicated staff, I am sorry for this painful situation."

The Times reported that Dyer said he was 13 years old when Murray began forcing him into sex.

The Times reported that Murray denied these allegations as well, saying he did live with the family during that time period but didn’t abuse Dyer.

He spoke of longstanding problems with Dyer’s side of the family, and accused them of seeing him “down and out, and they want to finish me off.”

Former U.S. Attorney Jenny Durkan, who is vying to succeed him, called for Murray to step down and removed his endorsement from her campaign website after announcing he would resign. Her rival, urban planner Cary Moon, reiterated her own call for Murray's resignation, which she first made months ago.

"Mayor Murray is doing the right thing by stepping down," Gov. Jay Inslee said in a statement. "He has done good things for Seattle and his resignation will allow the city to move forward."

Harrell will become mayor upon Murray's resignation and has five days to decide whether to fill out the remainder of his term. If he declines, the council would appoint someone else, possibly Councilman Tim Burgess, who is retiring this year.

Speaking to Q13 News on Tuesday afternoon, Burgess said, “Mayor made the right decision. I think the accumulation of these accusations are too much to bear and it’s time to move on.”

Another City Council member, Kshama Sawant, said ithat she and Lorena Gonzalez are the only two on the City Council who called for Murray's resignation before Tuesday. She said the other seven members failed to act appropriately and show leadership.


After President Trump was elected last fall, Murray became a frequent critic. He announced that Seattle was suing over Trump's executive order that threatens to withhold federal funds from communities that refuse to cooperate with efforts to find and deport immigrants in the country illegally.

“I am announcing my resignation as mayor, effective at 5 p.m. tomorrow.

“While the allegations against me are not true, it is important that my personal issues do not affect the ability of our City government to conduct the public’s business.

“I’m proud of all that I have accomplished over my 19 years in the Legislature, where I was able to pass what were at the time the largest transportation packages in state history, a landmark gay civil rights bill and a historic marriage equality bill.

“And I am proud of what we have accomplished together at the City during my time as mayor, passing a nation-leading $15 minimum wage, and major progressive housing affordability and police accountability legislation, as well as negotiating an agreement to build a world-class arena that I believe in time will bring the NHL and NBA to Seattle.

“But it has also become clear to me that in light of the latest news reports it is best for the city if I step aside.

“To the people of this special city and to my dedicated staff, I am sorry for this painful situation.

“In the interest of an orderly transition of power, Council President Bruce Harrell will become Mayor upon my resignation, and will decide within the following five days whether he will fill out the remainder of my term. During this time Director of Operations Fred Podesta has been tasked with leading the transition.”