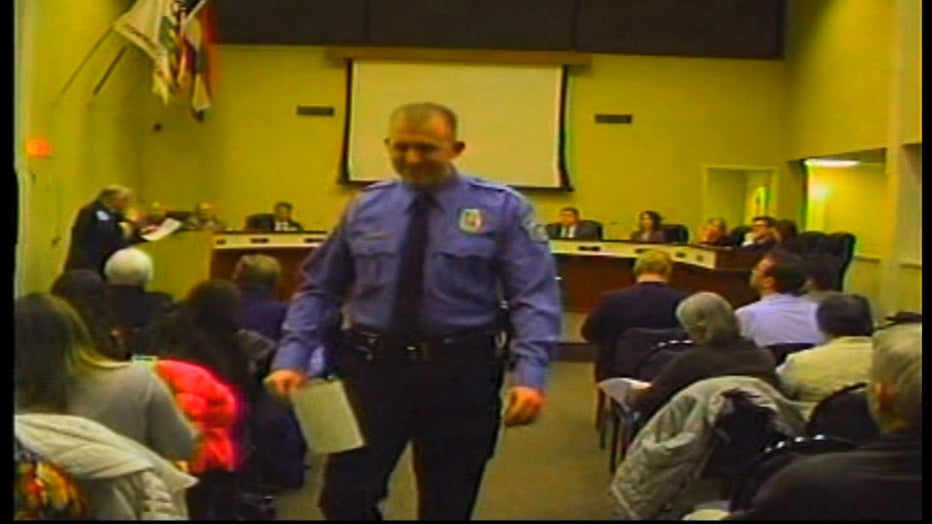 In this February 11, 2014 image from video released by the City of Ferguson, Missouri, officer Darren Wilson attends a city council meeting. Wilson is the officer who shot and killed Michael Brown on August 9, 2014. (Photo: City of Ferguson)

FERGUSON, Missouri (CNN) -- As a grand jury gets closer to announcing its decision, Ferguson Police Officer Darren Wilson, who fatally shot Michael Brown, is in the final stages of negotiations with city officials to resign, sources close to the talks said.

The grand jury hearing evidence is preparing to meet Friday for what might be its final session. A decision on whether to charge Wilson in the death of the unarmed teen could come the same day, law enforcement officials have said.

Wilson maintains he has done nothing wrong, and the resignation talks have hinged on whether a grand jury returns an indictment against him in Brown's death, the sources said.

While Wilson has told associates he would resign to help ease pressure and protect his fellow officers, he's expressed concern about resigning while the grand jury was hearing evidence for fear it would appear he was admitting fault.

Wilson could announce as soon as Friday his plans to resign, the same day a St. Louis County grand jury meets to deliberate and possibly decide on an indictment.

The talks could still collapse, the sources close to the talks said.

Wilson doesn't know what the grand jury will do and if they return charges he could change his mind.

Wilson shot Brown on August 9. The shooting sparked days of violent protests in Ferguson as residents demanded his arrest.

The officer, who has six years on the force with no disciplinary issues on his record, is on paid administrative leave. If he returns to duty, he will have to undergo two psychological evaluations, authorities have said.

If a grand jury decision comes Friday, prosecutors are expected to provide law enforcement with 48 hours notice before making a public announcement, possibly on Sunday.

The current plans could still change and prosecutors could shift the planned grand jury session.

Ferguson became a flashpoint for racial tension after the teen's shooting; Brown, 18, was black, while Wilson is white.

Some predict that will be the case again when the grand jury's decision is announced.

Missouri Gov. Jay Nixon declared a state of emergency as a precaution in the event of unrest or violence.

Along West Florissant Avenue, the ground zero of violent protests, businesses put back the plywood boards they had taken down from their windows and doors.

"We've had three months to prepare. ... Acts of violence will not be tolerated," he said. "Our intelligence is good. Our tactics are good. We can protect lawful people and at the same time arrest criminals."

Brown's shooting on August 9 also touched a national nerve, with protests decrying racism and police brutality taking place around the country since his death.

The Ferguson National Response Network expects that reaction to the grand jury ruling will not be limited to the St. Louis area. It has set up a Tumblr account advertising about 70 "planned responses" to the ruling. They will take place from West Palm Beach, Florida, to New York, Chicago and Los Angeles.

Brown's supporters have turned out in force, but Wilson's supporters have demonstrated on occasion as well. They point to witness testimony and leaked grand jury documents that suggest Brown might have attacked Wilson, struggled for his gun and perhaps even charged the officer after the tussle over the weapon.