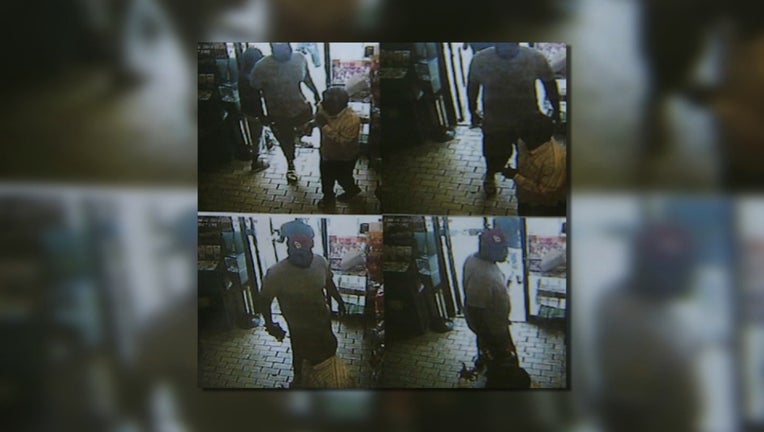 This imagery, released by the Furgeson, Missouri Police Department Friday, August 15, 2014, depicts an alleged strong-arm robbery at a convenience store. Ferguson police allege the man in these images is Michael Brown, the teen later shot and killed


FERGUSON, Missouri (CNN) -- The Ferguson police officer who shot Michael Brown didn't stop him because he was suspected in a recent robbery, but because he was "walking down the middle of the street blocking traffic," the city's police chief said Friday.

Ferguson Police Chief Thomas Jackson told reporters the alleged "robbery does not relate to the initial contact between the officer and Michael Brown."

So why did Ferguson police decide to release surveillance video of the alleged convenience store Friday -- the same day that they named, six days after the shooting, the white police officer who fatally shot the African-American teenager -- if the two incidents are not related?

Jackson said he released the videotape "because the press asked for it," noting some in the media had filed Freedom of Information requests for the footage and that he couldn't withhold indefinitely. The chief added "we needed to release that at the same time we needed to release the name of the officer involved in the shooting," though he didn't elaborate more on why.

The flurry of information added more intrigue to a case that has spurred protests in Ferguson among those angry at the shooting of the 18-year-old Brown, and what they decry as a heavy-handed response by police afterward.

Earlier Friday, authorities had released documents identifying Brown as the "primary suspect" in the robbery of a convenience store that happened moments before he was killed.

The documents claim Brown roughly handled a clerk trying to stop him before walking out of the store with the box of Swisher Sweets. Police also released surveillance video showing a man pushing aside a smaller one who seemingly tried to stop the larger man, who then departed the store.

The claim immediately was met with skepticism among Brown's family and some in the community, who have accused Ferguson police of attempting a cover-up to protect the officer.

"Michael Brown's family is beyond outraged at the devious way the police chief has chosen to disseminate" incomplete information about what happened, family attorney Benjamin Crump said in a statement.

Police, he said, were acting "in a manner intended to assassinate the character of their son, following such a brutal assassination of his person in broad daylight."

On Twitter, many community members and activists expressed disappointment and outrage.

"How can they not release info on the shooting but link #MikeBrown to robbery. Shame on them," @NafisMWhite tweeted.

Another said that Brown being a suspect should not have led to the use of deadly force.

"When police approached Mike Brown, he was still a suspect, he wasn't guilty of anything, so it shouldn't have come to a shooting," one man told CNN's Don Lemon on Thursday.

A key complaint of protesters has been that witnesses say the officer shot Brown as the teenager stood with his hands in the air. Police have said the shooting occurred during a struggle for the officer's gun.

Officer Darren Wilson -- a six-year police veteran, including four years with Ferguson -- was named Friday as the officer who fired the fatal shots. Wilson was in the area around the time of the convenience store robbery, even if he did not try to stop Brown specifically because of that alleged robbery, Jackson said.

The release of Wilson's name satisfied a key demand of protesters and critics of the handling of the case by the suburban St. Louis police department and St. Louis County investigators handling the probe.

But, especially in light of the robbery allegations, the release of Wilson's name is unlikely to quell protests in the city and elsewhere over the death of an unarmed African-American man at the hands of a police officer.

Missouri State Highway Patrol Capt. Ron Johnson, who took over protest security at Gov. Jay Nixon's direction after days of sometimes violent clashes between police and protesters, said he expected calm to prevail when protesters begin to filter back into the city Friday night.

"In our anger, we need to make sure we don't burn down our own house," he said.

Witnesses have told CNN that the officer and Brown did tussle at the cruiser window, but it didn't look like Brown was trying to get at the officer.

"It looked as if Michael was pushing off and the cop was trying to pull him in," Tiffany Mitchell told CNN on Wednesday night.

Neither Mitchell nor co-worker Piaget Crenshaw say they saw Brown enter the vehicle.

Instead, a shot went off, then the teen broke free, and the officer got out of the vehicle in pursuit, the women said.

"I saw the police chase him ... down the street and shoot him down," Crenshaw said. Brown ran about 20 feet.

Another man, Dorian Johnson, said that he was with Brown at the time of the shooting and that police shot him without provocation.

"We wasn't committing any crime, bringing no harm to nobody, but my friend was murdered in cold blood," he told CNN affiliate KMOV.

The documents released Friday name him as the second suspect in the convenience store robbery, but Jackson said Friday that he will not face any charges.

"We have determined that he committed no crime," Jackson said.

Not everyone accepted claims of Brown's involvement in a robbery, and some took to social media to question details of the evidence presented by police.

Pointing to images posted online of Brown's body lying in the street, some people said that the body didn't appear to be as heavyset as the man in the surveillance video and that he seemed to be dressed differently, too.

Nixon, addressing reporters, said "New facts are out ... but those are not the full picture."

"I think the focal point here remains to figure out how and why Michael Brown was killed and to get justice as appropriate in that situation," he said.

Protests over Brown's killing were peaceful Thursday night after several days of tense encounters between protesters and police.

"Last night was a great night, a great night," Ron Johnson, the Missouri State Highway Patrol captain, said Friday. There were no arrests, he said.

He promised to do his part to keep the calm, using his now signature smile and hugs for protesters.

Nixon and President Barack Obama also have called for peace from all sides and respect for the rights of protesters and the press. Police briefly detained two reporters Wednesday and Al Jazeera America said police fired tear gas and rubber bullets at their camera position.

"There is never an excuse for violence against police or for those who would use this tragedy as a cover for vandalism or looting," Obama said Thursday. "There is also no excuse for police to use excessive force against peaceful protests or to throw protesters in jail for lawfully exercising their First Amendment rights."

They told the crowd to disperse and arrested a few people.