A 20-year-old Seattle man is facing a terrorism-related charge after being arrested while trying to board a flight to join the Islamic State group.

SEATTLE - A 20-year-old Seattle man is facing a terrorism-related charge after being arrested while trying to board a flight to join the Islamic State group, the U.S. Justice Department said Tuesday.

Elvin Hunter Bgorn Williams was arrested Friday at Seattle-Tacoma International Airport as he checked in for a flight to Cairo, according to a criminal complaint unsealed Tuesday in U.S. District Court in Seattle.

The complaint said members of a Seattle-area mosque who had been trying to de-radicalize Williams were the ones who tipped off the FBI that he continued to espouse violence and extremism.

Williams was due to make an initial appearance in court later Tuesday on a charge of providing material support to a terrorist organization. Court records did not immediately identify an attorney who might speak on his behalf.

The complaint described Williams as "self-radicalized" and said he first came to the FBI’s attention when he was 16. That’s when administrators at his high school reported that he was telling others he wanted to join ISIS and that the fatal terrorist attack on an Ariana Grande concert in England was justified by the way the singer dressed.

At the time, his mother told the FBI that Williams had been kicked off social media for his pro-ISIS posts and that she cut off the internet service at their home to keep him from accessing extremist websites, the complaint said.

Last November, a member of the mosque, which is not identified in court papers, contacted the agency to report concerns about Williams, FBI special agent David Narrance wrote in the complaint. As an act of charity, the mosque had been looking after him in an attempt to de-radicalize him — helping give him a place to live, food and tuition for a semester of college.

Members of the mosque also gave him a cellphone and a laptop in hope the items would help him find a job, the complaint said. But they also made clear he would have to abandon ISIS if he wanted help.

A member of the mosque subsequently saw Williams using the phone to watch ISIS-related videos and to engage in extremist online chats, and demanded the phone back, Narrance wrote. Members of the mosque reviewed the phone and were disturbed by what they found: graphically violent videos, including beheadings by ISIS militants and bomb-making instructions.

The FBI opened an investigation and enlisted the help of several confidential informants, including some who messaged with Williams about his plans and others who posed as ISIS recruiters. In messages cited in the complaint, Williams discussed his willingness to become a martyr, his preference for fighting in the desert over the jungle, and his fervent wish to behead someone.

He spent much of this year working and saving up for travel expenses, the complaint said. He received his passport on May 6. 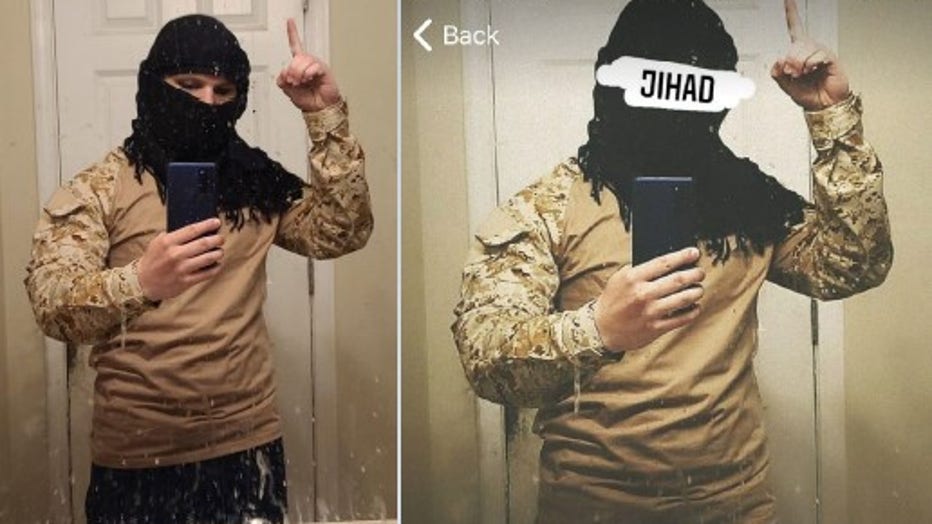 According to the complaint, Williams reported that he had used the funds from his first paycheck to purchase items for his trip. Williams sent the following images of himself in camouflage gear that he had purchased online in April 2021.

"This defendant proved persistent in his efforts to join ISIS – speaking with enthusiasm about acts of horrific bloodshed in the Middle East and here at home," acting Seattle U.S. Attorney Tessa M. Gorman said in a news release. "I want to commend those citizens who contacted law enforcement – including his family and faith community — expressing concerns about the defendant’s radicalization."

According to the complaint, Williams also suggested carrying out an attack during the Seattle Pride Parade. He allegedly shared with an informant that it's one of the biggest pride parades in the U.S. but that his attempt to convince a friend to join him in an attack was unsuccessful

When he was arrested, the complaint said, Williams agreed to speak with investigators. The complaint quotes him as saying that he intended to become an "executioner" or a "machine-gunner."

"It doesn’t matter what you guys do to me. I get rewarded for it," Williams said, according to the complaint. He added: "I want to die. We love our deaths more than you love your lives."