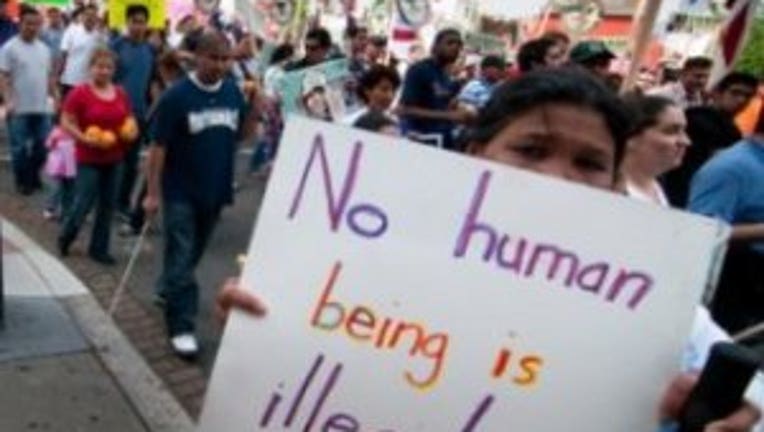 WASHINGTON -- Immigration and Customs Enforcement officials have released “several hundred” immigrants from deportation centers across the country, saying the move is an effort to cut costs ahead of budget cuts due to hit later this week.

Announcing the news Tuesday, ICE officials said that the immigrants were released under supervision and continue to face deportation. After reviewing hundreds of cases, those released were considered low-risk and “noncriminal,” officials said.

The releases took place over the last week and were an effort “to ensure detention levels stay within ICE's current budget,” said ICE spokeswoman Gillian Christiansen, citing uncertainty caused by a budget standoff in Washington.

“All of these individuals remain in removal proceedings. Priority for detention remains on serious criminal offenders and other individuals who pose a significant threat to public safety,” she said.

Much of the federal government is braced to feel the pinch from $85 billion in across-the-board budget cuts due to start Friday. Both Republicans and Democrats have said they oppose the cuts, but the two parties cannot agree on a budget deal that would avert them.

ICE’s decision was praised by some who have long criticized the rise in detentions and deportations under the Obama administration. Human rights and immigration advocates have accused the administration of ramping up arrests in response to political pressure.

“We have long advocated for expanded use of alternatives to detention, a step we knew would save taxpayers millions of dollars,” said Ruthie Epstein of Human Rights First. “It is a shame that it took the threat of serious budget cuts to prompt this move. Even so, ICE’s decision makes clear that the government can save money by reforming its approach to immigration detention.”

Officials say the released detainees are under other forms of supervision, including electronic and telephonic monitoring. Their cases continue to proceed in court.

Still, some Republicans blasted the announcement as part of the White House's attempt to gin up public outcry about the looming spending cuts. House Judiciary Committee Chairman Bob Goodlatte, R-Va., said the decision was a political ploy that put the public in danger.

“It’s abhorrent that President Obama is releasing criminals into our communities to promote his political agenda on sequestration,” Goodlatte said in a statement. “By releasing criminal immigrants onto the streets, the administration is needlessly endangering American lives.”

Homeland Security Secretary Janet Napolitano hinted at the coming news Monday, when she outlined the impact the budget cuts would have on her agencies. Napolitano said ICE would not be able to maintain its inventory of detention beds if the department is forced to cut roughly 5% of its budget this year.

“Look, we’re doing our very best to minimize the impacts of sequester.  But there’s only so much I can do,” Napolitano said. “I’m supposed to have 34,000 detention beds for immigration.  How do I pay for those?  We want to maintain 22,000-some odd Border Patrol agents. I got to be able to pay their salaries.”