(CNN) -- A tense, weeklong showdown appeared to end Saturday between the federal government and supporters of a Nevada cattle rancher battling the Bureau of Land Management (BLM) over grazing rights on federal land. 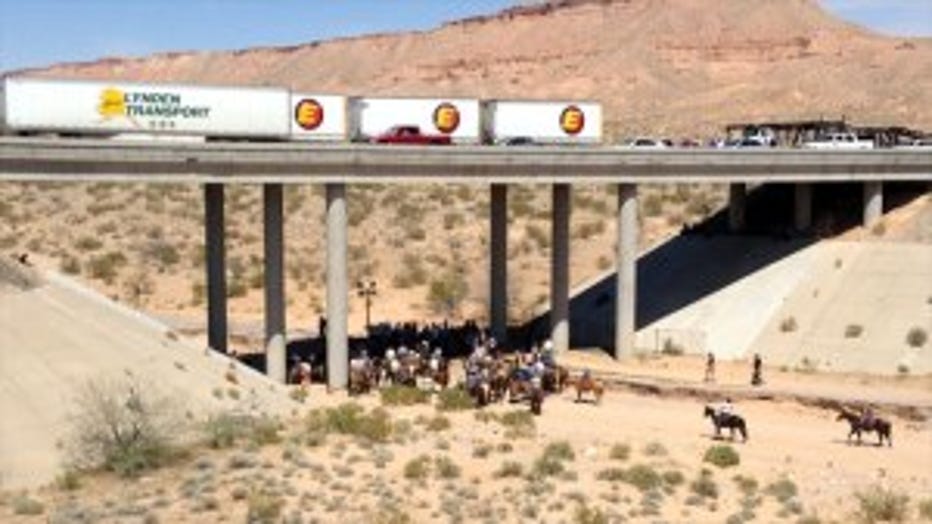 The BLM stopped rounding up rancher Cliven Bundy's cattle and returned about 300 head of cattle to the open range to avoid the potential for violence, according to the BLM and CNN affiliate KSNV.

The Old West-style controversy -- centering on a family that has been ranching in Nevada since the 1800s -- drew armed militia groups from across the country to the cattleman's side this week, especially after a YouTube video captured a tussle teetering on violence between rangers and protesters.

The BLM said Bundy owed about $1 million in back fees because his cattle grazed on federal land.

On Saturday, hundreds of protesters gathered outside the BLM's cattle gate, according to CNN affiliate KLAS. Some of them were armed.

"Due to escalating tensions, the cattle have been released from the enclosures in order to avoid violence and help restore order," the BLM said in a prepared statement.

Also Saturday, supporters of Bundy, some of them armed, forced a temporary shutdown of northbound lanes of Interstate 15 near his ranch, the Nevada Highway Patrol said.

"Based on information about conditions on the ground, and in consultation with law enforcement, we have made a decision to conclude the cattle gather because of our serious concern about the safety of employees and members of the public," said BLM director Neil Kornze.

The highway was reopened early Saturday afternoon after protesters moved to the side of the road and stopping blocking it. But traffic was backed up for three miles in both directions, Trooper Loy Hixson told CNN. He said nobody in the crowd threatened violence.

It was unclear whether Bundy and the BLM had come to an agreement on how to end the long-running conflict.

"The dispute is over, the BLM is leaving, but emotions and tensions are still near the boiling point, and we desperately need a peaceful conclusion to this conflict," Heller said in a statement. "I urge all the people involved to please return to your homes and allow the BLM officers to collect their equipment and depart without interference.

"We are very close to a calm, peaceful resolution but it only takes the action of one individual to stir things up again and bring us back to the brink of violence and no one wants to see that happen," Heller said.

The growing protest came amid the BLM's decision to put an early end to a roundup of Bundy's cattle, which the feds claim have been illegally grazing on federal land for 20 years.

Earlier Saturday, Kornze said that contracted wranglers and U.S. rangers apparently made enough progress in rounding up cattle that belonged to Bundy, who is challenging federal authority in a valley that his family settled in the Wild West era.

The roundup occurred near the scenic Virgin River at Bunkerville, where Bundy's ranch is located.

"After one week, we have made progress in enforcing two recent court orders to remove the trespass cattle from public lands that belong to all Americans," Kornze said in a statement.

He was referring to how two different federal judges ordered the removal of Bundy's cattle.

Bundy's dispute with the government began around 1993 when the bureau changed grazing rules for the 600,000-acre Gold Butte area to protect an endangered desert tortoise, CNN affiliate KLAS reported.

Bundy, who's in his 60s, cites the Constitution in asserting that the state of Nevada holds sovereignty over the charging of grazing fees and, if he owes such a fee, he would pay it only to the local government -- not to the feds.

Bundy also contends his family has been ranching in the Virgin Valley on the Nevada range since 1877 -- long before the BLM even existed and before the tortoise was declared endangered.

Bundy has said he owns 500 of the more than 900 cattle that federal officials had been planning to confiscate for illegal grazing, according to local media accounts, with each head worth about $1,000.

The rancher couldn't be immediately reached for comment Saturday after the feds shut down the roundup.

On Wednesday, a scuffle between protesters and federal rangers was videotaped.

Bundy family members and their supporters confronted the rangers and angrily told them to leave Nevada. Fearing that the cattle were being killed in the roundup, they also demanded to know why a backhoe and dump truck was being used, but federal officials later said the equipment was used to restore the range.

For their part, federal rangers held Tasers and barking dogs on leashes during the faceoff.

Federal officials say a police dog was kicked and officers were assaulted. Bundy family members say they were thrown to the ground or jolted with a Taser.

In the end, the rangers got into their white SUVs and drove away, a YouTube video of the incident showed.

The incident is under federal investigation.

Gov. Brian Sandoval said Saturday of the BLM decision: "The safety of all individuals involved in this matter has been my highest priority. Given the circumstances, today's outcome is the best we could have hoped for. I appreciate that the Department of the Interior and the BLM were willing to listen to the concerns of the people of Nevada."

"I want to stress to all of you that as the sheriff of Clark County I cannot interfere with the Federal government when it is operating on Federal land," Gillespie said. "And because this is BLM property, it is in their jurisdiction. But when a group of protesters threaten civil unrest or violence in this county -- it is my job to step in and ensure the safety of citizens."