Northwest governments and tribes will be able to kill up to 716 sea lions in the Columbia River over the next five years after the federal government approved a permit Friday in an effort to boost salmon and steelhead survival.

COLUMBIA RIVER, Wash. - Northwest governments and tribes will be able to kill up to 716 sea lions in the Columbia River over the next five years after the federal government approved a permit Friday in an effort to boost salmon and steelhead survival.

The controversial program is years in the making. Congress changed the law in 2018 to allow tribal and government fish managers to kill sea lions that are preying on endangered runs on the Columbia and Willamette rivers, but National Marine Fisheries Service still needed to study and approve a permit to execute it.

The government received more than 22,000 public comments on the permit application. Less than 200 of those comments supported allowing governments and tribes to kill sea lions.

Marine mammal populations rebounded after federal laws stopped humans from hunting them in the 1970s. Now in abundance, humans are trying to stop sea lions from hunting endangered fish. 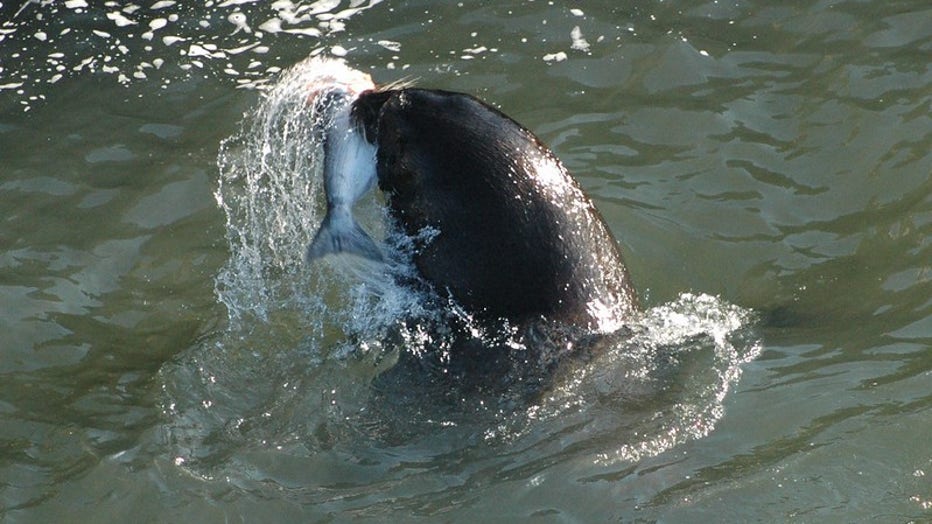 The federal permit lists Oregon, Washington and Idaho government fish managers and several tribes. It allows for killing up to 540 California sea lions and 176 Steller sea lions along a nearly 200-mile stretch of the Columbia River between the Interstate 205 bridge and McNary Dam over the next five years. The range also includes any tributary to the Columbia River below the McNary Dam that is home to threatened or endangered salmon or steelhead.

Previously, only California sea lions could be killed if the specific animal was documented showing repeated behavior that was detrimental to fish recovery. Now, any sea lion can be targeted that’s found in the range.

One of the biggest problem areas is Bonneville Dam, where sea lions are treated to a buffet of fish.

“That bottleneck at an impoundment creates a perfect pinch point for the fish where sea lions can just have easy pickings,” said Kessina Lee, Southwest regional director for Washington Department of Fish and Wildlife.

But not everyone agrees that picking off sea lions is the answer.

“Killing sea lions is like putting a Band-Aid on a hemorrhage, it’s not going to stop what’s causing the bleeding,” said Sharon Young, marine issues field director for The Humane Society.

Young is one of two voices on a task force that voted against approving the permit. Sixteen voted in favor.

Lee, who voted in favor of the application her agency submitted, disagreed.

“To do all of the other things we’re doing with regard to habitat and hydropower and fisheries management and to not address predation in a meaningful way is really leaving out such a huge piece of the puzzle for salmon recovery that we do have to address it,” Lee said.

There are hundreds of thousands of sea lions on the West Coast, while just hundreds of them are believed to go into the Columbia River and its tributaries looking for food.

“If we have fewer sea lions recruiting into the system to these locations and these dams, then there won’t be such a need for removals down the road,” Lee said, believing removing the ones that are there will stop the cycle of sea lions coming in.

But Young said she doesn’t believe it’s a lasting solution. She said if you remove hundreds of sea lions, more will just follow fish up the river to replace them.

Now that the federal government has approved killing sea lions in this area, those against the decision are hoping they will at least study if the program makes a difference for salmon survival.

For most cases, sea lions will be caught in traps by the dams or darted using wildlife techniques, then given a lethal injection.