The Federal Reserve signaled Wednesday that it plans to begin raising its benchmark interest rate as soon as March, a key step in reversing its pandemic-era low-rate policies that have fueled hiring and growth but also escalated inflation.

WASHINGTON - The Federal Reserve signaled Wednesday that it plans to begin raising its benchmark interest rate as soon as March, a key step in reversing its pandemic-era low-rate policies that have fueled hiring and growth but also escalated inflation.

With high inflation squeezing consumers and businesses and unemployment falling steadily, the Fed also said it would phase out its monthly bond purchases, which have been intended to lower longer-term rates, in March.

In a statement issued after its latest policy meeting, the Fed it "expects it will soon be appropriate" to raise rates.

Though the statement didn't specifically mention March, half the Fed's policymakers have expressed a willingness to raise rates by then, including some members who have long favored low rates to support hiring.

Speaking at a news conference, Chair Jerome Powell expressed his view, as he has before, that controlling inflation is vital to a strong job market.

"We believe that the best thing we can do to support continued labor market gains," Powell said, "is to promote a long expansion, and that will require price stability." 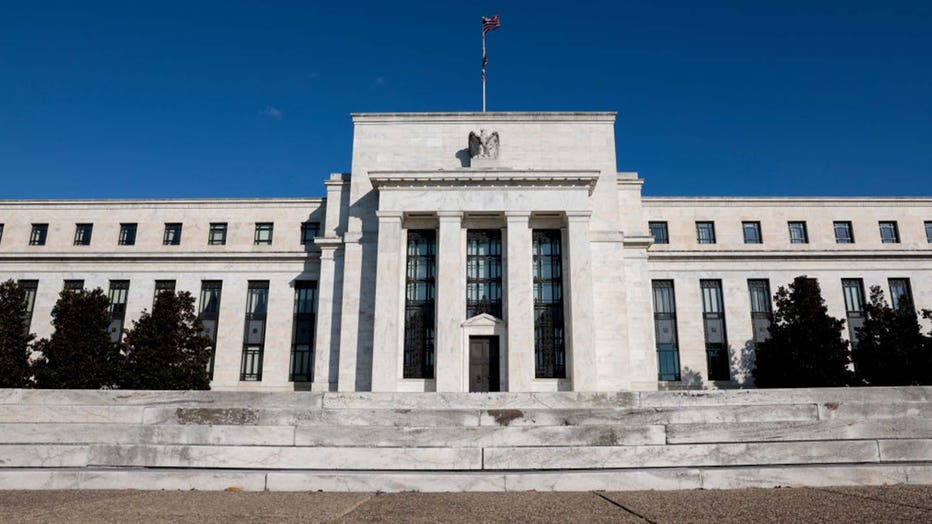 FILE - A view of the Marriner S. Eccles Federal Reserve building on Jan. 26, 2022 in Washington, DC.

The Fed on Wednesday also set out principles it will follow once it decides to reduce its nearly $9 trillion in bond holdings, a sum that has more than doubled since the pandemic struck nearly two years ago. Some analysts expect the Fed to begin doing so as soon as July, a move that would contribute to tighter credit.

The central bank’s actions are sure to make a wide range of borrowing — from mortgages and credit cards to auto loans and corporate credit — costlier over time. Those higher borrowing costs, in turn, could slow consumer spending and hiring. The gravest risk is that the Fed’s abandonment of low rates could trigger another recession.

The central bank's latest policy statement follows dizzying gyrations in the stock market as investors have been gripped by fear and uncertainty over just how fast and far the Fed will go to reverse its low-rate policies, which have nurtured the economy and the markets for years. The broad S&P 500 index fell nearly 10% this month before rebounding slightly Wednesday.

High inflation has also become a serious political threat to President Joe Biden and congressional Democrats, with Republicans pointing to rising prices as one of their principal lines of attack as they look toward the November elections.

Yet Biden said last week that it was "appropriate" for Powell to adjust the Fed’s policies. And congressional Republicans have endorsed Powell’s plans to raise rates, providing the Fed with rare bipartisan support for tightening credit.

The Fed's bond purchases have been intended to reduce longer-term interest rates to spur borrowing and spending. Many investors also saw the bond buying as helping fuel stock market gains by pouring cash into the financial system.

Earlier this month, minutes of the Fed’s December meeting revealed that the central bank was considering reducing its bond holdings by not replacing bonds that mature — a more aggressive step than merely ending its purchases. The impact of the reducing the Fed’s bond stockpile isn’t well known. But the last time that the Fed raised rates and reduced its balance sheet simultaneously was in 2018. The S&P 500 stock index fell 20% in three months.

By not replacing some of its bond holdings, the Fed in effect reduces demand for Treasuries. This raises their yields and makes borrowing more expensive

Some analysts have said they aren’t sure how big the impact on interest rates will be or how much the Fed will rely on reducing its balance sheet to affect interest rates.

All of which means the Powell Fed faces a delicate and even risky balancing act. If the stock market is engulfed by more chaotic declines, economists say, the Fed might decide to delay some of its credit-tightening plans. Modest drops in share prices, though, won’t likely affect the Fed’s thinking.

Some economists have expressed concern that the Fed is already moving too late to combat high inflation. Others say they worry that the Fed may act too aggressively. They argue that numerous rate hikes could unnecessarily slow hiring. In this view, high prices mostly reflect snarled supply chains that the Fed’s rate hikes are powerless to cure.

This week’s Fed meeting comes against the backdrop of not only high inflation — consumer prices have surged 7% in the past year, the fastest pace in nearly four decades — but also an economy gripped by another wave of COVID-19 infections.

Powell has acknowledged that he failed to foresee the persistence of high inflation, having long expressed the belief that it would prove temporary. The inflation spike has broadened to areas beyond those that were affected by supply shortages — to apartment rents, for example — which suggests it could endure even after goods and parts flow more freely.