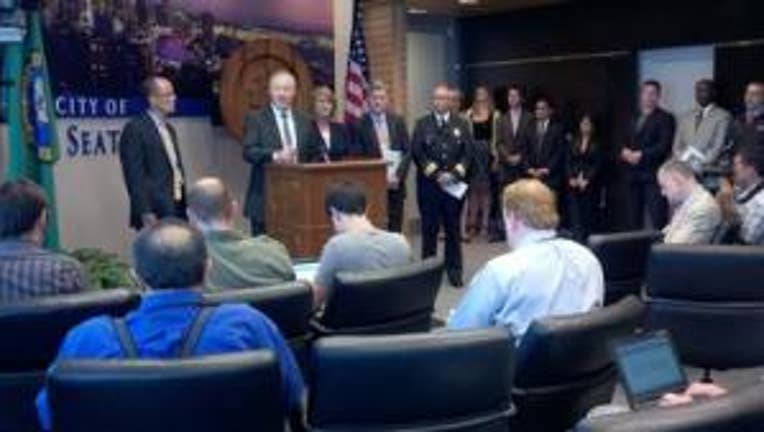 A federal judge gave provisional approval Friday to the settlement agreement between the Justice Department and the Seattle Police Department on a police reform plan that sought after the DOJ found officers had engaged in excessive use of force.

The judge expressed some concern that the two sides might not be able to find a qualified independent monitor of the plan within 60 days, as required under the plan. He also noted the the police department has 90 days to create a Community Police Commission. He said the clock would start ticking Monday.

It was announced July 27 that Justice Department and the city of Seattle had reached an agreement on the plan.

"We have reached an agreement that is a good, solid agreement," U.S. Attorney Jenny Durkan said. She added that it is a "Seattle solution," likely in reference to different police reform measures that have been instituted in other cities, most recently in New Orleans.

"The settlement agreement will require SPD to revise its use-of-force policies and enhance its training, reporting, investigations and supervision of uses of force," the Justice Department said in a statement.

"It also requires revisions to policies, training, and supervision relating to both bias-free policing, and stops and detentions; improves supervision and accountability mechanisms to ensure implementation of the reforms on the ground; and creates the Community Police Commission, a civilian oversight board with responsibilities regarding particular areas of reform."

An independent monitor will oversee the execution of the reforms but "does not supplant the role of the chief ," said Thomas Perez, assistant attorney general for the DOJ's Civil Rights Division. The monitor will be agreed to by both the Justice Department and the city of Seattle and appointed by a federal judge.

The new Community Police Commission -- to be appointed by the mayor and City Council -- will provide community input and address allegations of bias by the SPD.

The pact "specifically provides for the Community Police Commission to assess SPD’s outreach efforts and initiatives, provide input regarding data collection around stops and detention, and ensure transparency and public reporting," the Justice Department said.

"As part of the MOU (Memorandum of Understanding), the Community Police Commission also will lead a review of the structure of the city’s police accountability system.

Perez said, “This agreement provides a blueprint for reform with innovative methods for ensuring community engagement and sustainability.

Seattle Mayor Mike McGinn said, "We negotiated in good faith to ensure that our agreement protected public safety, responded to community concerns, aligned with Seattle values and addressed the unique challenges in our city.

The Seattle Police Officers Guild said that it was "pleased that the settlement agreement more closely resembles the city’s counter-proposal document (5-16-12) than the DOJ’s March 30th document on reforms.  SPOG is also pleased that, unlike other cities that have entered into Consent Decree Agreements, the role of the monitor in Seattle will be limited and the duration of the agreement is 36 months."

But Chris Stearns, the chairman of the Seattle Human Rights Commission, questioned the power of the future Community Police Commission.

“The community is just getting a chance to review the documents and it appears there are a lot of issues that still need to be reviewed and discussed," Stearns said. "For instance, the creation of a new Police Commission is definitely a step in the right direction, but if the Commission has no power other than to act in an advisory role, then we’re not sure how much, and how fast, change will happen.”

The mayor's office listed the following timeline in moving forward under the settlement:

One of the major sticking points in negotiations had been the DOJ's insistence that a court-appointed  independent monitor be appointed to oversee the handling of the police department's reforms. McGinn and the Police Department had been opposed to that initially.

The Justice Department had given Seattle a deadline of July 31 to come to an agreement on a package of reforms or face a federal lawsuit.

The DOJ's allegations stem from an uptick in reported excessive force used by the SPD — the culminating incident that prompted the community and eventually the ACLU to petition the DOJ was the Aug. 30, 2010, fatal shooting of Native American woodcarver John Williams by a Seattle police officer.

In December 2011, the DOJ said they had believed that excessive force had been used by the SPD in a number of incidents and called for reforms within the police department.

Instead, McGinn proposed what he calls a "20/20" plan, which identifies 20 reforms that would be implemented over the course of 20 months. That plan did not call for an independent monitor.