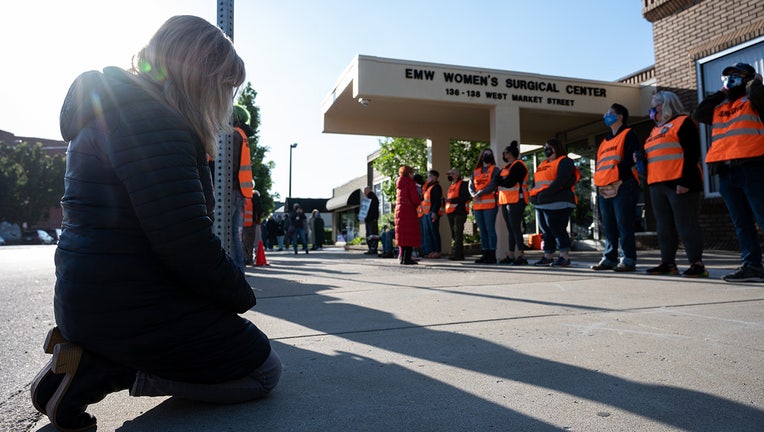 File: A pro-life demonstrator prostrates before a line of volunteer clinic escorts in front of the EMW Women's Surgical Center, an abortion clinic, on May 8, 2021 in Louisville, Kentucky. (Photo by Jon Cherry/Getty Images)

LOUISVILLE, Ky. - A federal judge in Kentucky has extended a temporary ban on the enforcement of a new state law that effectively ended abortions because the state's two clinics said they can't comply with all its requirements.

U.S. District Judge Rebecca Grady Jennings is giving the clinics more time to explain their objections to the law. Jennings extended a temporary restraining order until May 19, after the existing one expires Thursday. Jennings said, however, some parts of the law not in dispute by the two clinics and state officials would go into effect.

"I think there are pieces of this legislation that can be complied with right now," Jennings said. The judge is planning an order on those parameters this week.

Lawyers for the clinics, Planned Parenthood and the EMW Women's Surgical Center, were in court Monday to ask for a preliminary injunction on the law, which would be an extended ban.

Attorneys for the clinics went through line-by-line objections to Kentucky's new law during the four-hour hearing in Louisville's federal courthouse. Lawyers with Attorney General Daniel Cameron's office, which is defending the new law, argued throughout the hearing that the clinics need to provide facts on why they can't comply with the law.

"We maintain that there is no reason this law should be stopped from taking effect," Cameron said in a prepared statement Monday.

Lawyers for the clinics argued the law is complicated and the state has not yet set up the guidelines for them to comply with.

"We are hopeful the judge will take into consideration the arguments made today and prevent the state from enforcing these impossible requirements on abortion providers in the state of Kentucky," Julie Murray, a lawyer for Planned Parenthood, said after the hearing.

Kentucky's Republican-led legislature passed the new law in March and then overrode Democratic Gov. Andy Beshear’s veto of the measure in April. Both of the clinics resumed abortion services after Jennings temporarily halted the law last month.

The new law bans abortions after 15 weeks of pregnancy and requires women to be examined by a doctor before receiving abortion pills. It contains new restrictions and reporting requirements, and enforcement of that compliance with stiff fines, felony penalties and revocation of physician and facility licenses.