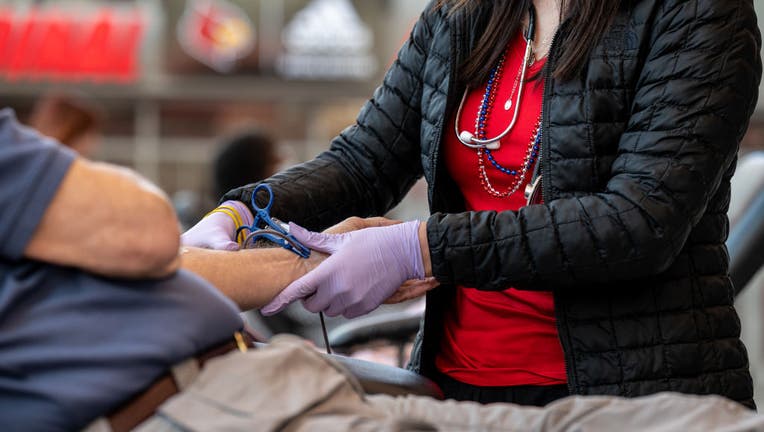 LOUISVILLE, KY - JULY 07: A phlebotomist tends to the arm of a blood donor at the KFC YUM! Center during the Starts, Stripes, and Pints blood drive event on July 7, 2021 in Louisville, Kentucky. Rising numbers of organ transplants, trauma cases, and

LOS ANGELES - Federal officials have moved closer to overturning a decades-old ban on blood donations from gay and bisexual men, after the Food and Drug Administration announced it "will likely support" the ban's end, the agency said Wednesday.

Currently, federal regulations prohibit blood banks from accepting donations from men who have had sex with men within the last three months. In a recent FDA-funded donor eligibility study, using blood surveillance information, the FDA says it will most likely support a policy transition that favors individual risk-based donor screening rather than the blanket ban that has been in effect.

"Although we do not have a specific timeline for when our analysis will be complete, the agency believes the initial data from the study, taken in the context of other data available from blood surveillance in the U.S. and in other countries, will likely support a policy transition to individual risk-based donor screening questions for reducing the risk of HIV transmission," the FDA said in a statement.

The agency says it is still working on draft guidance to be released "in the coming months." No other specifics have been released at this time.

The announcement follows similar action from other countries which have eased restrictions on blood donations by gay and bisexual men. In Canada, earlier this year, officials submitted to eliminate a three-month blanket donor deferral period for all sexually active men who have sex with men.

It remains unclear which specific questions will be used in the more individually focused screenings. Volunteers for the ADVANCE study answered questions pertaining to their own personal risk of being infected by HIV. Donated blood samples in this study were then sent off to research laboratories to be tested for the disease.

"We anticipate issuing updated draft guidance in the coming months incorporating key learnings from the ADVANCE study, as well as taking into account international developments in donor deferral policies. And, while we can’t comment on what might be in the content of the guidance, we can say that the screening policy we put forward will be gender neutral and science-based," the statement read.

The blanket ban dates from the early years of the AIDS crisis and was intended to protect the blood supply from what was a then little-understood disease. But many medical groups, including the American Medical Association, say the policy is no longer supported by science. Australia, Japan, the U.K. and many other countries previously moved to a one-year period.

All U.S. blood donations are screened for HIV but the testing only detects the virus after it’s been in the bloodstream about 10 days. Still, FDA officials have said current research does not support reducing the donation ban below the one-year mark, though the agency may consider changing the timeframe.

The U.S. blood banking system already bars donations from people who have had sex with a prostitute or an intravenous drug user in the past 12 months.

The FDA implemented the lifetime ban on donations from men who have sex with men in 1983, when health officials were first recognizing the risk of contracting AIDS via blood transfusions. Under the policy, blood donations are barred from any man who has had sex with another man at any time since 1977 — the start of the AIDS epidemic in the U.S.

The push for a new policy gained momentum in 2006, when the Red Cross, the American Association of Blood Banks, and America’s Blood Centers called the ban "medically and scientifically unwarranted." Last year the American Medical Association voted to oppose the policy.

Patient groups that rely on a safe blood supply, including the National Hemophilia Foundation, have also voiced support for dropping the ban.

The switch in policy could increase the U.S. blood supply by 2 to 4 percent by making 2 million additional men eligible to donate, according to researchers at UCLA’s Williams Institute.