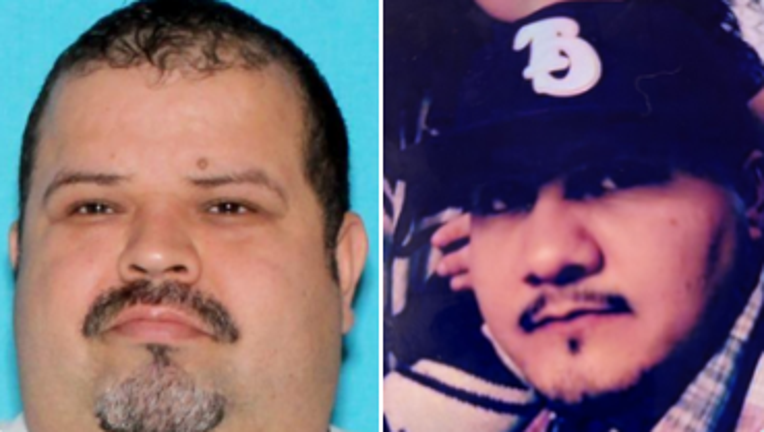 Cresencio Moreno Aguirre, 45, and Jorge Aguilar Duran, 42, are both wanted by the FBI in Seattle.

KING COUNTY - The FBI’s Seattle Field Office is asking for the public’s help to find two suspects charged in connection with a sprawling armed drug trafficking investigation in Western Washington.

Cresencio Moreno Aguirre, 45, and Jorge Aguilar Duran, 42,  were charged in June with federal drug trafficking offenses, along with 10 other members of a large-scale drug trafficking organization with ties to Mexico who have already been arrested.   During the bust on June 30, 2021, officers seized 48 guns, 2 kilograms of cocaine, 2 pounds of methamphetamine, several thousand fentanyl pills and two illegal marijuana grows.  During the operation,  they also seized a pill press used for manufacturing fentanyl-tainted pills.

"Over the course of two years, more than 250 FBI employees have contributed to this investigation to fight back against this widespread drug-dealing conspiracy," said Donald M. Voiret, FBI Special Agent in Charge of the Seattle Field Office. "

On June 23, 2021, a federal arrest warrant was issued after Jorge Duran was charged with conspiracy to distribute controlled substances of 500 grams or more of a cocaine mixture, possession of cocaine with intent to distribute, and prohibited person in possession of a firearm. 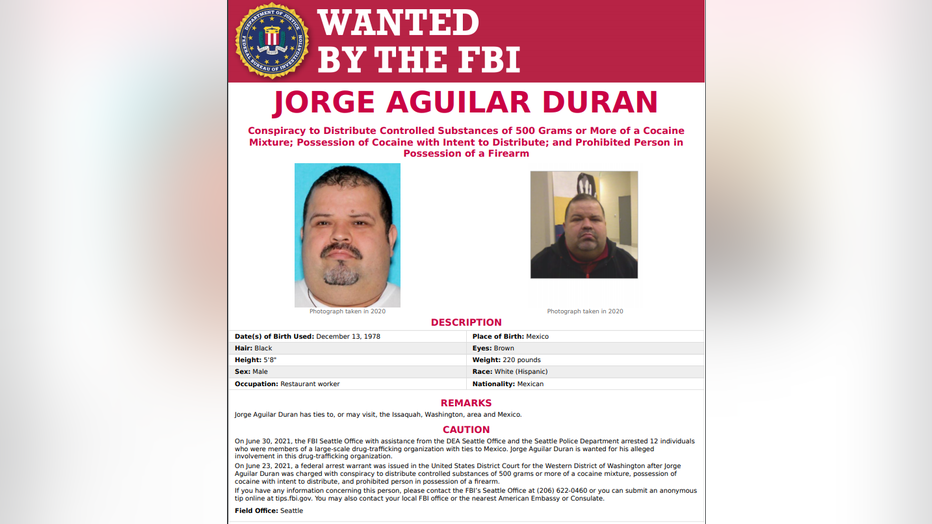 Jorge Duran is wanted by the FBI in Seattle

A federal arrest warrant was issued that same day for Cresencio Aguirre for Conspiracy to Distribute Controlled Substances of 500 Grams or More of a Cocaine Mixture. 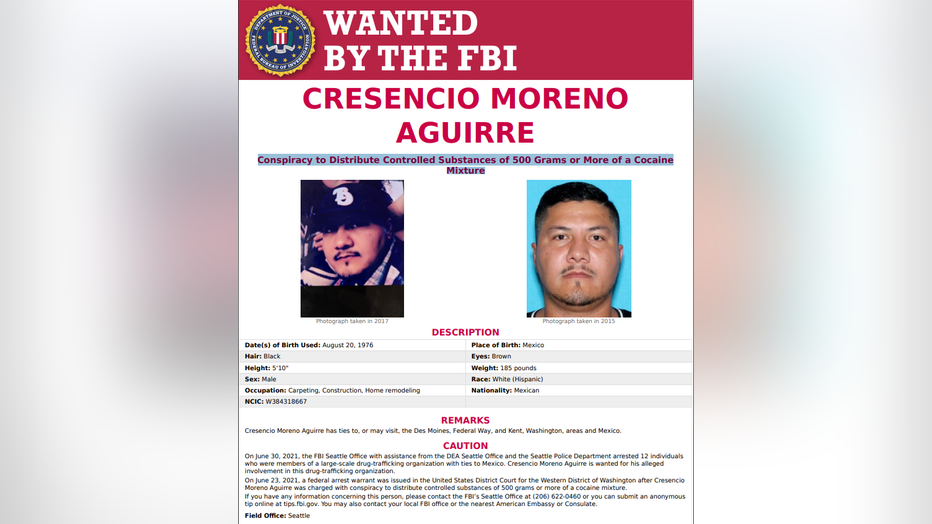 Cresencio Moreno Aguirre is wanted by the FBI in Seattle.

Aguirre was last known to live in Kent and frequent the Des Moines and Federal Way areas.   Agents say he works in carpeting, construction, and home remodeling.

Duran was last known to live and work at restaurants in the Issaquah area.  He may have fled to Mexico to avoid arrest and if so, agents would like information on exactly where he is hiding.

Both men were born in Mexico and have family there.

The indictments and arrests were a follow-up to the April 7, 2021 takedown involving 24 defendants. Both Moreno Aguirre and Duran are Mexican nationals who are not legally in the U.S.

If you have any information concerning either fugitive, please contact the FBI’s Seattle Office at (206) 622-0460 or you can submit an anonymous tip online at tips.fbi.gov. You may also contact your local FBI office or the nearest American Embassy or Consulate.

You can also submit an  tip to Crime Stoppers of Puget Sound for a cash reward of up to $1,000. Text the information through the P3 Tips App that you can download to your cell phone for free or call 1-800-222-TIPS (8477).  Tips may also be submitted at www.P3Tips.com.   All tips are anonymous.  You will never be asked to give your name.