BOSTON -- A day after bombs tore through the Boston Marathon, the nation mourned the dead and injured as officials examined shrapnel and debris for clues.

There were no suspects or claims of responsibility, but details began to emerge about the bombs that ripped through the runners and spectators, leaving at least three dead and 176 injured as Boston celebrated Patriots Day on Monday.

The explosions, within about 10 seconds of each other and less than 100 yards apart, turned what should have been a festive end to the grueling 26.2-mile race into a chaotic frenzy as rescuers desperately sought to help the wounded. At least 17 victims were in critical condition, including two children.

At an afternoon news conference, FBI Special Agent Richard DesLauriers said authorities had recovered items including “pieces of black nylon, which could be from a backpack, what appear to be fragments of BBs and nails possibly contained in a pressure-cooker device.” The bags would have been heavy, he said, urging anyone who had seen someone struggling with a heavy bag to come forward. 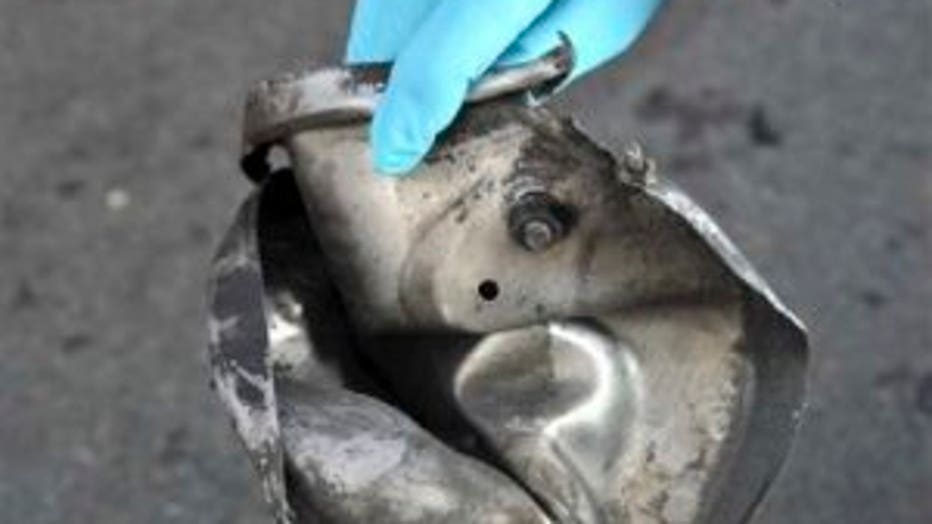 The FBI said the remains of this pressure cooker is believed to have contained one of the bombs at the Boston Marathon. (Photo: FOX 5/Atlanta)

{A video of the FBI/Boston news conference is below:}

The recovered material will be sent to FBI laboratories, where technicians will examine them and try to reconstruct the devices, he said. DesLauriers said the FBI was sorting through 2,000 tips and pursuing other leads.

The pressure-cooker type of explosive device is well-known to terrorism experts, having been used abroad and in a plot involving a planned attack in New York City.

Another law enforcement official said these types of explosives “most likely” would be triggered with timing devices and circuit boards rather than remote cellphones.

“We’re leaning towards timing devices,” he said, asking not to be identified because the investigation was under way. “With just 10 seconds between the two blasts, that might not have been enough time to set off both blasts with a cellphone.”

He also said that while pressure cookers are often used in the Middle East, they are also highlighted in bomb-making instructions available through the Internet in the United States.

In Boston, many of the dead and injured were sprayed with metal fragments, small nails and ball bearings, doctors and emergency responders told reporters. The bombs contained tiny pellets, similar to BBs, as well as other metal shards designed to make the weapons as deadly as possible.

Dr. Ron Walls, chairman of emergency medicine at Brigham and Women’s Hospital, said Tuesday that three of the hospital’s patients had shrapnel that appeared to include what he described as metal pellets about two to three millimeters in diameter. He said doctors also removed about a dozen small nails from one of the patients.

At Tufts Medical Center, doctors and nurses were cataloging all of the metal fragments removed from patients and turning it over to authorities, said Dr. William Mackey, chief of surgery. The shards ranged in size from a few millimeters to about a centimeter.

Dr. George Velmahos, chief of trauma surgery at Massachusetts General Hospital, said doctors there removed dozens of pellets, nails and other sharp objects from victims. He left open the possibility that some of the metallic fragments had been kicked up from the street but said that “most of them are in the bomb.”

For the first time, federal officials -- led by President Obama -- publicly acknowledged that the explosions were acts of terrorism. The president will travel to Boston on Thursday morning to speak at an interfaith service dedicated to the victims of the attack.

“This was a heinous and cowardly act and, given what we now know about what took place, the FBI is investigating it as an act of terrorism,” Obama said in televised comments from the White House. “Any time bombs are used to target innocent civilians, it is an act of terror.

“What we don’t yet know, however, is who carried out this attack or why,” the president said, pledging to use all resources to find those responsible. “We will find whoever harmed our citizens and we will bring them to justice.”

“We also know this,” Obama said. “The American people refuse to be terrorized.”

“We will go to the ends of the Earth to identify the suspect or subjects responsible for this despicable crime,” DesLauriers said at an earlier news conference.

Meanwhile, two of the dead were identified -- Krystle Campbell, 29, of Arlington, an assistant restaurant manager, and Martin Richard, 8, of Boston's Dorchester neighborhood.

The third person killed in the Boston Marathon bombing Monday has been identified as a Boston University graduate student. The student's identity was not released by the university in a Tuesday announcement, pending notification of the family.

China’s consulate in New York said a female Chinese citizen died in the bombings; it was not immediately known if she was the slain Boston University graduate student.

The father of the 8-year-old victim, Bill Richard, grieved along with neighbors and friends. Richard's wife and daughter were also wounded, and in a statement he called on everyone to pray for the family.

“My dear son Martin has died from injuries sustained in the attack on Boston,” his statement said.

“My wife and daughter are both recovering from serious injuries,” the statement continued. “We thank our family and friends, those we know and those we have never met, for their thoughts and prayers. I ask that you continue to pray for my family as we remember Martin. We also ask for your patience and for privacy as we work to simultaneously grieve and recover. Thank you.”

Neighbors and friends in the quiet Boston neighborhood where the boy had lived tried to come to terms with his death, bringing flowers and mementos to the family home, which police had surrounded with yellow tape by midmorning.

Friends and relatives of Krystle M. Campbell mourned her as the second victim of the Boston Marathon explosions.

“She was a wonderful person,” her mother, Patty, told reporters. “Everybody that knew her loved her. She loved her dogs … she had a heart of gold. She was always smiling. You couldn't ask for a better daughter. I can't believe this has happened. She was such a hard worker at everything she did. This doesn't make any sense.”

A jittery Boston awoke to heightened security a day after the attack. More than 400 members of the National Guard patrolled downtown. The adjacent blocks around Copley Square were blocked off with metal barricades and police tape, and many streets were closed to most traffic. Police and uniformed soldiers were allowing guests at nearby hotels -- some still in marathon gear -- to enter the restricted zone to retrieve their belongings from their rooms. Canine units were in the area.

“Everyone should expect continued heightened police presence, and everyone should continue personally to be vigilant,” Massachusetts Gov. Deval Patrick said at a news conference with top officials. “The investigation continues and until it is done, all of those in law enforcement represented by the leaders here will be present in force in the area around the blast and throughout the city.”

Patrick said no unexploded bombs were found at the Boston Marathon, contradicting earlier reports. Only the two bombs that exploded were found, he said.

“Yesterday, this terrorist brought to the city of Boston tragedy,” Mayor Thomas Menino said, then went on to praise first responders.

Runners were still trying to make sense of what they saw. For some, the explosions sounded celebratory, sounds one would hear at such an event. Nicholas Yanni, 32, a physics student, was with his wife near the finish line. He estimated that he was 10 feet away from a blast.

“It was like a cannon went off,” Yanni said. “At first I didn’t think anything of it.”

Security was increased around the country, including in Los Angeles, New York and Washington. Police eyed commuters in subways, cordons of security around landmarks were extended and everyone was urged to report suspicious packages and people.

In Washington, a U.S. government official said that there had been no intelligence about a possible attack in Boston during the weeks leading up to the bombings.

No one has claimed responsibility, but at least one foreign group, the Pakistani Taliban, denied any role. In the past, the group has threatened attacks in the United States because of Washington's support for the Pakistani government.

By By Richard A. Serrano, Shashank Bengali and Michael Muskal / Los Angeles Times. Bengali reported from Boston, Muskal from Los Angeles and Serrano from Washington.