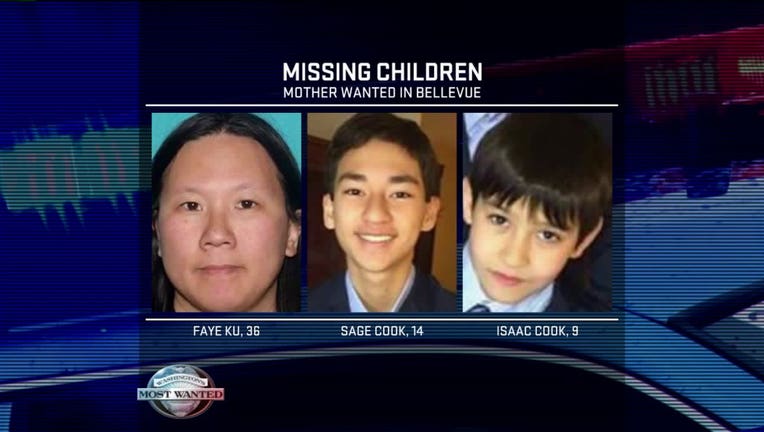 BELLEVUE -- Authorities are asking for the public's help after two boys were allegedly abducted by their mother who does not have custody. Sage and Isaac Cook's father put the boys on a plane to Los Angeles after receiving what he thought was a court order for a supervised visit. Authorities believe the boys' mother Faye Ku forged the order. The boys, ages 14 and 9, were last seen at LAX Airport on August 28. When officers searched Ku's apartment in Lakewood, California, they discovered it had been abandoned. Investigators say back in 2013, the boys' mother was stopped at Sea-Tac Airport as she tried to board a plane to Taiwan with the children. "It is very likely they're still in the country," says Bellevue Police Maj. Pat Spak. "We do not have any specific information that they are out of the country, however mom does have family and relatives in Taiwan and also in Mexico and also in Houston, Texas and possibly the San Francisco and Los Angeles areas." Sage is 5' 6", 109 pounds, with brown hair and brown eyes. His younger brother Isaac is 4' 6", 64 pounds, with brown hair and brown eyes. Faye Ku is 41-years-old, 5' 3", 185 pounds with brown hair and brown eyes. The boys' family is offering a $25,000 reward for information leading to their safe return. If you can help, call Bellevue Police or 911. The family set up a Facebook page with more information here.