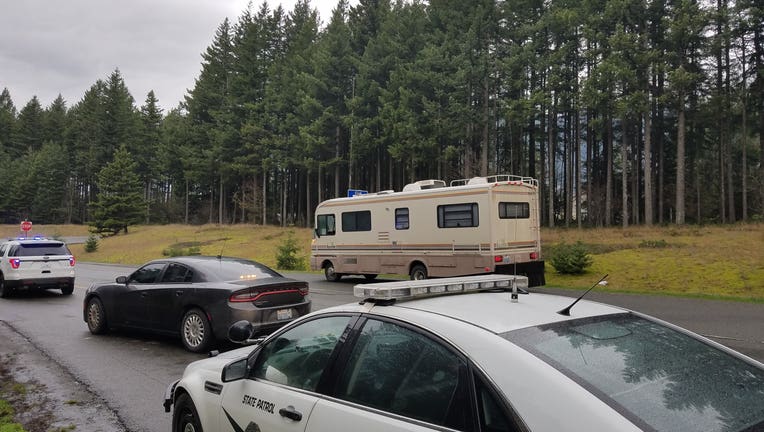 A father of four children who was arrested and released Tuesday night after prompting a statewide AMBER Alert was arrested again Wednesday for reportedly violating a protective order.

It all started Tuesday evening, when 42-year-old Nicholas Antonie and his wife Crystal abducted their own children after being ordered to turn them over to Child Protective Services.

WSP says the family was located in Cheney near Spokane around 7 p.m. The children were found safe, and the parents were taken into custody and later released.

Nicholas Antonie has a history of psychiatric treatment and has threatened social workers in the past. Police believe he may have been armed with an AR-15. Crystal also has a history of mental health problems and substance abuse.

The father spoke to media outlets after the pursuit and said he was confident he'd get his children back.

"I know that once things get sorted out, there's no way my kids are going to be taken away from me," he said. "They love me, they love their mother. We're a good family. We've just had a lot of problems."

AMBER Alert canceled for 4 children abducted out of Seattle; suspects in custody

Washington State Patrol has canceled an AMBER Alert for several children Seattle Police say were abducted by their own parents Tuesday.

But Trooper Rick Johnson said Antonie was arrested again Wednesday, the day after the AMBER Alert was issued, because Seattle Police had probable cause that he violated a protective order.

Someone called police after seeing the same motorhome from the AMBER Alert coming out of the woods in Ellensburg.

Troopers spotted the RV on I-90 between MP 34 and the pass, and Antonie was arrested again without incident.

He's being taken to the King County Jail.

The children remain in CPS custody, Johnson said, and Antonie's wife was dropped off in Moses Lake Tuesday night. She was not in the motorhome when Antonie was arrested again.