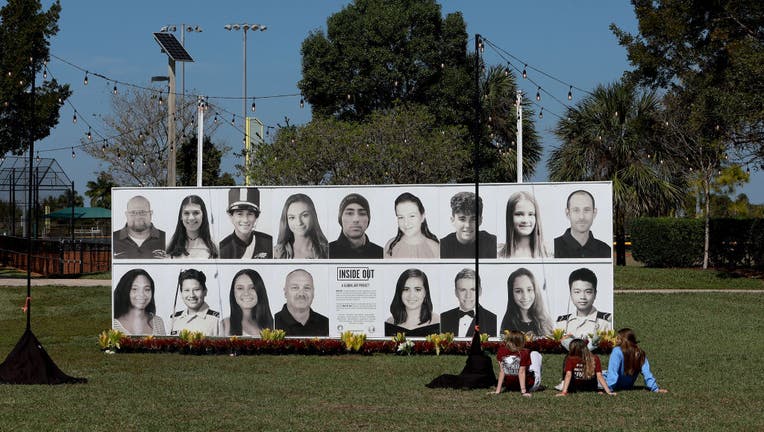 PARKLAND, FLORIDA - FEBRUARY 14: People sit in front of a photo display of the 17 people killed at Marjory Stoneman Douglas High School during a mass shooting on February 14, 2022 in Pine Trails Park in Parkland, Florida. Four years ago on February 1

FORT LAUDERDALE, Fla. (AP) - A man whose 15-year-old son was killed in the 2018 school massacre in Parkland, Florida, said Wednesday that he’s in physical pain thinking of what parents of children killed at a Texas elementary school are going through.

"I know what those families had to endure sitting in a room waiting to hear that their child is laying in a school on a floor. It is heartbreaking, heartbreaking," Tom Hoyer said as he stood outside the courtroom in Fort Lauderdale where jury selection for the penalty trial for the murderer, Nikolas Cruz, was underway.

"I hope their journey through all of this is a lot faster than ours," Hoyer said as his voice broke and his knees shook.

THE SHOOTER: Who is Salvador Ramos? What we know about Texas elementary school shooting suspect

His son Luke was among 14 students and three staff members killed on Valentine’s Day 2018 at Marjory Stoneman Douglas High School.

Cruz, now 23, pleaded guilty in October to 17 counts of first-degree murder and to the wounding of 17 others. The trial will decide whether Cruz is sentenced to death or life in prison without parole.

MORE: What we know about the victims in Uvalde

The slow process of choosing jurors is in its second phase, which consists of about 400 jurors who made it through the initial phase being questioned in groups by attorneys.

On Wednesday morning, the Texas shooting was discussed by the lawyers. The defense will get to ask some general questions about school shootings, but not specifically about the shooting at Robb Elementary School in Uvalde, Texas. An 18-year-old gunman entered the school and slaughtered 19 students and two teachers in a fourth-grade classroom, authorities there said.