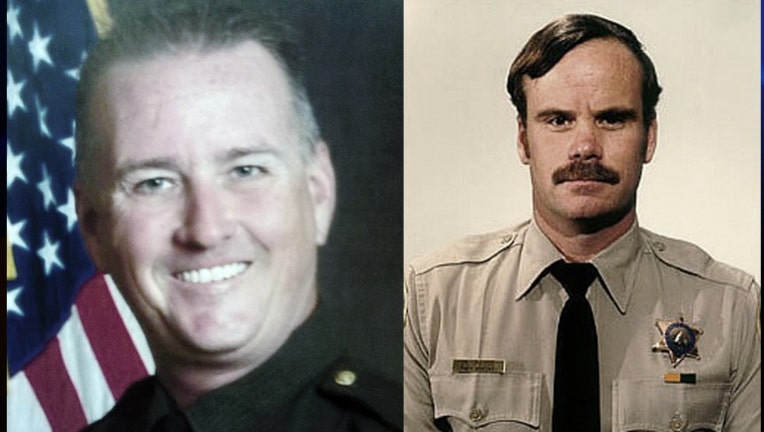 (CNN) -- The California shooting rampage began in a parking lot of a $56-a-night motel outside downtown Sacramento when two sheriff's deputies checked on a suspicious car there.

By the time the spree was over, authorities said, the suspects killed two sheriff's deputies in two counties, wounded a third deputy, attempted three car carjackings and shot one of those drivers in the head -- all during a span of six hours Friday, prompting school lockdowns and a massive manhunt.

The dragnet was successful: Marcelo Marquez, 34, of Salt Lake City, Utah, was arrested Friday after police found him in a home in Auburn, about 30 miles from the initial shooting, authorities said. Also arrested was Jannelle Monroy, 38, of Sacramento County, who was allegedly with Marquez during the rampage, authorities said.

Killed was Sacramento County Deputy Danny Oliver, 47, a 15-year veteran with a wife and two daughters. The other slain officer was Placer County Deputy Michael David Davis Jr., 42, an 18-year veteran with a wife and four children. Davis died exactly 26 years later to the day that his father, a Riverside County sheriff's deputy, was killed in the line of duty, authorities said.

The wounded deputy, Jeff Davis of Placer County, was shot in the arm and later treated and released, and the driver, Anthony Holmes, 38, was in serious condition in a hospital, according to authorities and CNN affiliates.

The two suspects' motive remained a mystery on Saturday as authorities continued their investigation and weighed what charges to file. Investigators will take weeks in putting together the string of crime scenes, police said. Officials believe Marquez is responsible for all the shootings, according to reports.

"This guy was on a one-man crime spree today. He has no idea of the damage he did," Placer County Sheriff's Office spokesman Dena Erwin told reporters after Marquez's arrest.

Added Placer County Sheriff Ed Bonner at a news conference: "I think there's those people who would say, 'You know what, I wish you'd killed him.'

"Now, that's not who we are. We are not him. We did our job," Bonner told reporters.

Shot in the jaw

Events began shortly before 10:30 a.m. when Oliver and his partner found themselves being fired upon by at least one of the suspects in a vehicle in the parking lot of Motel 6, authorities said.

The gunfire surprised Oliver, who wasn't able to fire a shot, but his partner did return fire, and the suspects fled, authorities said. Oliver was shot in the forehead, police said.

Then a total of three attempted carjacking occurred, two of them successful, according to CNN affiliate KCRA, citing authorities.

The first was Holmes' vehicle, but he fought the carjacking attempt, police said. He was shot in the jaw, CNN affiliate KOVR reported.

"Anthony Holmes is a strong guy," friend Tyrone Murphy told KOVR. "He wouldn't let someone take his car, but officially the guy had a gun, and he couldn't beat the bullet."

Holmes fell back into his car, police said.

"By his falling back (into his car), that could explain why the suspect was unable to carjack that vehicle," Sacramento County Sheriff Scott Jones said.

The two suspects carjacked a Mustang and ditched it. They then carjacked a red Ford F-150 truck and drove to Placer County, KCRA reported.

Authorities arrested Monroy in or near the hijacked truck, and Marquez allegedly ran from the scene, said Erwin.

A SWAT team, police armored vehicles and gun-drawing officers formed a perimeter around the neighborhood and set up checkpoints to inspect the car trunks of passing motorists, the Sacramento Bee reported.

"It looks like a TV show around here," Hazel Haase, who lived next door to the home where Marquez allegedly was hiding, told the newspaper by telephone during the siege.

The owner of the home where Marquez was found helped police by drawing a floor plan, the newspaper reported.

Marquez was arrested without putting up a struggle and was taken to a hospital with a gunshot wound to his hand, according to a CNN affiliate.

His ID was found on the dashboard of one of the vehicles he allegedly carjacked, KCRA reported.