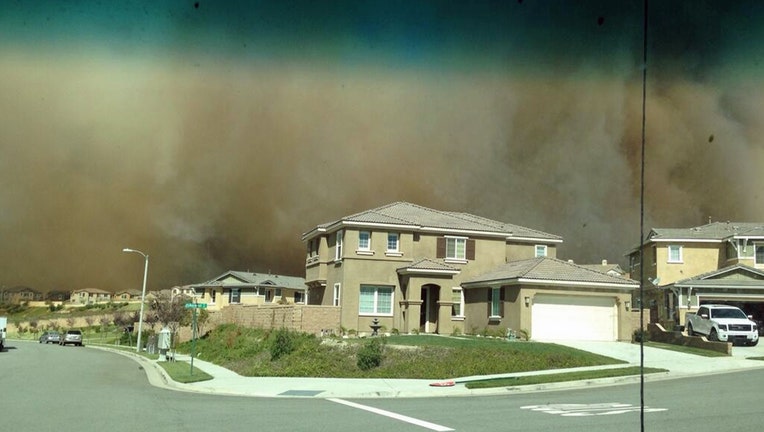 A brush fire was burning near Rancho Cucamonga on Wednesday April 30, 2014. (Credit: KTLA)

RANCHO CUCAMONGA, Ca – More than 11-hundred homes were under a mandatory evacuation order Wednesday as a fast-moving wildfire raced across sections of San Bernardino County in Southern California reported KTLA-TV.

The Etiwanda Fire was called in by residents at about 8 a.m., according to Fire Chief Mike Bell of the Rancho Cucamonga Fire Department and likely started in the San Bernardino National Forest.

KTLA-TV reported that the fire burned more than 800 acres by 1:30 p.m. Wednesday.

Three schools had to be evacuated and a temporary evacuation center was established according to the sheriff’s department.

The blaze came amid a high-wind warning for the region, with gusts expected to peak between 60 and 90 mph, according to the National Weather Service. The warning was in effect through 5 p.m. Thursday.

Santa Ana winds were predicted to blow through the area from the northeast toward the southwest, with a slight decrease on Wednesday evening, the weather service stated.