On Monday, crews spent the day putting together stages and other infrastructure at the Fisher Pavilion Lawn where the rally is scheduled to take place.

On Monday, crews spent the day putting together stages and other infrastructure at the Fisher Pavilion Lawn where the rally is scheduled to take place.

It’s all to get ready for a party many fans say will be larger than life.

“I got a hat for my son who is three,” said Ashley Savage.

Shelves at retailers were stacked with shirts and scarves bragging on the Sounders’ second championship win.

“Yesterday was crazier than when we won the Super Bowl,” said Brennan.

Tuesday’s celebration parade is scheduled to begin around noon at Westlake Center then move on 4th Avenue toward Seattle Center, where a rally is scheduled for 1:30 p.m. 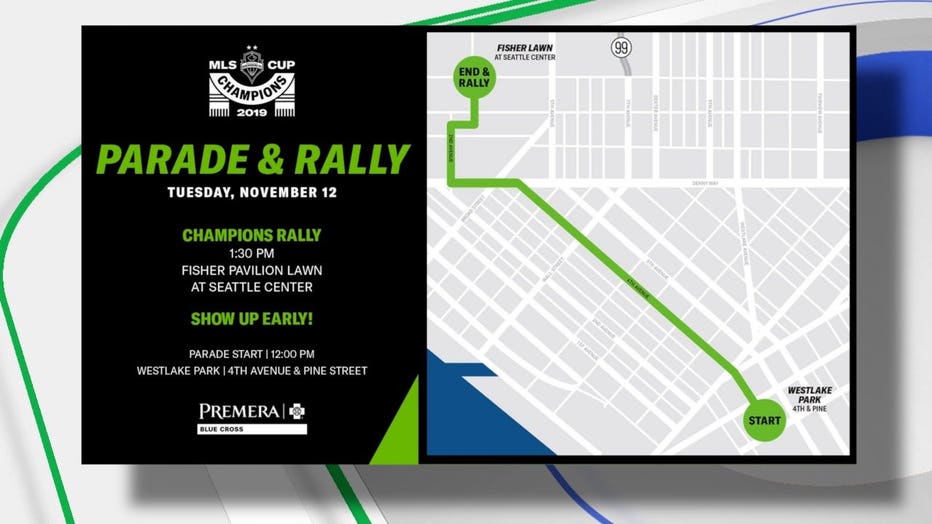 Even though Tuesday means going back to school or work for many, it’s likely many fans will avoid those responsibilities.

“It’s hard on a Tuesday but you know what,” said Savage. “There is nothing that your kids are going to learn in school on Tuesday afternoon that is more important.”

Parking is also expected to be an issue. Anyone planning to attend the events is being encouraged to ride transit.