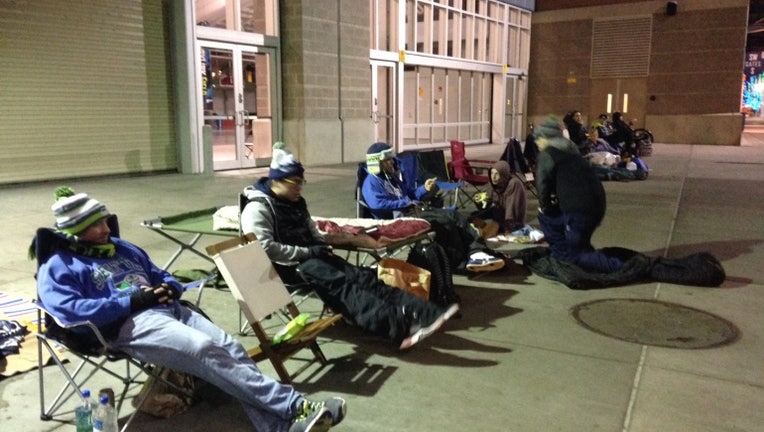 SEATTLE -- Fans are anxious for next week’s NFC championship matchup, and doing what they can to make sure they can be a part of it.

According to the Seahawks, 98% of season ticket holders reserved their playoff tickets. Tomorrow, a lottery will be held for Blue Pride waitlist members. Then Tuesday, the general public will get their chance to buy tickets. But there will be a limited number of those, probably around 1200. That’s why some fans are lining up for their chance to get tickets now.

“I’ve gone online before and it’s really hard to get tickets,” says Jim Borda, the first person in line outside the CenturyLink field box office. “So I thought I’d come here, see how many people were in line. There’s no one here.”

“I’ve already put into the boss and got the day off,” says Creighton Beckett, who got in line 48 hours before tickets go on sale. “I’ve got my tent and my sleeping bag, but I need to rile up some food and a few other things.”

Tickets don’t go on sale until Tuesday at 10 am, but you can’t wait if you want to be in. Just ask hoteliers around the stadium. They started booking rooms right after the Hawks beat the Panthers.

“The phones started ringing immediately,” says Antoine Anderson, who works at the Best Western Plus in Pioneer Square. “We got calls last night, all through the night. We got calls this morning.”

That hotel is already 70% full for next weekend. Other hotels Q13 Fox checked are at 80% occupancy. So Packers fans, or Hawks fans coming from a distance, need to act fast.

“They should not wait,” says Anderson. “They should go ahead and book as soon as possible.”

Because no matter what, next week is the last home game of the season. And even though it seems like the Hawks can’t lose, no one knows the next time there will be a season like this again.

“At my age, I know experiences like that are hard to come by,” says Beckett.

“I went last year to the New Orleans game, and I want to see the championship game this year,” adds Borda. “It’s not too often you get to see that.”

Beckett says he doesn’t care where his tickets might be. “I just want to get in and feel the energy. The stadium is just so much fun, and to think this is the last game before going to the Super Bowl for a second year in a row. The energy is just going to be incredible.”