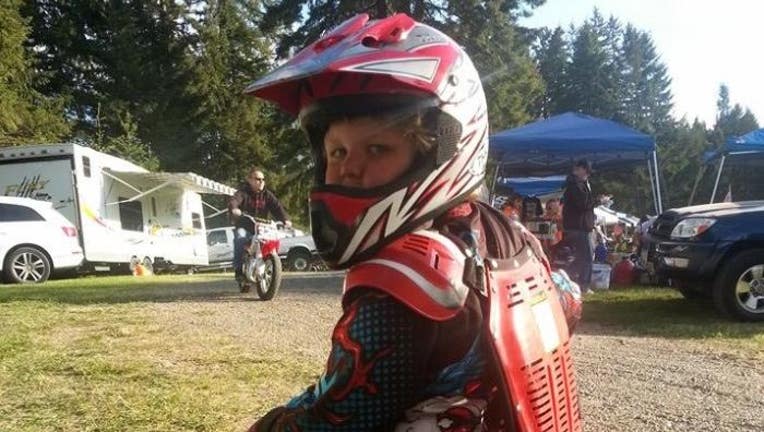 LEWIS COUNTY, Wash – The search continues for a 5-year-old Tacoma boy feared drowned in Lewis County over the weekend.

Divers spent Tuesday searching the Cispus River near Randal after the Drake Ostenson accidentally crashed his dirt bike into the water and was swept away Monday during a holiday camping trip with his family.

The family released a photo of the boy to Q13FOX News and said they are 'desperate' to find him and know conclusively what happened.

Divers thought they spotted the Ostenson’s helmet down river snagged on a logjam, but it turned out to be his visor.

Police say the boy’s mother and father immediately jumped into the frigid water — chasing after him — but they, too, were nearly swept away.

“It happened really quick,” said Lewis County Sheriff Steve Mansfield. “The father got in the water, he tried to check all the holes where the boy could have hung up or gone under and we almost lost him (the father).”

Just underneath the water’s surface, Ostenson’s motorcycle is visible.

Investigators believe his parents were exercising due caution; so far no criminal investigation is under way.

Police say the boy was an experienced rider.

“Initially you’d think a 5-year-old on a bike, that’s pretty young,” said Mansfield. “For a 5-year-old he was extremely experienced and his whole family has been doing the motocross thing. He knew how to ride.”

The sheriff’s office had trouble finding a helicopter to help in the search, so a local TV news chopper was helping search the river for Ostenson.

“Checking all the little fingers and all the log jams,” said Mansfield. “I feel confident in time we will be able to do that and return him to the family.”