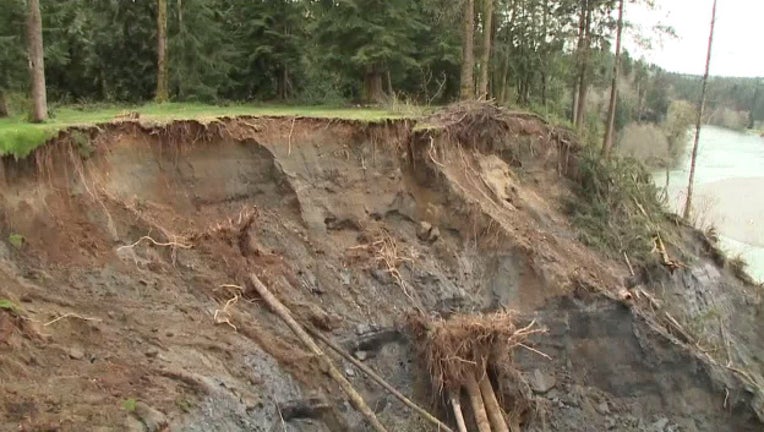 SNOHOMISH COUNTY -- An Arlington family has been watching their backyard disappear since 2006. They say the county tells them there is little the government can do to help because this is private property and the public is not at risk.

For homeowner Juanity Eanes, the holes in her backyard just keep getting bigger.

"There are holes," she said. "At times you'll be walking by and you'll see there's a hole in the ground."

Just a few yards from her back door is a giant landslide that is slowly chewing away at her riverfront property.

"It's going to keep going. You can feel it in the house," Eanes said.

The sound of rushing water doesn't come from the south fork of the Stillaguamish; it's flowing directly out of the mud and clay.

In all, nearly 2 acres of her backyard has been eaten away. Eanes says when she's asked Snohomish County for help, they tell her she's on her own.

"If it was something that affected the public they would be all over it," she said. "Being it's just a personal situation, basically it's my problem."

The chasm appears to be about 80-feet deep in some areas. Eanes worries it is only a matter of time before her home is swallowed up.

"Losing my house, losing my property. Where do we go from there? We're still accountable for your mortgage if you lose your house and your land," Eanes said.

Now the Eanes have a travel trailer parked in their front driveway, so they'll have a place to stay if the land gives way.

"I've had friends and family that won't come out into the yard because it's so mushy and they're so afraid that they're going to go at any time," Eanes said.

So what's next? The family wants to hire a geologist to come and evaluate the situation, but they admit they do not have the money to pay for something like that. So right now, they're crossing their fingers that the slide will stop on its own.