Families save hundreds of dollars per year buying in bulk. Q13 Fox News

John James and his family are bulk shoppers. And one thing they buy a lot of is meat. This last month, they bought 90 pounds from Go Direct Foods. Customers order food online, then can pick it up on a weekly basis.

JC Conrad, owner of Go Direct Foods, says their research shows an average family of four can save five to six hundred dollars per year by buying bulk.

Conrad started the company after working in the grocery business. He watched delivery trucks unload large boxes for years. Then he would individually wrap the product for the shelf. That’s when he decided he could skip a few steps and pass the savings along to the customer.

“Well, I thought, ‘Let them do it,’” said Conrad. “If they want to take the time and process it a little bit, they can save that money.” 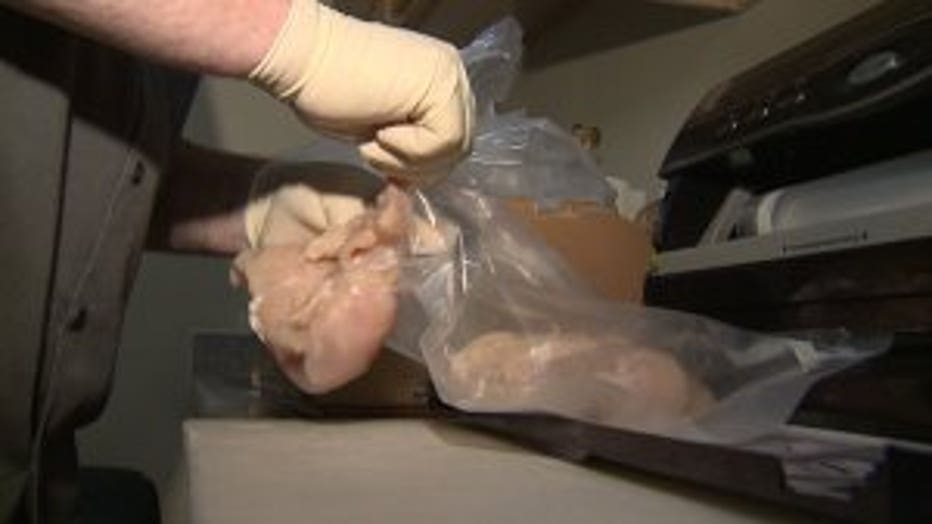 “I’ll probably spend about 20 minutes today repacking the chicken breast,” said James. “Everything else is ready to go into the freezer.”

James says the time he spends “processing” his own product is less than the time he would spend in the grocery store. Plus, he says it is easy to get started and figure out what to buy for your family.

“The secret is kind of start looking at what you eat,” James said. “What’s normally on your plate and what you could buy and prepare.”

He says if space is overwhelming, get creative.

“We have a freezer. Just bought a little freezer. If you looked under our bed, you’d find a lot of cans, canned foods.”

And if quantity is a concern, Conrad suggests you start by buying bulk and splitting it amongst multiple people.

Although Conrad admits you can buy bulk at almost any major grocery store these days, he says they also focus on convenience for customers. They have specific pickup locations where customers can grab their product, or they will deliver.

“The moms come pick it up and they’ve got three or four kids and they’re strapped in their car. Now they don’t have to get out of the car,” said Conrad. “We load it up in the back of their car for them.”

But he admits, not everyone will like the buying bulk model.

“I would be the first to say that this type of product may not be for everybody,” said Conrad. “But it is fantastic that you save a lot of money, you get to package it how you want it.”

Angela Russell, author of The Coupon Project blog, says it is a big commitment to buy this amount of food and prepare it for future use. But with one 40 pound box of chicken, she is able to prepare 17 meals for less than seven dollars per meal.

"On one hand, I’m not going to lie, this is a bit of an upfront time commitment," said Russell. "And one that I mentally prepare myself for going into. However, the time savings over the course of the days I’ll use the meals is substantial."

For James, though, he says this convenience allows him and his family to be foster parents and adoptive parents of four children, some with down syndrome. He is also a pastor and feeds all of these people, plus his congregation in his home.

“Doing stuff like this cuts down on expenses, which increases our ability to do other things, so we’re spending more time in our community.”