While thousands are struggling without power, a neighborhood in Marysville is struggling to get over the destruction they witnessed during Friday’s wind storm.

MARYSVILLE, Wash. - While thousands are struggling without power, a neighborhood in Marysville is struggling to get over the destruction they witnessed during Friday’s wind storm.

While power lines and trees fell during the storm, few communities were hit as hard as the area near 56th Drive Northeast and 105th Place Northeast.

A row of trees fell on multiple homes, one of those trees crashed through a home and hit a 19-year-old woman in her bedroom. Neighbors received news on Saturday that she died – it was the news many feared after seeing how a tree sliced through her home, driving her from an upstairs bedroom down to the main floor. 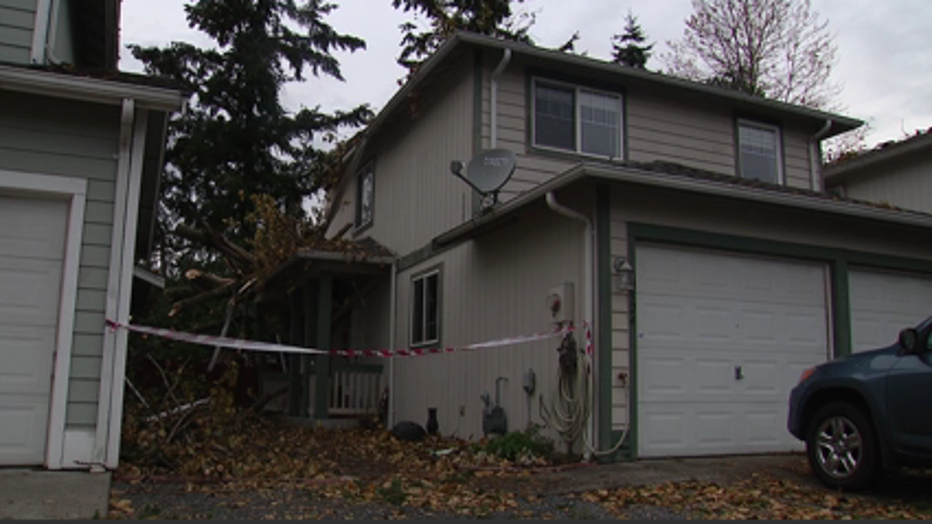 Neighbors say a tree sliced through this Marysville home, killing a teen inside.

"Her parents were screaming for help," said Sani Tala-Taina Sopi, a neighbor who is watching the family’s dog Hunter while they spend time away from the home.

Sopi’s daughter was one of the first people to rush over to the home to attempt to help. She’s a nurse, but was worried by what she saw before paramedics arrived.

According to the Marysville Fire Department, the woman was rushed to Providence Regional Medical Center Friday night. At the time, she was in critical condition – many were hoping for a miracle, that she'd pull through.

RELATED: How to report a power outage

The neighborhood spent much of Saturday trying to pull together, Tala-Taina Sopi was one of the people hoping for a miracle – but the family got a call notifying them of the bad news that same day.

"With the Holidays coming up, and this is what you have to deal with?" said Tala-Taina Sopi. "Especially a child. Losing a parent. I thought that was the worst, but losing a child – I’ve seen my brothers go through that, that was tough."

Despite the devastation, the Sopi family tried to keep things light throughout the weekend.

A number of neighbors were without power until late in the afternoon Sunday – the Sopi family had just returned from a funeral when the storm hit, so they kept their cooking gear out and made dinner for anyone in need.

They ran a generator to help folks charge phones, and kept a fire and a propane heater for anyone that needed warmth.

"For anyone that comes by, we just say: come grab some food!"

If a winter storm is headed your way, you'll want to be prepared for the possibility of long-duration power outages.

Though, Tala-Taina Sopi said it’s hard to shake what they all witnessed on Friday night.

Looking across the street, two other homes were severely damaged – one has a hole in the roof, while the other was damaged badly enough that water was leaking through multiple spots.

The power may be back on, but as the Sopi family explained it: it’ll be a long time until things are normal.