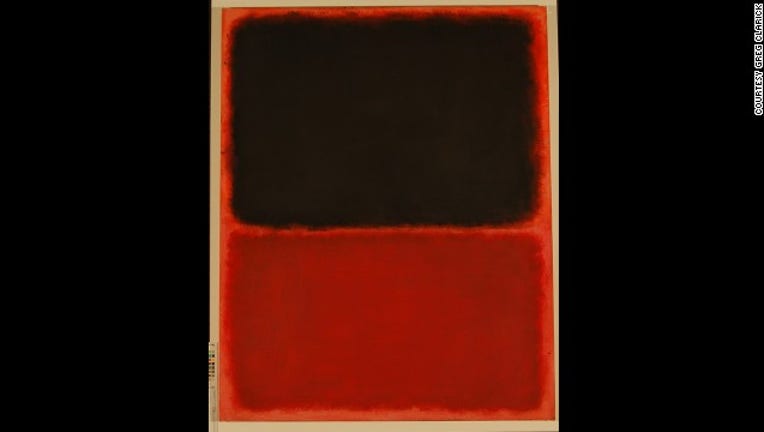 Buyers who paid more than $8 million for this work argue that it's a forged Mark Rothko painting that was part of an elaborate fraud scheme. From CNN.

But in reality, U.S. authorities allege, the works he sold as Rothkos and Pollocks were fakes painted by an artist he met on a Manhattan street corner.

The alleged scheme stretched for nearly two decades, involved several New York art galleries and earned the conspirators more than $30 million, according to an indictment unsealed in federal court on Monday.

Last week, authorities closed in on Bergantiños and his brother, arresting them in Spain, federal prosecutors said. The brothers, according to the indictment, face conspiracy and money laundering charges.

"Today's charges paint a picture of perpetual lies and greed. As alleged, the defendants tricked victims into paying more than $33 million for worthless paintings which they fabricated in the names of world-famous artists," U.S. Attorney Preet Bharara said in a statement Monday. "The Bergantiños Diaz brothers then laundered and hid their illegal proceeds overseas. With today's Indictment, the defendants must now answer for their alleged roles as modern masters of forgery and deceit."

What started with a meeting between Bergantiños and Qian on a New York street corner evolved into an elaborate plot, the indictment alleges.

Qian would paint works in his home in Queens, New York. Then Bergantiños and his associates would peddle them through galleries to unsuspecting buyers who paid millions, the indictment says.

But long before the works of art were sold, according to the indictment, Bergantiños played a role in the forgeries.

Then, after the works were completed, according to the indictment, Bergantiños "subjected many fake works to various processes, such as heating them, cooling them, and exposing them to the elements outdoors, in an attempt to make the fake works seem older than they actually were."

In at least one instance, the indictment says, Bergantiños used a blow dryer to heat up a forged painting.

In an interview with Bloomberg in Shanghai last year, Qian admitted imitating modern masters' works, but said he never intended to pass them off for profit. In court documents, prosecutors allege he received between several hundred and several thousand dollars for paintings the art dealers and galleries sold for millions.

"I made a knife to cut fruit," he said, according to Bloomberg. "But if others use it to kill, blaming me is unfair."

If the lawsuits filed against Bergantiños and his associates are any indication, there's already plenty of finger-pointing over the alleged forgeries.

A number of civil cases against him are still pending, according to federal court records.

It was not immediately clear whether Bergantiños had legal representation or whether Spanish authorities plan to extradite him to the United States.