SEATTLE -- It was two days before Claire's fifth birthday party, and her stepmom Melissa Hunter was in a panic.

Hunter had balloons, party favors and desserts.  She had her house prepped and invitations set. Claire buzzed with anticipation.

"I tend to go all out for parties," Hunter, a professional party and wedding planner, said. "I put all this effort in. I had been talking the party up to Claire. Like, 'just wait until the 31st. You're going to have a good time.'"

But there was one problem: No one was scheduled to show up. All but two of Claire's friends and their parents gave their apologies. Trips were scheduled. Family was visiting from out of town.

Sorry, they told Hunter, that date doesn't work for us.

"I was really scrambling," Hunter said of trying to find guests for Claire's birthday party scheduled for May 31. "I texted people that were more acquaintances. Trying to see if they could show up."

Everyone was booked. The party looked doomed.

That is, until Hunter turned to her West Seattle neighbors for help.

Buy Nothing to the rescue

Facebook group Buy Nothing West Seattle is the kind of hyper-local, community oriented group that harks back to the days of white picket fences, apple pie and knowing your neighbors. As part of the Buy Nothing Project, the rules behind the West Seattle Facebook group are simple. Give freely to your neighbors. Have something that's valuable but don't need anymore? Give it -- don't sell it -- to a neighbor.

"It's a great idea that's very in the spirit of giving," Hunter said. "Instead of selling something on Craigslist or eBay, we post it (on the message board) and give it away to our neighbors."

Though the group is largely devoted to tangible items such as kitchenware or play sets, Hunter thought she would turn to the group's 1,200 members and ask for something different entirely. 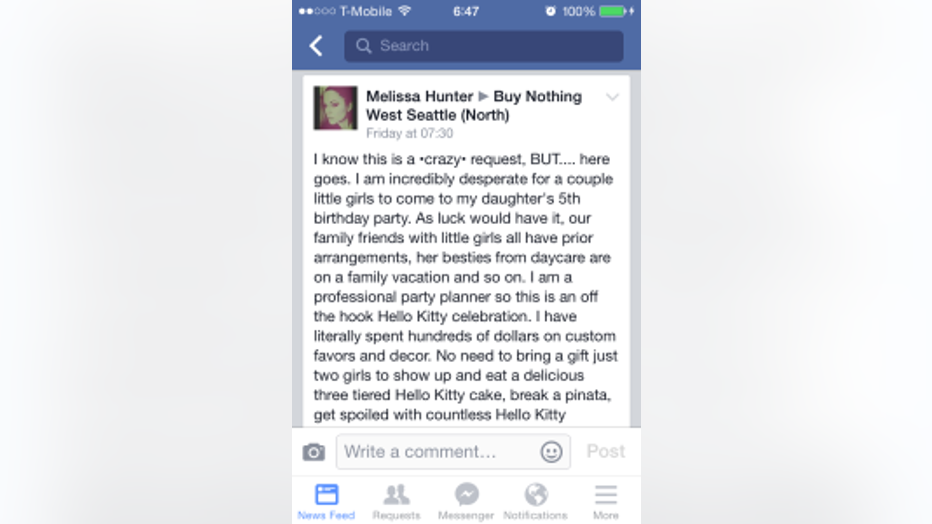 Hunter explained her situation in a post. She had a 4-year-old stepdaughter with an epic Hello Kitty birthday party planned, but no guests. She was looking for two young girls around Claire's age to show up Sunday.  There would be prizes and games and cake. Just two girls to keep Claire company, and help make Claire feel a little special. Could the neighborhood help?

Within minutes, she received a response. Then one more. Then another. Then it took off.

"Within minutes, we had a post that said 'Us and our daughter are down,'" Hunter said. "More than 135 people liked the post, and by the end we had a 180 comments. Thirty families were willing to bring their child or children to our home for the party."

From nothing to everything

By Saturday night, 13 sets of parents and their children committed and scheduled to attend Claire's party. Of course, going from almost no one to 13 children between the ages of 3 and 9 presented a new set of problems.

"I had to get really creative," Hunter said, laughing. "We only had party favors for about five people, so I had to switch it up."

But after some out of the box thinking and a late night, Hunter figured it out. By the time the doorbell rang the next morning, the house was prepped. Shy introductions between Claire and guests she didn't know quickly turned in rambunctious play time between new friends and with the new gifts.

"You know how kids are. They go with the flow," Hunter said. "There was no awkwardness."

With the parents too, Hunter felt comfortable. When asked if she ever felt any hesitation for asking relative strangers over to her house for a party, Hunter quickly lent assurances. Though she didn't know all the parents personally, these weren't exactly strangers. These people lived in the area. They were part of a group that donated time and goods to make the neighborhood a better place.

"All of the parents stayed for the party," Hunter said. "I felt comfortable with all of them. Everyone was helping out. Everyone was genuine."

During the party, Hunter said she made friends with other parents, and set up future play dates for Claire and the other children. Hunter was astounded by the community compassion, the willingness to help a little girl that lived in the neighborhood. She could not imagine a more special day for her stepdaughter.

"When I put her to sleep that night, she said "I love all my new friends,'" Hunter said. "It was so delightfully perfect."

For more on the Buy Nothing Project, click here.