THETFORD, Vt., After Carmen Tarleton's estranged husband doused her with industrial-strength lye, doctors saved her life with a medically induced coma and more than 50 surgeries.

But they could do little about her scar-ravaged face.

She was so disfigured that children ran away from her. When TV news shows did stories about her, they warned that the images might be disturbing and advised viewer discretion.

For four years Tarleton lived with this reality, plus enormous amounts of pain. Then her plastic surgeon at Brigham and Women's Hospital in Boston made a suggestion. He'd recently done the first facial transplant in the United States, and he thought it might work for her. 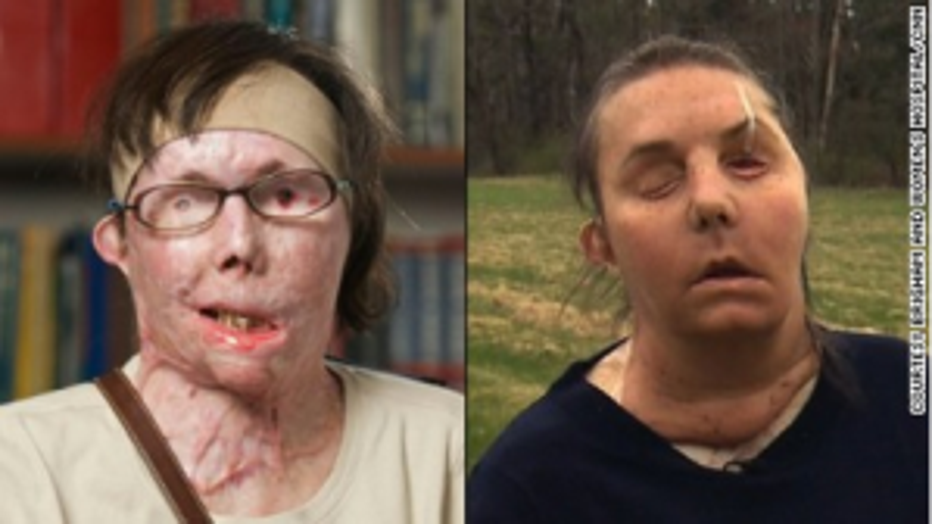 At first the idea sounded a bit strange -- going through life with someone else's face? -- but it didn't take long for Tarleton to say yes, and on Wednesday, Tarleton unveiled her new face at a press conference.

She doesn't know her deceased donor's name but said she thinks about her every day.

"I have conversations with her and let her know how grateful I am," Tarleton, 44, told CNN during a visit Monday to her home in Thetford, Vermont. "I'm thrilled. I'm thrilled with what I've got."

Dr. Bohdan Pomahac had never seen anyone like Tarleton.

The director of the burn unit at Brigham and Women's, Pomahac assessed Tarleton's wounds when she came in after the June 2007 attack. The lye had burned more than 80% of her body, and the burns went deep -- all the way through her skin.

In 2011, Pomahac and his team made headlines when they performed the nation's first full facial transplant on Dallas Wiens, a Texas man who got too close to a high-voltage line while at work.