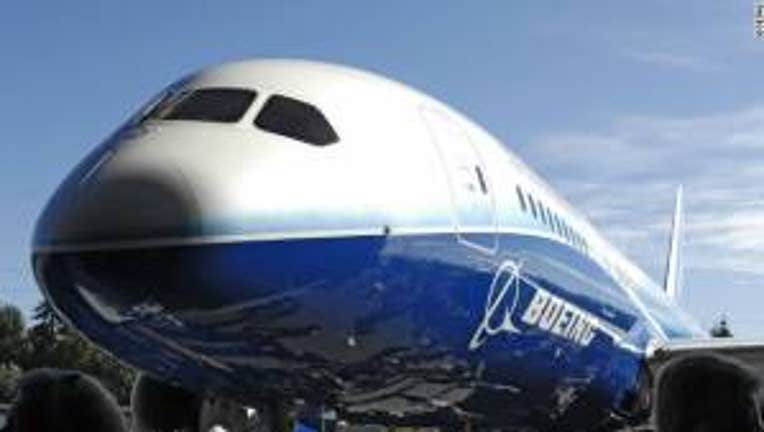 SEATTLE -- The Federal Aviation Administration ordered U.S. airlines Wednesday to ground Boeing 787 Dreamliners until operators of the aircraft can demonstrate that the planes’ batteries are safe and not a fire hazard.

United Airlines is currently the only U.S. airline operating the 787, with six airplanes in service. When the FAA issues an airworthiness directive, it also alerts the international aviation community to the action so other civil aviation authorities can take parallel action to cover the fleets operating in their own countries.

On Thursday, Air India grounded its fleet of six Boeing 787s, it was reported.

United Airlines issued the following statement: "United will immediately comply with the Airworthiness Directive and will work closely with the FAA and Boeing on the technical review as we work toward restoring 787 service.  We will begin re-accommodating customers on alternate aircraft."

Boeing Chairman, President and CEO Jim McNerney issued the following statement: "The safety of passengers and crew members who fly aboard Boeing airplanes is our highest priority. Boeing is committed to supporting the FAA and finding answers as quickly as possible. The company is working around the clock with its customers and the various regulatory and investigative authorities. We will make available the entire resources of The Boeing Company to assist.

"We are confident the 787 is safe and we stand behind its overall integrity," McNerney said. "We will be taking every necessary step in the coming days to assure our customers and the traveling public of the 787's safety and to return the airplanes to service. Boeing deeply regrets the impact that recent events have had on the operating schedules of our customers and the inconvenience to them and their passengers."

Earlier Wednesday, Japan’s two major airlines – All Nippon Airways and Japan Airlines – grounded their Boeing 787s after a battery fire alarm prompted an emergency landing of an ANA flight in Japan. No one was injured. ANA has 17 Dreamliners and JAL has seven.

“As a result of an in-flight, Boeing 787 battery incident earlier today in Japan, the FAA will issue an emergency airworthiness directive (AD) to address a potential battery fire risk in the 787 and require operators to temporarily cease operations,” the FAA statement said.

“Before further flight, operators of U.S.-registered, Boeing 787 aircraft must demonstrate to the Federal Aviation Administration (FAA) that the batteries are safe.  The FAA will work with the manufacturer and carriers to develop a corrective action plan to allow the U.S. 787 fleet to resume operations as quickly and safely as possible,” the statement said.

The in-flight Japanese battery incident followed an earlier 787 battery incident that occurred on the ground in Boston on Jan. 7.  No one was injured in either incident. The FAA’s order was prompted by the second incident involving a lithium ion battery.  The battery failures resulted in release of flammable electrolytes, heat damage, and smoke on two 787 airplanes.

“The root cause of these failures is currently under investigation.  These conditions, if not corrected, could result in damage to critical systems and structures, and the potential for fire in the electrical compartment,” the FAA said.

The ANA flight, which was scheduled to leave Yamaguchi Ube Airport at 8 a.m. Wednesday (6 p.m. ET Tuesday) and to arrive at Haneda Tokyo International Airport at 9:25 a.m., made an unscheduled landing in Takamatsu airport, Takuya Taniguchi said.

In recent weeks, Dreamliners have suffered issues including fuel leaks, a cracked cockpit window, brake problems and an electrical fire. As a result, Japanese and U.S. authorities have launched investigations into the aircraft.

Japan's Ministry of Transport said smoke was seen in the cockpit, but not in the passenger compartment. The source of the smoke is not known. A strange smell was also confirmed. All 137 passengers and crew were safely evacuated, using emergency chutes.

Boeing spokeswoman Lori Gunter said the company is "aware of the event and working with the customer."