Unable to elect Republican leader Kevin McCarthy as the new House speaker Tuesday, the Republicans adjourned for the day in disarray as the party tries to regroup from his a historic defeat after a long, messy start for the new Congress. The House agreed to return at noon Wednesday.

WASHINGTON - What was expected to be a day of triumph for House Republicans coming into the majority turned into chaos Tuesday as interparty fighting over who should lead them in their new reign ended with no speaker in the rostrum.

Republicans failed to elect a speaker after Kevin McCarthy could not overcome opposition from the right flank of his party following an hourslong series of votes on the first day of the new Congress. 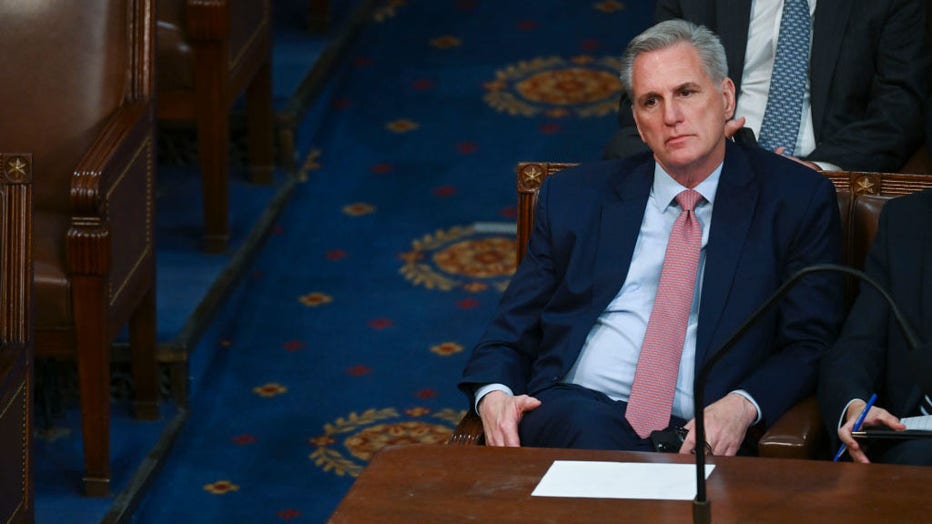 FILE - Rep. Kevin McCarthy (R-Calif.) sits in the House Chamber during the third round of votes for House Speaker on the opening day of the 118th Congress on Jan. 3, 2023, at the U.S. Capitol in Washington, D.C. (Photo by Matt McClain/The Washington

The opposition from 20 lawmakers, including some of the chamber’s most conservative members, to McCarthy's speakership handicapped the House's ability to start its work and delayed the ceremonial swearing-in of hundreds of returning members and freshmen.

GOP lawmakers on Wednesday will try once again to elect a speaker despite uncertainty over how McCarthy could rebound after becoming the first House speaker nominee in 100 years to fail to win the gavel with his party in the majority.

What to know as the House heads into the second day of the speaker election:

Why is there no speaker?

Needing 218 votes in the full House, McCarthy received just 203 in the first two rounds of voting on the first day — less even than Democrat Hakeem Jeffries in the GOP-controlled chamber — and fared even worse with 202 in round three.

A growing chorus of detractors warned for months that the California Republican did not have the votes to win the constitutionally mandated office, which would make him second in line to the presidency. In response, McCarthy negotiated endlessly with members, including Reps. Andy Biggs, Scott Perry and Matt Gaetz, to win their support.

The negotiations went up until Monday night when members of the ultra-conservative Freedom Caucus presented McCarthy with their final offer, which included demands for certain committee assignments in exchange for their votes.

McCarthy refused to oblige, saying he had gone far enough to appease the lawmakers.

"For the last two months, we worked together as a whole conference to develop rules that empower all members, but we’re not empowering certain members over others," McCarthy told reporters early Tuesday.

As a result, those members and more than a dozen others openly opposed him on the floor.

House Democrats have chosen Hakeem Jeffries to replace Nancy Pelosi in leadership. LiveNOW from FOX's Josh Breslow spoke with Dr. Darryl Paulson at the University of South Florida to break down the party's future.

What does that mean for the chamber?

Without a speaker, the House cannot fully form since that person effectively serves as the chamber's presiding officer and the institution’s administrative head.

Swearing in members, naming committee chairs, engaging in floor proceedings and launching oversight investigations will all be delayed until a speaker is elected and sworn into office.

Speaker of the House Nancy Pelosi announced on the floor that she will not seek re-election to a leadership position. Pelosi, the 52nd Speaker of the House of Representatives, has been in Congress, representing California’s 12th Congressional District, for over 35 years. For 19 of those years, she has been in Democratic leadership. Pelosi was also the first woman elected to the speakership in 2007.

How will it get resolved?

It remains unclear if and when McCarthy will pass the threshold to become the next speaker of the House. The current number of Republicans who have pledged support to other candidates is at 20, with some suspecting that list will grow.

The House is scheduled to begin another round of voting for speaker at noon on Wednesday. Once the House is in a quorum — meaning the minimum number of members are present to proceed — the speaker nominee from each party will be read aloud by the respective leaders before a roll-call vote to elect a new speaker.

On Tuesday, Republicans opposing McCarthy nominated a slew of other candidates, including Biggs, Rep. Jim Jordan of Ohio and even former Rep. Lee Zeldin of New York.

"I rise to nominate the most talented, hardest-working member of the Republican conference, who just gave a speech with more vision that we have ever heard from the alternative," Gaetz said Tuesday while nominating Jordan.

To be sure, none of them reached a majority of the votes, but it was enough to detract support from McCarthy, who in a 222-213 majority can't afford to lose more than a handful of votes.

The candidate to become speaker needs a majority of the votes from House members who are present and voting. Every lawmaker voting "present" lowers the overall tally needed to reach a majority.

Should McCarthy come up short again on Wednesday, the clerk will repeat the roll call vote until he is able to garner a majority or a motion to adjourn is approved.

Has this ever happened before?

The last time the House did not elect a speaker on the first ballot was 1923 when the election stretched for nine ballots.

At the time, Republicans had won the majority despite losing a staggering 77 seats, shrinking their margin over Democrats from 171 to just 18. The majority party had named incumbent Rep. Frederick Gillett, R-Mass., to the position, but several other candidates, including a Democrat, received votes during the roll call.

This resulted in a series of ballots over three days before House Majority Leader Nicholas Longworth, R-Ohio, held an emergency meeting with those opposing. Their concern, similarly to those issued against McCarthy, was over a series of rules changes that they believed deserved a fair hearing. Longworth obliged and the next day Gillett garnered the 215 votes he needed to remain speaker.

RELATED: 2024 contest comes into view with hurdles for Republicans and Democrats