SEATTLE - Portland, Oregon, broke its all-time heat record on Saturday. It then broke it again on Sunday, registering a temperature of 112 degrees— besting the record set a day earlier by 4 degrees.

Seattle, known nationally for its mild weather and rainy days, hit 104 on Sunday. The National Weather Service said that was an all-time record for the city and was the first time the area recorded two consecutive triple-digit days since records began being kept in 1894.

And it was predicted that temperatures would be even hotter on Monday. What is going on?

The Pacific Northwest is experiencing a days-long heat wave that forecasters have called "historic," dangerous and a harbinger of things to come as climate change affects global weather patterns. 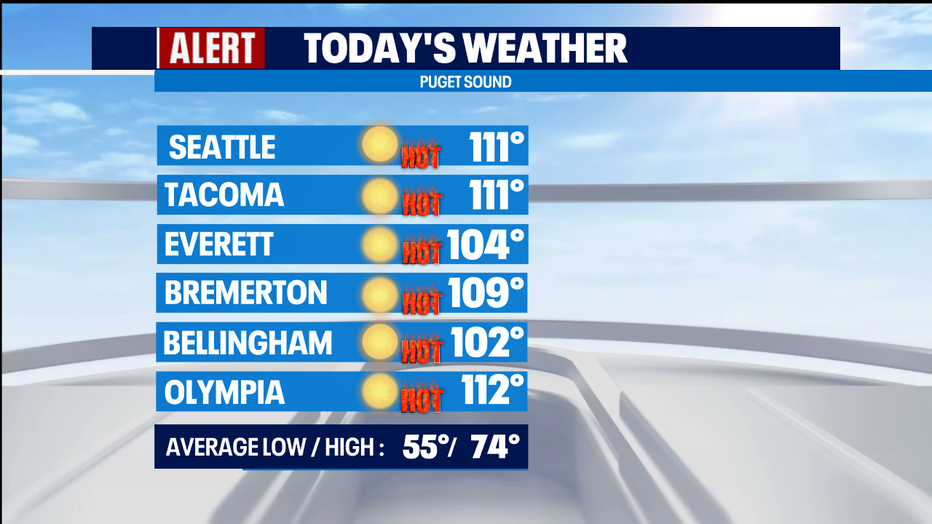 WHY IS IT SO HOT IN THE NORTHWEST NOW?

The temperatures started rising Friday and aren’t expected to cool until Tuesday, with the mercury registering more than 30 degrees higher than normal in many areas of Washington and Oregon. The cause is a "heat dome" that has affected parts of the West for about two weeks. Justin Pullin, a weather service meteorologist in Seattle, said a strong ridge of high pressure is causing temperatures more associated with Arizona than the Northwest.

"The heat that we’ve experienced over the last couple days … is highly unusual and has been historic. We’re talking all time temperature records that are being broken, in some cases by 5, 10 degrees," Pullin said.

ARE THE SCORCHING TEMPERATURES CAUSING PROBLEMS?

Normal routines have been disrupted as governments and private businesses react to the unprecedented weather and try to keep people cool. In Eugene, Oregon, the U.S. track and field trials were halted Sunday afternoon and fans were asked to evacuate the stadium due to extreme heat.

Officials in Portland, Oregon, shut down light rail and street cars until Tuesday due to high temperatures and some districts halted summer school bus service and people braced for possibly the hottest day of the scorcher. And the city’s Parks & Recreation department closed outdoor pools Monday, saying it was too hot and dangerous for employees to be outside.

In Seattle, the school district on Monday canceled summer meal service at schools "to protect our students, families, and staff" so people wouldn’t be venturing out at mid-day.

And there were persistent worries about wildfires in the region that was already dealing with an epic drought. Fire crews were positioned ahead of time in areas where fire risk was high and counties and cities across the region enacted burn bans — in some cases even temporarily prohibiting personal fireworks for the July 4 holiday weekend.

Q13 News meteorologists and reporters take a look at conditions, power outages and have tips for staying cool

WHEN WILL IT END?

People in Seattle generally look forecasts with highs in the mid-80s and cringe. But after temperatures well into the 100s in the region for days it will seem like relief as forecasters say cooler marine air will start moderating temperatures on Tuesday.

"We have one more day of extreme heat across the region before temperatures gradually cool down," said Pullin, the meteorologist.

HOW HAVE PEOPLE BEEN BEATING THE HEAT?

Cooling centers were opened in public libraries, community buildings, malls and elsewhere so people could find indoor spaces with air conditioning. The lack of air conditioning is a concern in Seattle, where only 44% of households have indoor cooling, according to U.S. Census figures. That number has actually jumped lately, as only a few years ago authorities estimated just a third of homes in the Northwest’s largest city had air conditioning.

One advantage that some areas of the Northwest have is access to cooling water — with a large river running through Portland and Seattle being located between an ocean inlet and a large fresh water lake.

People have flocked to beaches and coastal areas, where temperatures have been high but generally milder than more interior parts of the region.