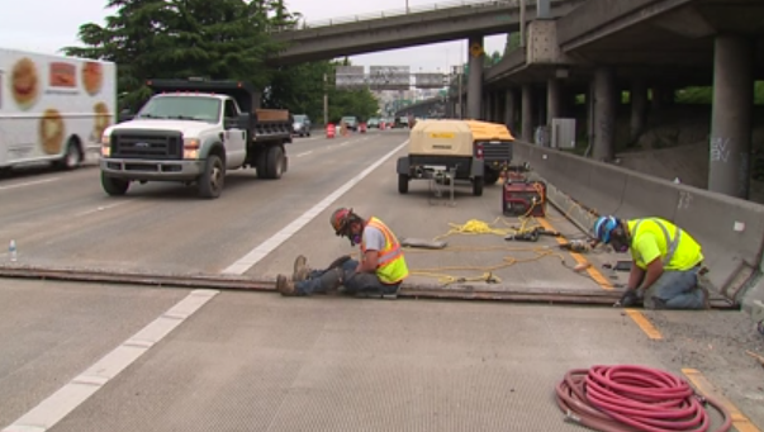 SEATTLE - The Washington state Department of Transportation (WSDOT) is reminding drivers in the Seattle area to expect significant delays on a portion of southbound I-5 near I-90 and Spokane Street this holiday weekend.

The eastbound and westbound I-90 ramps to southbound I-5 will also be closed except for two hours after stadium events, according to WSDOT.

The Revive I-5 construction project got underway Friday evening and was causing half-hour delays for drivers passing through the construction area and a miles-long backup Saturday afternoon.

WSDOT says the work happening July 1-4 marks the fourth weekend of a 16 weekend project to replace 35 expansion joints on the "mainline" and 10 on the ramps that serve I-5.

"This is labor-intensive work, these are people on their hands and knees cutting these old joints out of I-5," said Amy Moreno, a spokesperson for WSDOT Saturday. "Then they will be putting in the new joints, then they have to go back and put cement over it."

Moreno says putting in the new joints should result in a smoother ride once construction is complete. "We get a lot of complaints from people frustrated when they drive through the section," she said.

As crews worked Saturday afternoon, red tail-lights signaled that drivers had to use patience when passing through the construction zone.  Moreno said Saturday that traffic management had estimated an average 35-minute delay in travel time and a four-mile backup for drivers.

"We don’t want to ruin anyone’s holiday by holding them up in traffic, but unfortunately with the amount of work we have to get done," said Moreno. "We just have to work on some of these busy weekends in the summer, that includes events like Pride and Seafair and Fourth of July weekend."

"Originally we weren’t going to work this weekend, but after we lost those three potential weekends we had planned to work, we kind of thought this was a chance to try to do a little bit of catchup on this project", said Moreno

WSDOT started construction later than normal Friday night to avoid impacting those heading out of town.  Construction crews plan to be done by around 6:30 am Monday so that the work doesn't impact those heading to the fireworks or Independence Day celebrations.

"Just beware this is going to be happening every weekend this summer," said Moreno. "We need the patience of people to understand there is going to be some difficult weekends ahead, and we just need to get through this summer and get this work done."

The construction for Revive I-5 is expected every weekend through September. Moreno suggests researching alternative routes like I-405 or the tunnel during construction weekends. Public transportation is also an option. WSDOT says that people traveling to Seattle this weekend are encouraged to use Sound Transit or Metro Transit, carpool or if possible leave early in the morning, before 8:00 a.m., or later at night, after 8:00 p.m.

Multiple lanes on southbound I-5 will be closed this weekend to replace old expansion joints. The highway will reopen by Monday morning.